Illini fall to Cornhuskers on road 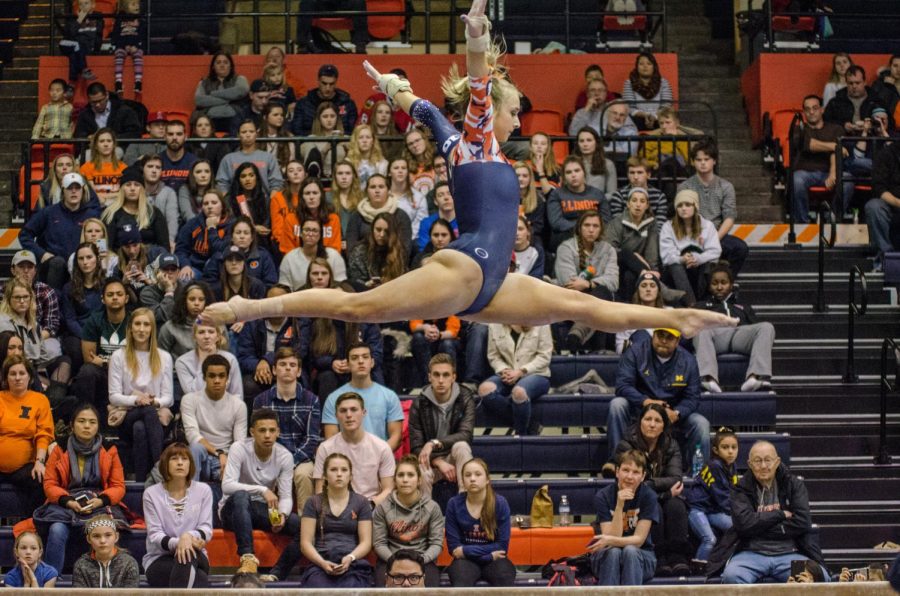 The Illinois women’s gymnastics team faced off against No. 18 Nebraska with a strong grip during the first rotation; however, the Illini slipped soon after, succumbing to the Huskers 197.250-194.675.

The Illini scored an impressive 49.425 during the bar event, the third best score in program history. Sophomore Nicole Biondi and junior Rae Balthazor’s routines scored them a season-high of 9.850 and 9.925 respectively, while senior Rachael Donovan (9.875) and junior Karen Howell (9.900) set their career-highs.

The vault rotation, in particular, cost the team its lead, a characteristic mistake they’ve made before, according to Walsh. This was present last weekend against Maryland, where they lost 48.225-48.500 in the event.

Howell won second all-around, while Balthazor took home first for bars and third all-around. Howell, in particular, was steady and confident throughout the meet, which is, “really great for everyone to watch,” according to head coach Nadalie Walsh.

Consistency by Nebraska in all events provided a challenge for Illinois. The last time the Illini faced the Huskers in a duel back in 2015 ended with a narrow loss of 196.425-197.100.

Despite the outcome, the team has been making strides to improve themselves, according to Walsh. To her, it is important the girls stay “tough” and “positive” so their mistakes do not define and would rather the team use it as a learning experience.

“We wanted them to improve on being more confident and aggressive on beam, and I think what we did all week will help them it just hasn’t quite clicked yet this week,” Walsh said.

The team has two more Big Ten home meets and an away meet in the upcoming Saturdays before the Big Five meet in Ohio. The gymnasts are expected to not just want the best, but to make it happen, according to Walsh. This requires a shift in their mentalities.

“Where they don’t let anything get in their way, so prep them to do that when we go back home, when they fight for us through,” Walsh said.

Illinois’ next meet, at Huff Hall on Feb. 2, includes opponent No. 25 Penn State, who Illinois has defeated consecutively for the last four seasons.