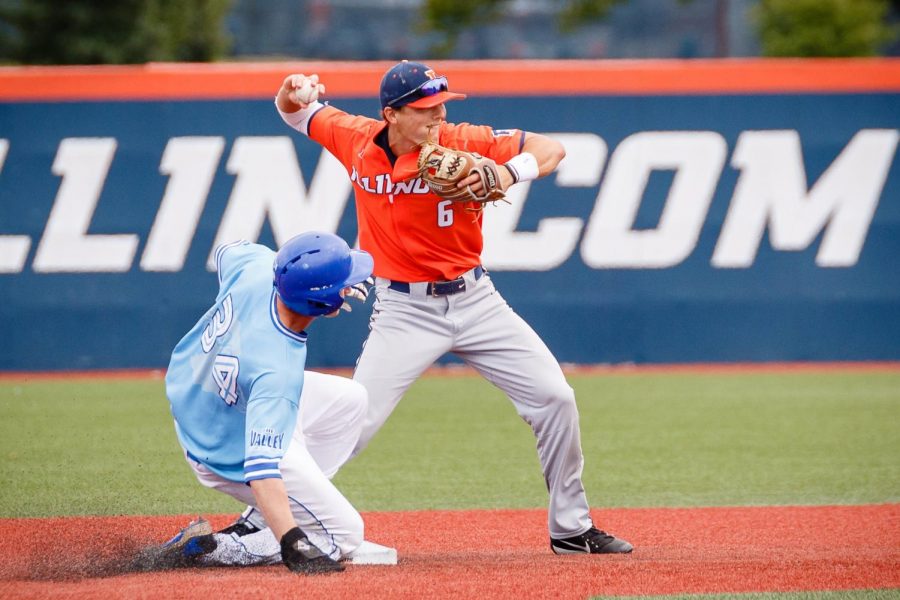 Illinois second baseman Michael Massey throws the ball to first for a double play during the exhibition game against Indiana State at Illinois Field on Sept. 22. The Illini tied 5-5. Massey was placed in the top-10 Big Ten Division I MLB Prospect list with several other Illini players.

Illinois is projected to finish fourth behind Michigan, Minnesota and Indiana respectively in the Big Ten according to D1Baseball.com’s preseason rankings.

The site also projected junior second baseman Michael Massey and junior right-handed pitcher Cyrillo Watson in the top-10 on 2019’s top Division I MLB Draft Prospects list in the Big Ten. The same list, which only includes juniors and seniors, also ranks junior shortstop Ben Troike at No. 12 and senior outfielders Zac Taylor and Jack Yalowitz at No. 33 and No. 40 respectively.

Those statistics are encouraging, especially given the Illini narrowly missed the NCAA Tournament in 2018. After being eliminated by Purdue in the Big Ten tournament, Illinois may have missed out on a trip to Omaha, but the season was still notable.

Bren Spillane update with the Reds

Last year, Illini junior right fielder and National Player of the Year Bren Spillane was drafted in the third round of the MLB Draft, with the 82nd overall pick, by the Cincinnati Reds at a $716,000 value.

Since then, Spillane has played for the Billings Mustangs, the Reds rookie-ball affiliate. In 2018 with Illinois, he notched 22 RBIs, nine doubles, three triples and five home runs in 148 at-bats over 48 games. Spillane is hitting .236 in his first minor league season. However, Spillane was not invited to 2019 Spring Training.