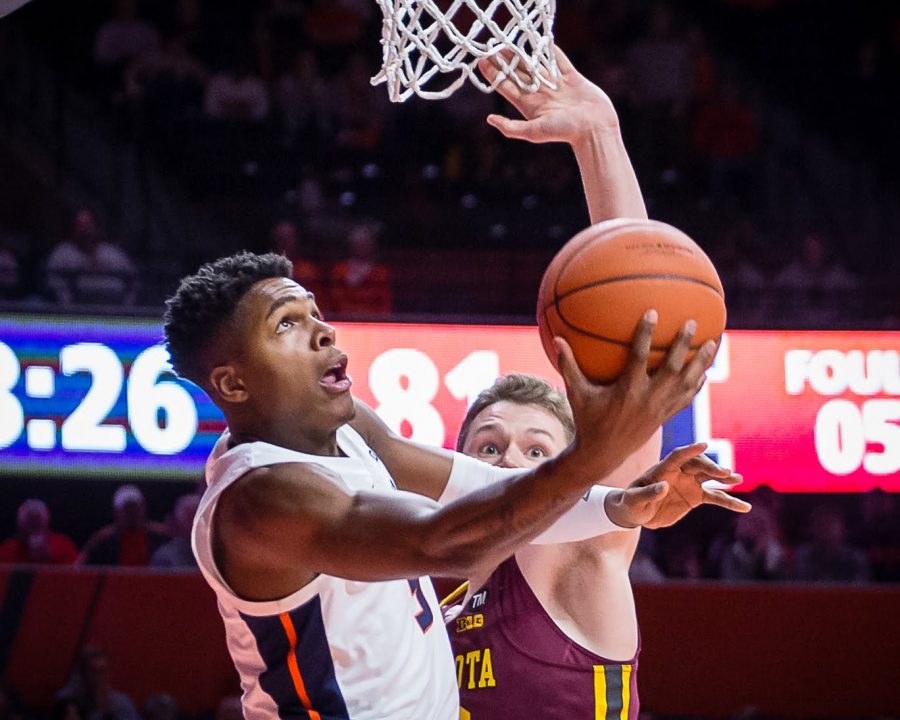 Illinois guard Tevian Jones goes up for a reverse layup during the game against Minnesota at the State Farm Center on Jan. 16. The Illini won 95-68. Illinois beat Maryland on Saturday at Madison Square Garden thanks to Jones.

Head coach Brad Underwood talked up the freshman’s game all season, and he maintained those claims even while Jones was suspended for an eight-game stretch after violating team rules.

His teammates kept telling him he was an important part of the group — the team needed him.

Then Illinois found itself locked in a tight game with No. 13 Maryland at Madison Square Garden.

Illinois had the ball, down 52-48 with 11:53 to go, and the shot clock was winding down. As junior guard Andres Feliz passed the ball off at the top of the key to senior Aaron Jordan, who dribbled to the right, Jones slipped by Maryland sophomore Darryl Morsell, cutting into the paint.

Jordan saw and lobbed a pass over the top of Morsell, and Jones found himself in space. He rose up, thrusting the ball through the hoop for a satisfying one-handed slam dunk.

The move was the exclamation point of a lifetime for a player who came into the program with significant fanfare but had struggled to settle into his role as a contributor.

The dunk was just one moment in a breakout performance for Jones, who exploded for 18 points on 6-of-12 (4-of-9 3FG) shooting (to go along with four rebounds) in what ended as a 78-67 win for the Illini.

In his postgame interview, Jones thanked God and remained humble.

When he walked into the locker room, he was greeted by a swarm of teammates, drenched with water in a celebration pit that was eventually led by Underwood. The head coach was spry in his celebrations after a not-too-distant knee operation.

“That felt great because that’s never happened to me before,” Jones said. “Just knowing that everybody in the locker room is going to be happy for you. Every single one of them in there, they’re my brothers. Just the fact that I know that, it’s good for me.”

The Chandler, Arizona native saw 23 minutes on the Garden floor, bringing his season total to 112.

In five games back from suspension before that, Jones only scored nine total points.

“You’ve seen the progression every day in practice, you’ve seen the confidence,” Underwood said. “He’s had great practices leading up to that. It was just a matter of time. I didn’t know when it was going to come. (The Maryland game) happened to be a great day, to do it in one of the great venues against one of the best teams in the country.”

During his suspension, Jones tried to remain positive and get back in good standing with the team. He put his head down and worked hard.

Jones said he regularly put up extra shots after practice with assistant coach Ron “Chin” Coleman. He watched lots of film, analyzing where he could improve various points of his game, and pushed his teammates as best as he could during practice.

And he never doubted that he would return to the court and help his team when it needed him.

“I believed in myself,” Jones said. “I believed in what the coaches were saying, I believe in my teammates because they were all picking me up. I never had any doubt that I wasn’t going to be able to help the team. I always think positive things.”

Sophomore guard Trent Frazier was thrilled with his teammate’s showing, especially in light of his own eight-point performance at the Garden, below his 13.9 points per game average (though he knocked down a pair of big three’s in the second half).

“I was happy for him, I told him that,” Frazier said. “I told him he’s got to keep working. He knows how important he is to this team. He stepped up a lot. He’s been challenging guys in practice every day, going at us, and I think that’s helping us.”

Now, Jones wants to turn that standout game into a regular occurrence.

Underwood would enjoy that as well, especially as he has hailed the freshman’s game as one that brings a new level of dynamism to the Illinois attack.

“When Tev is on balance, he’s shooting it,” Underwood said. “He’s got such a quick release, that thing looks great coming off his hand. He’s one of those guys that every time he shoots it, you think he’s going to make it. We’ve been seeing that in practice. He’s got another level of his game. He’s got a great shot fake and a little floater and pull-up. He’s a very gifted offensive player. He’s got some freedoms with that.”

Just days before the game in New York City, Underwood defended only playing Jones and fellow freshmen Alan Griffin and Samba Kane a combined nine minutes, calling it a matter of them needing to “pay their dues.”

But he maintained each would be an impactful piece in his program.

For Underwood and Jones, the “surprise” performance wasn’t a surprise. But it sure came at a good time.

“I just told him I’m really proud of him,” Underwood said. “I’m as happy for that young man as anybody. To go through the natural progression and stick with it, pretty proud of that kid.”

All year, Jones has had a knack for picking up cheap personal fouls. It has forced Underwood to take him out of games, making it harder to establish a rhythm on the court.

Against Maryland, though, Jones only fouled twice in his 29 minutes, so he was able to stay on the court.

Jones credited that as a huge factor in being able to produce.

“(I was) being disciplined on defense, staying out of foul trouble,” Jones said. “Once we got the rebound on defense, running the floor, things like that in transition, so it was easy.”

With 10 regular season games remaining, Jones has an opportunity to cement himself as one of the key pieces going forward.Underwood’s quest to take Illinois back to being competitive in the Big Ten and regularly making the NCAA Tournament may have found a new piere.

Frazier did that as a freshman last season, and he thinks Jones is very capable of becoming an instrumental part of the team moving forward, just as he did.

And he’s got some advice for the 6-foot-7-inch winger.

“Just be confident,” Frazier said. “He’s really talented, he can score the ball at all three levels. I always tell him, ‘Just play his game.’ When he messes up, (have a) next play mentality. He’s grown a lot from that and I think he’s going to be really great for us.”