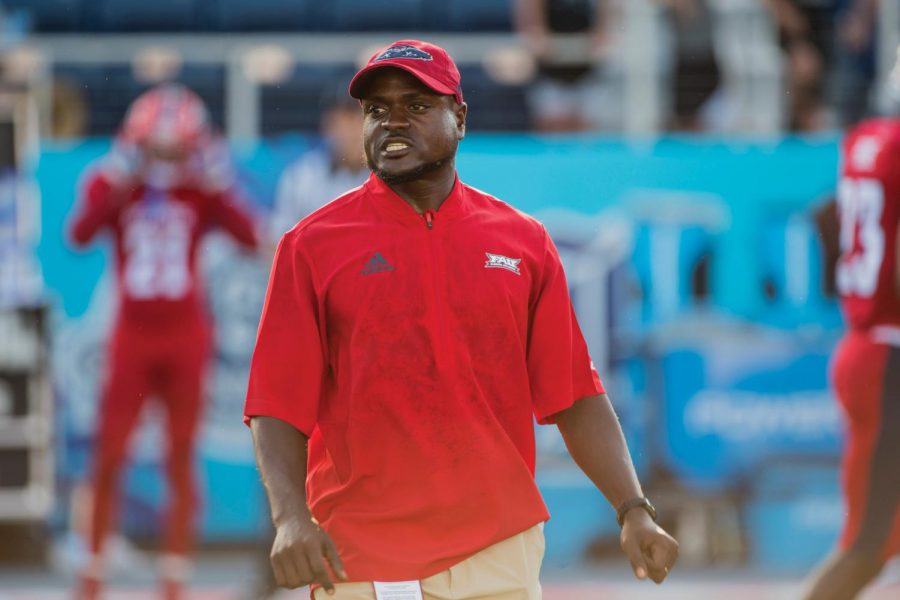 Keynodo Hudson worked under Lane Kiffin at both the University of Southern California and Florida Atlantic University. In 2017, he helped the Owls finish 11-3.

Gone are the likes of former defensive coordinator Hardy Nickerson as well as several coaches who have been in the program for a while, like former offensive line coach Luke Butkus, who joined the Green Bay Packers, and strength and conditioning coach Joey Boese, who joined the Cincinnati Bengals.

In as replacements are Miles Smith, Lovie’s son, to coach the linebackers and former Florida Athletic University assistant Keynodo Hudson to the cornerbacks.

For his part, Lovie is confident in his new hires. He spoke highly of each on National Signing Day last Wednesday.

“Key (Hudson) will be an outstanding addition to the defensive backs room,” Lovie said. “He adds to our strong contacts in the state of Florida and is a fast-rising coach in the profession.”

When it came to his son, a former defensive quality control coach for the Tampa Bay Buccaneers and defensive backs coach on the staff in 2018, it was more about giving credit where Lovie believes it was due.

“Miles proved himself on the practice field and in the meeting room last fall and has earned the opportunity for a permanent position,” Lovie said. “I saw tremendous growth in his coaching ability as the year went on.”

The hiring of Lovie’s son was met with understandable skepticism and grumblings from many outside the program. It’s something Lovie didn’t fully address in the announcement of his son’s hiring. But Miles didn’t shy away from the subject.

“I completely understand the concern,” Miles said. “Nepotism is what it is, I understand how things look. What I will say is, while I understand it, I don’t agree with it. I’m a good football coach in my own right.”

Miles will provide a different type of leadership for the linebackers, with his youth and more laid-back persona.

And he also doesn’t plan on being some firebrand who’s all talk.

“I plan on having the product we put out on the field do all my talking for me,” Miles said. “I’m not a yeller. I’m not going to get in the media and say things I shouldn’t be saying and all that. What I’m going to do is coach my butt off. I’m going to try to work harder than everybody else and everything else that’s supposed to happen is going to happen. I can’t get into that kind of thing.”

Another concern at the surface level of Lovie hiring his son is a lack of recruiting experience, especially as the Illini continue their efforts to turn around a recruiting front which has long lagged behind other Big Ten programs.

As a graduate assistant last season, Miles played a role in recruiting, but he will now be a major part of the staff’s operations, set to focus in on the Houston area as a Texas native.

When compared to the rest of the Illinois staff, Miles thinks he can hit recruits with something fresh.

“I bring youth. I think I bring a different understanding,” Miles said. “Kids are all about the shoes these days and all that stuff. I can call out what shoes they’re wearing. If they’re wearing Air Forces, I know they’re Air Forces so I’ll call them out on that. I think a lot of coaches want to have a certain persona of being above it all. I think getting back down to earth with kids is going to be a good thing. Kids want to be comfortable where they’re playing.”

The biggest change for Miles will be that he can actually hit the road and is not limited to hosting recruits when they visit campus. The goal for Miles is to get young players to understand who the Illinois coaches are as people to make them feel secure about playing in Champaign for four years.

Hudson, for his part, talks a bigger game.

Coming from the Monte Kiffin coaching tree, something Lovie spoke about, Hudson is familiar with Lovie’s football ideology, particularly on defense.

Hudson worked at USC under Kiffin from 2010-12, overlapping with Clark’s time there, and is coming from a promising FAU program, where he was a defensive analyst for Lane Kiffin, Monte’s son.

After recruiting Florida heavily the past two years with FAU, Hudson brings important ties to an Illinois program heavily prioritizing the region, despite only bringing in Seth Coleman from the state in the class of 2019.

“Getting to go around with (the Block I) logo on, this is going to be a tremendous opportunity to bring some primetime talent up here,” Hudson said. “This is going to be awesome, just going to invade the southeast and just pretty much anywhere in the country. Just point me in that direction. Being at the University of Southern (California), I had an opportunity to nationally recruit (while) actually sitting at a desk, and then various times I had an opportunity to go on the road when we went down various staff members.”

Hudson has only been in Champaign for a bit but has already started working closely with Gill Byrd, the passing game coordinator, safeties coach and No. 2 guy on the defense behind Lovie.

Staying in until 10 p.m. has been a normal routine for Hudson so far, working with Byrd to get up to speed.

“We’re just in there studying, doing extra ball,” Hudson said. “Sometimes it’s just me, him and Coach (Lovie Smith), and we’re all in there grinding. It’s awesome. I love it. It reminds me of being in Coach Kiffin’s system again. It’s a great atmosphere.”

Hudson’s biggest coaching opportunity to date is one he feels is fitting for him as a coach but also as a person. He stressed the staff’s integrity as a strong point, like Miles did, and made it no secret he wants to learn from others on the staff.

“It’s a great group of men, and I can’t wait to grow as a man and also as a coach,” Hudson said. “Just so many smart guys. It’s going to be a lot of things that are going to be able to rub off on me from all those guys. They’re all NFL coaches and various college coaches from different systems, and I can’t wait to just dive into it and engulf it.”