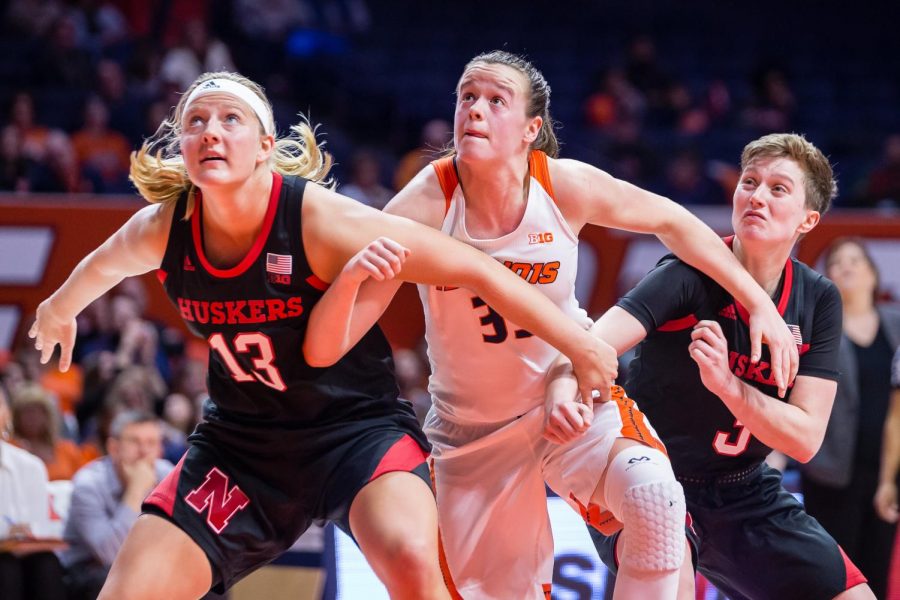 Illinois forward Alex Wittinger fights for position to rebound a free throw during the game against Nebraska at the State Farm Center on Jan. 17. The Illini lost 77-67. Wittinger and junior Brandi Beasley shined in the same against Wisconsin on Feb. 7.

In a battle at the bottom of the Big Ten, Illinois women’s basketball defeated Wisconsin 78-68 at home on Sunday to earn its second Big Ten win of the season. The Illini will now head to Iowa City on a high note instead of a 10-game losing streak to take on the No. 14 Hawkeyes this Thursday.

After a tough game for senior Alex Wittinger and junior Brandi Beasley at Purdue on Feb. 7, the duo shined against Wisconsin, regaining their confidence.

Wittinger injured her ankle at Purdue, only playing 11 minutes and scoring two points before sitting the second half out. While Beasley was not injured, the guard failed to score against the Boilermakers after scoring in the double digits for the previous five games.

Being the Illini’s most consistent players on both ends of the court, Beasley and Wittinger will need to bring their A-games once again Thursday night to complete the upset over the Hawkeyes.

In the Illini’s previous meeting with Iowa at home on Jan. 20, Beasley and Wittinger did just that, recording 21 and 20 points respectively. Freshman Arieal Scott and redshirt junior Cierra Rice also stepped up against Iowa, scoring 15 and 11 points respectively.

“Because you have to give so much attention to Gustafson, you’re constantly in rotations when the shot goes up, and you do have to respect your shooters so the boards really hurt us,” Fahey said. “They scored so many different ways, and that’s tough. If you can get it down to one way, you can play some (defense), but they have so many different weapons.”

This time around, Illinois must focus on locking down Iowa’s senior Megan Gustafson, who put up 27 points against the Illini in the first meeting.

The All-American averages a double-double with 27.3 points and 12.8 rebounds. Gustafson also recorded her only three-pointer this season against Illinois.

While Illinois would love to double-team Gustafson ,Iowa has plenty of other offensive threats the Illini will have to pay attention to. Tania Davis, Kathleen Doyle and Hannah Stewart all recorded double-digit scoring against Illinois.

Davis and Doyle will be perimeter threats as they both recorded three three-pointers at Illinois. Along with Gustafson, Stewart will pose as an inside threat, averaging 58 percent shooting from the field.

Iowa is coming into the contest on a three-game winning streak, most recently defeating Ohio State on the road 78-52. The Hawkeyes are also undefeated at home this season.