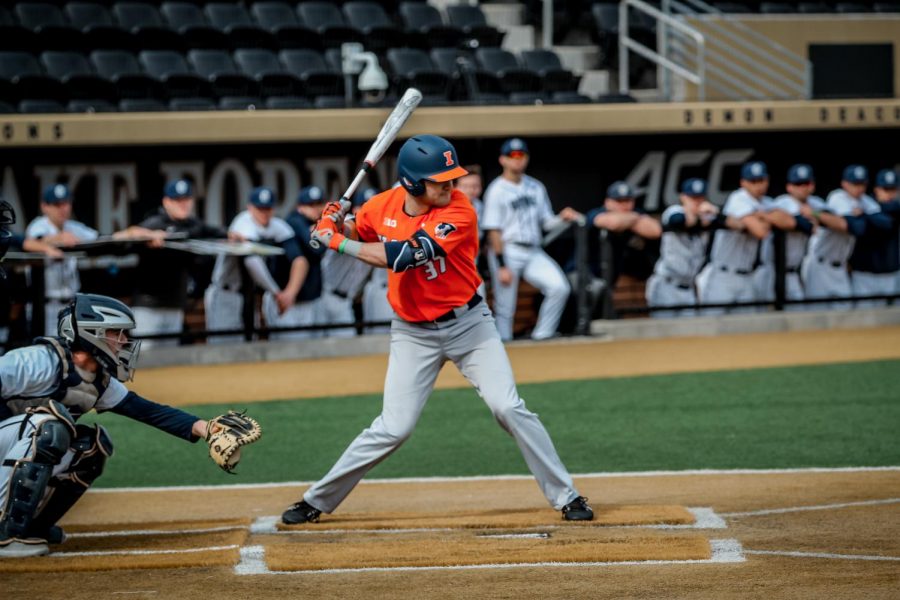 The Illinois baseball team opened its spring campaign with an 11-3 win over Georgetown Friday night. The Illini earned victories over the Hoyas, No. 20 Wake Forest  and Sacred Heart during the three-game series in Winston-Salem, N.C.

“It’s everybody’s first time out as far as outside competition,” said head coach Dan Hartleb. “I expect to win games and for us to play at a very high level.”

According to Hartleb, his team didn’t spend a lot of time looking at scouting reports to begin the season. Rather, they have been focused on playing “consistent” and “clean” baseball, honing fundamentals during practices leading up to the weekend.

Senior outfielder Zac Taylor powered the Illini’s first home run of the season against Georgetown and was one of five Illini with at least two hits on the day. Joining him with multiple knocks were junior Michael Massey, seniors David Craan and Grant Van Scoy and freshmen Branden Comia and Cam McDonald.

After scoring one run in the first and another in the fourth, the Illini batted in two runs each in the fifth, sixth and seventh innings consecutively. Illinois concluded its spring debut by notching three runs in the ninth.

Illinois’ 13 runs marked the most scored on opening day since 2013, when the team glided to a 13-2 win over Tennessee Tech.

The Illini racked up 14 hits, while the Hoyas had just eight. Senior right-hander Quinn Snarskis led Illinois on the mound through the first three innings, allowing four hits, two earned runs and striking out one after facing 19 batters. Snarkis left the game after the Illini and Hoyas were deadlocked in a 2-2 tie, but sophomore lefty Josh Harris relieved him for two-thirds of an inning, picking up his first-ever collegiate win as an Illini.

Junior right-handed pitcher Ty Weber pitched for three and two-thirds innings after Harris, allowing three hits and notching four strikeouts. Freshman right-hander Aidan Maldonado, a 38th round MLB draft pick by the Milwaukee Brewers, closed out the contest by striking out two of the three batters he faced.

Jeremiah Burke started on the mound for Georgetown, striking out just two over five innings while allowing nine of Illinois’ 14 hits and four of their runs.

On Saturday, the 1-0 Illini beat their first Top-25-ranked opponent of the season in a close, well-fought battle, becoming the fifth unranked team to upset a Top-25 program so far this season.

No. 20 Wake Forest fell to Illinois 5-2 thanks to the freshman duo of Kellen Sarver and McDonald’s big hits in the eighth inning.

McDonald led the team with two runs batted in, including the eventual game-winner in the eighth inning, going 2-for-5 at the plate. Taylor was the only other Illini with multiple hits, mirroring McDonald’s 2-for-5 performance.

Senior Andy Fisher threw a no-hitter through four innings before two batters scored in the fifth, accounting for two of the three hits Fisher allowed in addition to seven strikeouts through five and two-thirds innings.

Senior Sean Leland pitched for the next two innings, striking out three of the seven batters he faced. Junior Garrett Acton concluded the game pitching to five batters through one inning and allowing one hit.

Colin Peluse allowed five hits through six innings for the Demon Deacons with one earned run while striking out four batters.

On Sunday, the Illini blanked the Sacred Heart Pioneers 4-0, scoring off all unearned runs. The pitching ensemble of right-handed junior Cyrillo Watson, sophomore lefty Jimmy Burnette for a third of an inning, then junior righty Ryan Schmitt and freshman closer Aidan Maldonado held the Pioneers to just five hits across nine innings.

Watson held the mound for six innings, striking out eight batters but allowing all five of Sacred Heart’s hits. Maldonado pitched the final inning for the Illini, striking out one batter and allowing no hits.

Both teams were scoreless going into the fourth until freshman Cam McDonald grounded out to second, sending Massey into score off an RBI. In the fifth Comia singled down the middle, sending Van Scoy in to score and shuffling Yalowitz to second base.

The next two runs came in the sixth and seventh innings respectively. Sarver’s bat ignited an exciting double play in the sixth off a grounder to the mound, allowing Taylor to score. In the bottom of the seventh, Comia struck out swinging, but sent senior catcher David Craan into score after a throwing error by the Pioneer’s catcher.

Taylor led the Illini’s offense Sunday with a 2-for-4 performance at the plate with one run and two doubles.