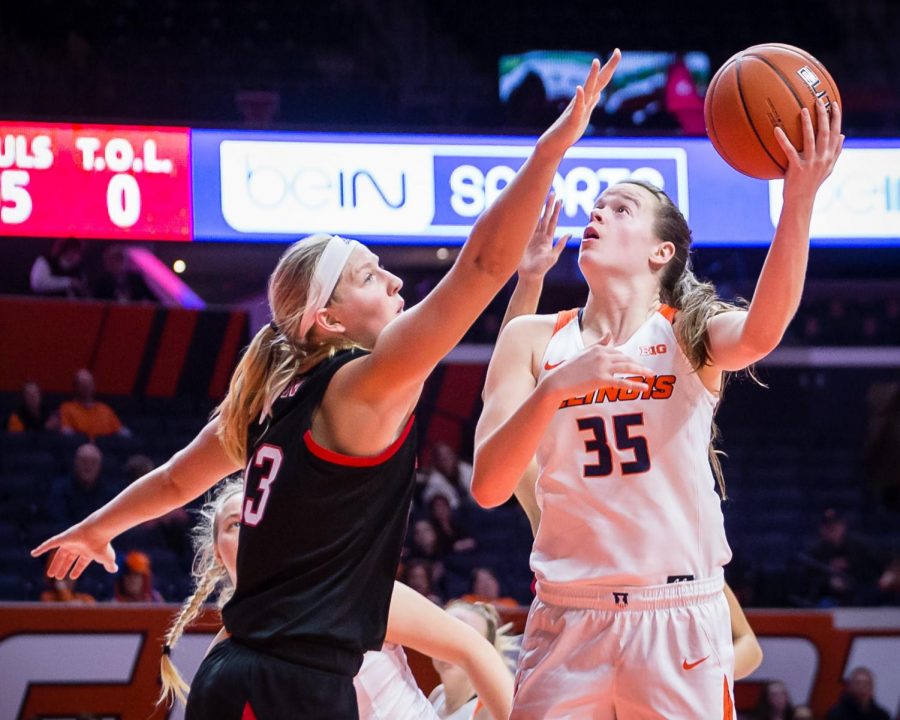 Illinois forward Alex Wittinger goes up for a layup during the game against Nebraska at State Farm Center on Thursday, Jan. 17, 2019. The Illini lost 77-67.

In their first meeting a couple weeks ago, Illinois closed out Wisconsin at State Farm Center for its second Big Ten victory but on Wednesday night, Wisconsin had its revenge on the Illini with a 75-67 win.

In what was another close battle between the bottom of the Big Ten, both teams put up high offensive numbers.

A similar narrative unfolded in the second contest with junior Brandi Beasley leading the Illini with 21 points, her third 20-point game this season. Senior Marsha Howard led Wisconsin’s victory a double-double with a game-high 27 points.

“I thought Wisconsin came out with a different game plan and they were really aggressive with us,” head coach Nancy Fahey said. “They put us on our heels a little bit. I thought we made some good runs back at them, and we made a good surge at the end, but we need to be able to do that more consistently and not be on our heels.”

Howard and Wisconsin freshman Imani Lewis helped control the game by working the Illini in the paint. Lewis recorded a game-high 12 rebounds while Howard had ten. Wisconsin ultimately out-rebounded the Illini 42-27. Forward Kelly Karlis also contributed inside with seven rebounds of her own.

Senior Alex Wittinger, taking advantage of her final weeks in an Illini uniform, recorded her ninth double-double with ten points and 11 rebounds.

At the start of the game, Wisconsin’s offense came out of the gates hot, taking an early five-point lead. However, Illinois took little time to fight back with six Illini scoring in the first quarter to tie the game at 16 after ten minutes.

Both teams locked in on their shot selection in the second quarter shooting above 50 percent from the field. An Andrews three-pointer gave the Illini a small lead midway through the quarter, but Wisconsin quickly responded with a 7-0 run to take a 36-29 halftime lead.

The Illini came out of the break re-energized scoring five-straight points but broke down on defense yet again. The Badgers kept their offensive momentum high with nine unanswered points and 50 percent shooting in the third quarter.

Illinois entered the final quarter on an 11-point deficit but continued to fight for the comeback. Despite Beasley’s 13 points fourth-quarter performance and a 7-0 Illini run, Wisconsin scored ten straight points midway through the quarter to seal the deal.

“(Beasley) came down (in the fourth quarter) and she was really aggressive, hit some big ones,” said Fahey. “We tried to stay in the game as much as we could, but we got ourselves in too big of a hole to start.”

While the Illini failed to keep the defensive pressure on the entire game, their short spurts resulted in 22 points off of 17 Wisconsin turnovers. Wittinger contributed to this pressure on the inside recording three blocks on the night.

Illinois will head back home to host Penn State on Sunday in their final home game of the season.