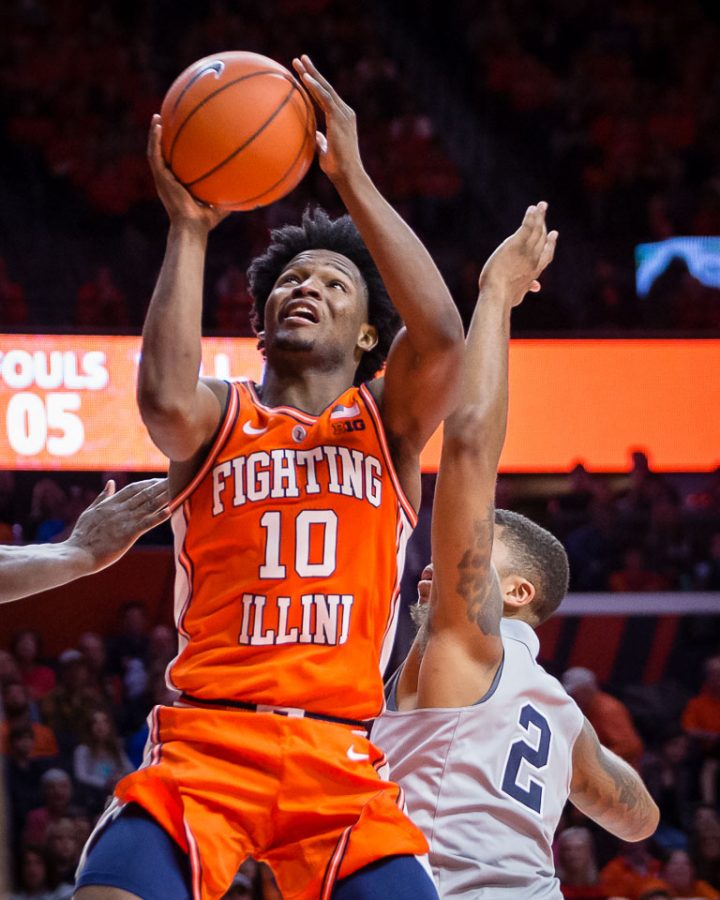 Illinois guard Andres Feliz (10) goes up for a layup during the game against Penn State at State Farm Center on Saturday, Feb. 23, 2019.

With the Flyin’ Illini in town for their 30-year Final Four anniversary and a nearly full State Farm Center crowd on hand, Illinois had an opportunity to put on a show against a bottom of the Big Ten team.

But the Penn State Nittany Lions came into Champaign and put a damper on the lively environment, outmuscling Illinois to grind out a tough Big Ten road win.

For the Illini, winners of five-of-their last seven headed into the matchup, the result was a missed chance to continue to expand on an impressive streak of improved basketball.

Eleven days ago, they stunned then-No. 6 Michigan, pulling off a 75-69 win. With wins over Nebraska and Illinois, the Nittany Lions have won three of their last four and four of their last six games.

But for Illinois (11-16, 6-10 Big Ten, ninth place), the loss is a failed chance to validate a sold-out crowd for a team that is trying to avoid being the first in program history to lose 20 games in a season.

Illinois will have to go 3-1 (or 4-0) in a slate that starts a No. 15 Purdue, back home against Northwestern and Indiana, then at Penn State in a rematch to to close out the regular season before the Big Ten Tournament.

After starting the season 4-12, Illinois has gone 6-4 with several impressive wins, including a stunner at home over then-No. 9 Michigan State.

Most of Penn State’s wins came in the non-conference, but the Nittany Lions have earned some respect in Big Ten play.

Illinois forward Giorgi Bezhanishvili openly expressed his disappointment about being able to put together a win with the ’89 Final Four team present.

“Personally, I’m really sad we didn’t win when they were here,” Bezhanishvili said. “They were really supportive, they pumped us up at halftime. They are the history of this university, that’s what we are trying to be when (we return) in 20 or 30 years.”

Despite the two programs’ comparative lack of success in Big Ten play throughout recent years, Penn State has now downed Illinois in five-straight games with the Illini’s last win coming on Jan. 31, 2015.

The chances to win were there

Underwood was not happy after this one.

“They whooped us, (Penn State) deserved to win the game,” Underwood said. “But when you’re not mentally ready to play, those are the kind of numbers that you have.”

“They played much, much harder than we did in every facet,” Underwood said. “Every 50-50 ball, the aggression, we let Watkins, again, just dominate the game in his minutes. It’s the one thing we’ve got to do, is figure out how to guard a guy like (Lamar) Stevens. He’s a matchup problem and he had his way with us in the first half. Then it led to opportunities, he’s a good player. He makes everybody better.”

Despite 17 points and a 7-of-11 (1-of-1 3FG) shooting clip for junior guard Andres Feliz, Illinois struggled to execute on the offensive end.

The Nittany Lions played physical (26 fouls, 24 for Illinois), and the Illini failed to match their strength and intensity.

Underwood also expressed disappointment with his team’s focus more-so than its lack of execution.

Illinois went just 9-of-18 on layups, 6-of-20 from three-point range and missed ten free throws.

Bezhanishvili had 16 points and 10 rebounds, recording his first double-double, but he shot just 5-of-14 from the field and had three turnovers.

Including a record-breaking 35-point performance against Rutgers, Bezhanishvilli has scored in double figures in his last five games.

But Underwood wants more than just offense from the Georgian product.

“I’m not sure how well he played, to be very honest,” Underwood said. “From my standpoint, the level of expectation I have for him. I’m not trying to be critical of him, it’s great he’s got 10 rebounds, we talked about it. He needed to improve his rebounding. He’s capable of that every night, that should be the expectation, that’s my expectation for him.”

Penn State edged Illinois out in most categories

Penn State didn’t blow Illinois off the court in any one statistic, but it had the upper hand in most aspects of the game.

The Nittany Lions shot 49-percent, hitting 26-of-53 field goal attempts, while Illinois made the same number of shots on 66 attempts.

The margin of defeat would have been made up for had the Illini not missed 10 of its 28 free throws. Penn State mostly took care of business, knocking down 26-of-32 from the charity stripe.

“You can’t miss layups, you can’t miss easy put-backs,” Underwood said. “But free throws are uncontested and when you’re not narrowly dialed in, you miss them.”

While lamenting his team’s general energy level, Underwood credited Stevens, as it was no surprise his team shared the same ails many other Big Ten foes have had with the league’s second-leading scorer (he came into the day averaging 19.5 points per game).

“He’s done that to everybody,” Underwood said. “He’s done that to Michigan, Nebraska, he’s playing as well any combo forward in our league right now. He does it with athleticism and he’s ultra, ultra competitive.”

Penn State turned the ball over 17 times compared to 11 turnovers for Illinois but managed to score 16 points off them, while Illinois scored only 14.

Though Illinois likes to get out on the run, fueled by turnovers, Penn State outscored Illinois 16-9 in fast break points. They also had three more assists (12) and five more blocks (7), while leading in Champaign for all but 5:37 of the contest.

Penn State head coach Pat Chambers noted an increase in quality from the Illinois team he faced last season, though his team has, inarguably, had the better of the Illini in recent years.

“We were able to answer some of their runs and I thought that was the difference,” Chambers said. “Brad (Underwood) is doing a heck of a job. Wow, I watched Penn State-Illinois from last year, and the talent (Underwood) has, Giorgi, (Frazier) and (Dosunmu), they’re really, really talented. It was nice to come out on top today.”

If Underwood and Co. are to avoid another loss where opposing coaches site their improvement and difficult playing style, they’ll have to do it in a challenging environment on Wednesday night at No. 15 Purdue.