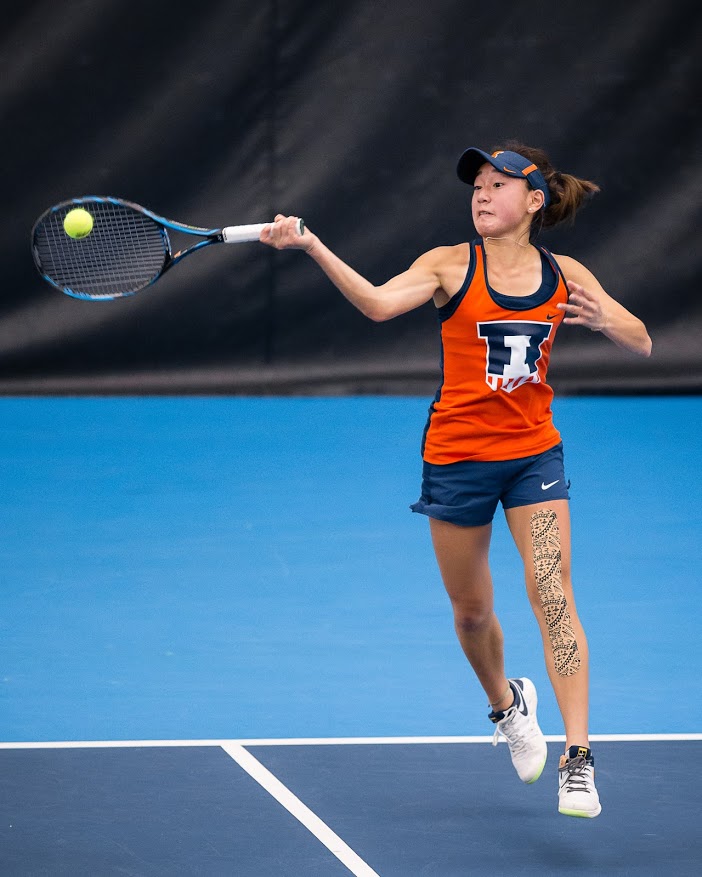 Illinois’ Emilee Duong returns the ball during the match against Notre Dame at Atkins Tennis Center on Friday, Feb. 8, 2019. The Illini won 4-3.

But nearly a month later, the same team hasn’t only won five matches in a row (losing only to Wake Forest 2-5 and Texas Tech 2-4 in weeks since) – it has also broken into the NCAA’s top-25 rankings.

Now, No. 22 Illinois has concluded both of its non-conference road trips and is set to begin Big Ten play March 1 against No. 10 Northwestern. But after finishing last season in the No. 20 spot nationally and third in the Big Ten with a 23-6 overall record, the Illini have been subject to colossal changes in ranking in the last year.

Last year at this time, the Illini were ranked No. 24 in the NCAA. But then, they beat the No. 22 University of Washington Huskies to swap into the No. 22 spot. Shortly after, Illinois found itself adorning the program’s highest ITA/Oracle ranking in school history – the No. 5 ranking among NCAA Division I teams.

But after beating Yale and winning the Blue Gray National Tennis Classic Feb. 24, 2018, the then-No. 5 Illinois fell to No. 14 Northwestern at home on March 2. The team’s ranking dropped one spot to No. 6 and stayed intact through a slew of non-ranked Big Ten opponents including Purdue and Indiana.

The Illini fell to the Michigan Wolverines in the Big Ten tournament semifinals but were selected for the NCAA tournament in May.

The No.19-ranked Illini’s post-season bout marked their 12th NCAA tournament appearance in program history, despite their season-ending loss to the No. 11 Texas Tech Red Raiders, 4-2, in the second round.

Illinois ended its season with the highest win percentage in program history and the most wins under head coach Evan Clark.

And although the Illini have broken into the top-25 rankings recently, the squad returned six members from the 2018 roster.