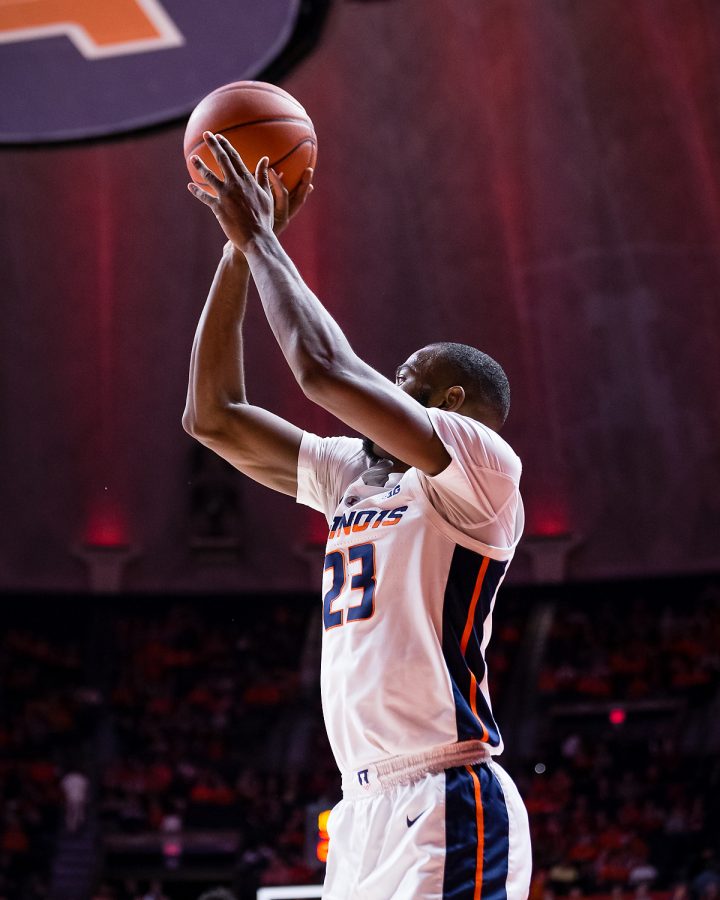 Illinois guard Aaron Jordan shoots a three during the game against Indiana at the State Farm Center on Thursday. The Illini lost 92-74.

It’s official. Illinois has lost 20 games this season, the most in program history.

With the loss, Illinois finishes the conference season in 11th place, setting up a Wednesday matchup against No. 14 seed Northwestern, who stumbled to a 4-16 conference record.

Penn State overwhelmed Illinois down the stretch on Senior Day, in large part due to senior Josh Reaves’ career-high 26 point performance. Reaves put up 10 three-pointers on the day, sinking six. He went 10-of-17 from the field, setting his new scoring mark with a thunderous dunk on a fast break with just 28 seconds to go, putting Penn State up 69-56.

Illinois shot just 34-percent from the field and failed to make any second half three’s after going 5-of-6 from beyond the arc in the first half.

Despite being known for turning opponents over in high volume, it was the Illini who coughed the ball up 18 times on Sunday compared to 16 for the Nittany Lions.

Head coach Brad Underwood credited Penn State’s physical defense as most of why his team was ineffective at the offensive end.

Like in its loss at the State Farm Center to Penn State on Feb. 23, Illinois struggled to contain Penn State forward Lamar Stevens.

He didn’t quite explode for the 25 points and eight rebounds he went for in Champaign, but he put up 16 points and added six rebounds.

“(Penn State is) a very difficult, tough matchup for us,” Underwood said. “Lamar Stevens is one of the elite — if not one of the outstanding — defenders (we’ve faced).”

Illinois saw most of its offensive production from freshmen duo Ayo Dosunmu and Giorgi Bezhanishvili, who each scored 16 points.

Dosunmu went 4-of-11 from the field and 2-of-4 from beyond the arc, while pulling down eight rebounds to lead the team.

Bezhanishvili only went 6-of-13 from the field, missing several short attempts like he did against Indiana on Thursday night. The Georgian native brought in five rebounds but turned the ball over four times.

But the Illini missed 12 of their last 13 field goals and failed to convert chances as the Nittany Lion’s offense largely fizzled out late in the half.

Feliz kicked in nine points on a rough shooting day, going just 2-of-9 from the field. He did haul in six rebounds (second on the team) but also turned the ball over four times.

The junior college transfer has now scored at least nine points in 10 of the last 12 games for Illinois, including his career-best 26 points against Northwestern on March 3.

Illini freshmen Tevian Jones and Alan Griffin had virtually no impact on the contest, though Griffin subbed into the game for less than a minute.

Underwood said he held them out because of the slow tempo of the contest, not for any health or disciplinary reasons.

“(It) didn’t have anything to do with anything other than (it being) a slower-paced game,” Underwood said. “That was my decision.”

Bezhanishvili, who has been playing with a sinus infection for about the last two weeks, said it didn’t really affect his play.

The 6-foot-9-inch forward wasn’t very efficient, but he was more effective than in the teams’ first meeting, where he scored 16 points on 5-of-14 shooting.

“I felt I did a little bit better,” Bezhanishvili said. “None of this stuff really matters when you lose. You’ve got to win. The stuff I did doesn’t mean anything. We have to win.”

Illinois led Penn State at the half, 32-31, despite the Nittany Lions’ 10-2 fast break points advantage.

Underwood said he was happy with the team’s performance and game plan in the first period. For the first time in his coaching career, Underwood also put his team in a zone to open the game.

The idea was to disrupt Penn State’s ability to feed Stevens and Watkins down low, and it worked to some extent.

The Nittany Lions made nine three’s on the day, but it took them 29 attempts to do so.

“We felt like with the matchups being the way they were, that (zone) gave us the best opportunity to win,” Underwood said. “(Penn State) made shots.”

For Underwood, the blame for the defeat rests primarily on the Illini’s high turnover total.

“We felt great about the first half,” Underwood said. “(We were) controlling the tempo, keeping them out of rhythm (and) keeping the ball out of Stevens’ hands. Yet, it felt like we made three or four or five mistakes and had some silly turnovers. You can’t turn it over 18 times on the road, the way we were trying to play with low possessions, and win.”