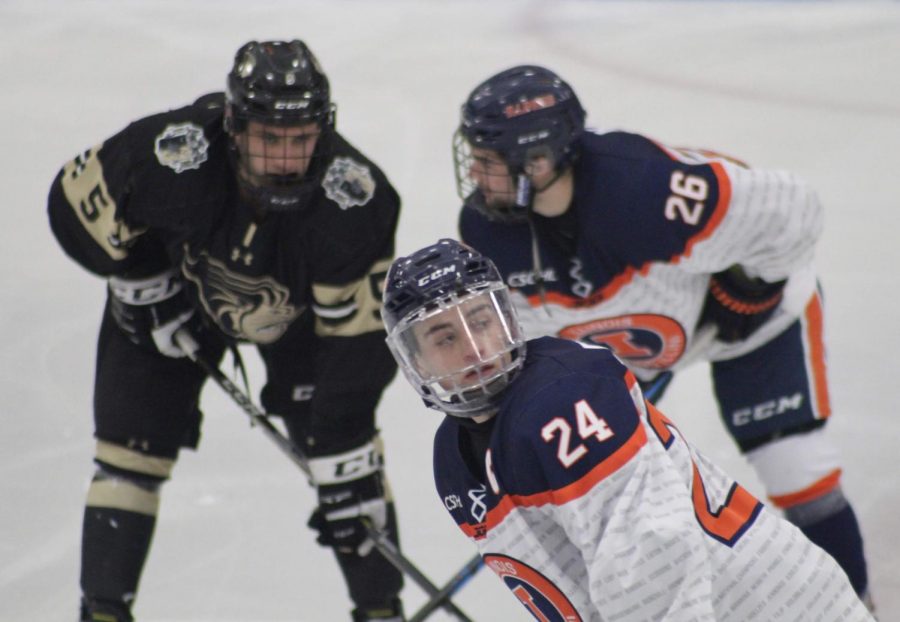 Illinois forwards Bobby Ernsting (front) and Thomas Kolaz (back) face off with a Lindenwood player during the Illinois vs. Lindenwood game at the Ice Arena on Jan. 18. Illinois lost 2-1.

It’s a Saturday night in January at the Big Pond, and the Illini are suited up for a second match against the Midland University Warriors.

It’s hardly a game to stress over. The Illini comfortably won their first match against the Warriors, with a convincing score of 5-0 the previous night. The scores or outcomes of these two exhibition games don’t really matter in the long run, since the regular season officially ended a week ago. Rather, this game at the Big Pond is an opportunity for the Illini to stretch their legs before the upcoming ACHA Tournament.

“I thought we closed the season really well,” said assistant coach Pierce Butler. “We had ups and downs along the way, and I think the gauntlet of our schedule being top teams along the rest of the way forced us to play good hockey. Even in the games we’ve lost most recently, the guys still answered the bell, and we played really good. The work ethic has always been there, but now the team is starting to find ways to win against high-end teams, so I’m really happy with the way we’ve been playing.”

As the first quarter began, the Illini grabbed control over their opponents. After five scoreless minutes, Illinois’ pressure caused the Midland defense to collapse. A pass from Thomas Kolaz turned into an easy shot for Bobby Ernsting and put the Illini up 1-0. The crowd, as it has for every home goal of the season, gleefully chants “You suck!” toward the Warriors goalie.

Nearly four minutes later, another goal by Ernsting came and improved the Illini’s lead, 2-0. Less than two minutes later, a small scuffle ensued between the Illini’s Healy and another Midland player but was quickly broken up. The Warriors, more pumped up, began to force the issue on offense, but the Illini defense held steady and shut them out during the first period.

By the end of January, the Illini were in a tough spot.

After dealing with countless roster turnover due to injuries, combined with a tough part of the schedule, Illinois dropped four-straight against Lindenwood and Iowa State, respectively. During the month, the Illini struggled mightily, going 2-6 across their eight January games.

The second period was nowhere near as explosive as the first was for Illinois. Nonetheless, Midland remained helpless, keeping the puck away from its side of the rink and struggling to get anything going on the offensive end. The Warriors nearly got their first goal of the night, around the 5:13 mark of the second quarter, but the shot deflected and waved off. The Illini held their lead steady at 2-0 going into their final period.

With the season in a downturn at the end of January, the Illini slowly started to get back to winning in February. Kicking off the month with a split weekend against Minot State and Ohio University, Illinois swung the momentum of its season with a shootout win against Ohio.

This inspired a five-game win streak, one the Illini technically extended to six with their following win against the Warriors Friday night.

“Any time that there’s a game with a bunch of penalties stitched into it, you have choppiness get into the play. The second, we had some power plays that we didn’t get momentum off of,” Butler said. “I thought we fell back early in the third, but the guys came back and had some timely goals at the end. They stuck with it, sometimes it takes all period, but we got it done in the end.”

Then it came to the third period.

Off a power play opportunity, Midland scored its first goal of the evening, cutting Illinois’ lead 2-1 at the 15:34 mark. After sitting comfortably with a 2-0 lead, Midland went on another quick run that tied up the score at two apiece with 13:45 left to play.

Suddenly, the game went from a controlled, steady victory into a frenzy. The ensuing 10 minutes were a back-and-forth affair, but the Illini quickly stole momentum as the game closed. With 2:22 left, Jack Healy scored a goal that put the Illini back up by one, and a second goal from Kacper Ryba just over a minute later erased everything the Warriors achieved. The Illini walked away from the Big Pond with a 4-2 victory.

“It’s nice that you go into tournament playing on the right foot. You don’t want to go in there with a loss or playing the wrong way, so it’s huge,” Butler said. “In this game, we want to take it one step at a time, and I’m pretty sure everyone in the locker room is feeling pretty good.”

The Illini now have seven straight wins. But after closing the regular season with five, Illinois finished 19-17. The resurgence netted the team the No. 11-seed and a first-round matchup against the No. 6-seed Minot State. It’s a rematch of last season’s 2018 semifinals, where the Illini left the rink victorious.

This season, the Illini went 1-1-1 in three heavily contested games against the Beavers. The battle is won now, but the real war starts in two weeks.

“We’ve seen them four times now this year. They’re a big team. They’re heavy and they play smart,” Butler said. “So we’re looking to play some hard-nosed hockey. It’s going to be a battle. We’re excited to play them. We know what they have, and we know that we like our speed, and when we move off the puck, we’re a pretty dangerous team.”