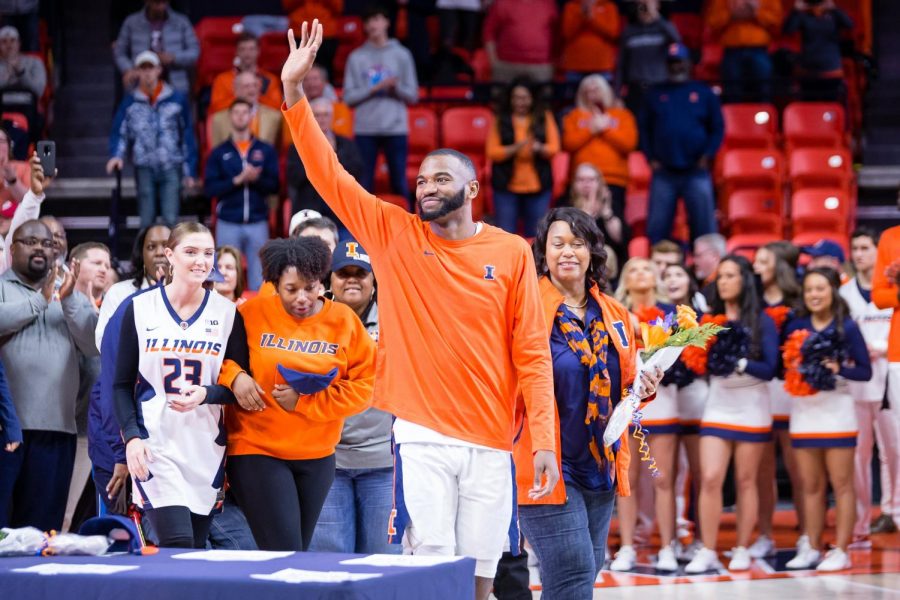 Illinois senior Aaron Jordan waves to the crowd as he is recognized before the game against Indiana at the State Farm Center on Thursday. The Illini lost 92-74.

A lot has changed in the Illinois basketball program since Aaron Jordan committed in 2014.

At that time, the Illini were fresh off an NCAA Tournament appearance. John Groce was in his second year as head coach, and the program was regarded as one that would be dancing perennially in March.

Today, not much remains from Groce’s tenure, and the perception of the program regionally and nationally has fallen significantly. Even the State Farm Center has been renovated.

Now a senior on second-year head coach Brad Underwood’s squad, Jordan has ridden out a tough career in Champaign.

In Groce’s final year, Jordan saw his playing time drop to less than seven minutes per game, a frustrating development for a prospect who expected to be contributing more after averaging 11.4 minutes in his freshman campaign.

After Groce was fired and Underwood was brought on, there was a mass exodus of players leaving Illinois, and a new crop of talent came to town.

No one would have blinked, much less blamed him, if Jordan had decided to take his talents elsewhere. But, somewhat surprisingly, the 6-foot-5-inch wing elected to stay at Illinois and carve out a role in Underwood’s guard-heavy system.

“That was probably one of the best decisions in my life, other than coming here in the first place,” Jordan said. “That was a difficult time; it was for a lot of people. But it was nothing I couldn’t get through.”

Jordan played his last game as an Illini at the State Farm Center on Thursday.

He went 4-of-10 from the field in a loss to Indiana, knocking down 3-of-7 three-point attempts and scoring 11 points in his 27 minutes on the floor.

It wasn’t a showstopper of a performance, but he did finish slightly above his 8.2 points-per-game season average. However, he couldn’t do much to thwart the Hoosiers, who won 92-74.

But those are the contributions Illinois has come to expect and rely on from Jordan during a senior campaign in which the one-time catch-and-shoot-only guard has come into his own in other areas of the game.

“I’m definitely more mature,” Jordan said. “Not just being an offensive guy, being a defensive guy, too. Rebounding and things like that. In high school, I definitely wasn’t thinking about that. I told myself, ‘I’m going to stand in that corner, and when the ball comes, I’m going to shoot it.’ Nowadays, it’s doing all the little things, doing everything, making myself the best player I can be.”

Jordan is trusted for his sharpshooting, of course, but also for his above-average rebounding production as a guard, his defense performance and his decision-making.

He played in every game as a junior, earning six starts, and as he has come along in areas besides shooting — he still leads the Illini with a 40.6 percent three-point clip — he’s seen an increased role.

The Plainfield East product has made 28 starts in 30 games, third behind only Giorgi Bezhanishvili (30 starts) and Ayo Dosunmu (29 starts).

Underwood has never been hesitant to offer his thoughts on his players, whether he’s leveling praise or criticism.

“(Jordan is) rebounding at an unbelievable clip; he’s driving the basketball at a much higher rate,” Underwood said. “He’s become more than just a shooter. He puts the ball on the floor, which, last year, he didn’t do very well. His passing has improved. I think every facet of his game has gotten better, and we haven’t been bashful in terms of asking him to do those things. Everybody knows he’s a great shooter. There’s a lot more to his game than that, and we’ve been able to see that and experience that.”

Jordan’s contributions have gone beyond on-the-court production though. He has emerged as a veteran leader on a very inexperienced roster.

Unlike other programs, Illinois has relied heavily on younger players — Dosunmu, Bezhanishvili and sophomore Trent Frazier — to play big roles as not only producers but also leaders.

Some players wouldn’t enjoy sharing leadership responsibilities with players who are two or three years younger than them.

But Jordan seems to have embraced a sort of elder statesman role, while also allowing the bold personalities and energy of his cohorts to thrive next to him.

Bezhanishvili described Jordan’s leadership ability as a two-part thing based on his ability to lead by example and show the team’s other guys how they should lead but also based on him being an attuned listener.

He hasn’t held back, Bezhanishvili notes.

“He’s not like, ‘OK, these young guys don’t know anything, and I’m not going to let them say anything. I’m just gonna lead by myself,’” he said. “He didn’t do that. He’s been vulnerable.”

Bezhanishvili, a vocal guy known for his odd antics and friendly persona, admires the way Jordan carries himself and his responsibilities.

“When we have to say something, he listens,” Bezhanishvili said. “Obviously, we listen when he says something because he has been here so long. That’s really a powerful thing to have, especially as a basketball player, a dominant basketball player, to be vulnerable to other people. When we say something, when Ayo says something, Trent, me, he just listens. He absorbs it, and that’s a really powerful thing he has. I really appreciate it for him. Not just in basketball, just in general. That will be a great thing for him.”

For his part, Jordan has embraced the daily grind and everything that has come with being a part of the Underwood rebuild, something he could never have foreseen when he committed to Illinois four years ago.

If someone is slacking off, Jordan will let them know. If a teammate needs to be picked up after a rough sequence, Jordan is there. And when the team’s joking around or celebrating a big win, he’s right in the mix with everybody else.

But Jordan isn’t usually the guy commanding his teammates around the floor, or even the one breaking it down at the end of huddles.

He lays his legacy on being a guy his teammates can look to as a leader and a peer, as well as on a big part of the foundation of Underwood’s system and philosophy.

“I enjoyed it; it was amazing actually, to be honest,” Jordan said. “Knowing that I’ve been through it and now I get to be that person that paves the way, it’s something I took pride in; it’s something I enjoyed with these guys. Never a dull moment around these guys; they always seem to amaze. I learned a lot; it’s made me grow as a person, so I’m thankful for that.”

Looking back, Jordan has gotten stronger, become multidimensional and even scrapped his scruffy beard for a more chiseled, defined goatee.

He’s changed a lot since arriving in Champaign, facial hairstyles aside.

And although his Illini playing days have come to an end, Jordan has no regret in his heart.

“I had no idea what I was doing at that time (when committing), but I just knew I loved to play basketball,” Jordan said through a laugh. “At that time, I didn’t know this opportunity would be available to me. I’m just thankful. All the hard work back then, it started before that, but during that, I was still working. It paid off.”

When assessing Jordan as a player and as a person in his program, Underwood’s eyes began to glisten a bit.

“He’ll be the guy I never forget, because he’s been part of the solution,” Underwood said. “Our record is not going to show, or it doesn’t show right now, how much we’ve improved and how much better we’ve gotten. I love going to practice every day because I love the guys in the locker room. (Jordan) is a big part of that. He’s a guy that, his leadership, his commitment, his dedication, his improvement is everything we want this thing to be about.”