Illinois to face Northwestern in first round of conference tournament 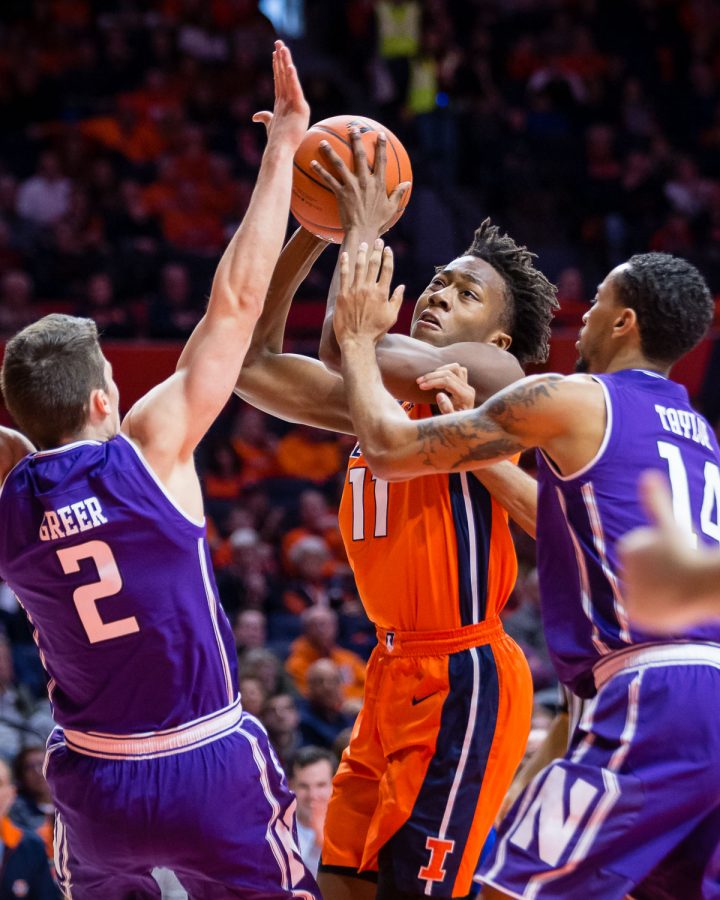 Illinois guard Ayo Dosunmu (11) draws contact on his way to the basket during the game against Northwestern at State Farm Center on Sunday, March 3, 2019. The Illini won 81-76.

Illinois and Northwestern have played each other twice this season, with each team winning at home, but Wednesday’s contest at the United Center will have different stakes as the Big Ten conference tournament begins.

Neither team comes into this one in good form, as Illinois has lost five of its last six games and Northwestern has dropped 11 of its last 12.

“It’s either play or end your season,” freshman guard Ayo Dosunmu said. “That right there should be motivation enough if you really love the game.”

The Illini realize, as is often the case in single elimination formats, things tighten up around this time.

With two games played and each result being tight, there is not much to give in this best-of-three decider for the season series.

Head coach Brad Underwood feels that his team has already done most of the preparation for Northwestern, especially since the Wildcats came to Champaign only ten days ago.

At this point, understanding an opponent gets down to a deeper level than just knowing which players to stop and the types of plays to run.

“Most of the time the games slow down, the games become a little more planned out so to speak,” Underwood said. “As you become more familiar with teams, you understand personnel.”

It’s no secret that Illinois puts a lot of emphasis on turning over opposing teams. Underwood has long made it a point of emphasis, and the Illini are No. 3 in the Big Ten in turnover margin (plus-2.9) and force a league-high 16.1 turnovers per game.

Northwestern turns over the ball 12.1 times per game, which sees them come in at No. 7 in the conference in turnovers per game.

Last time out against Illinois though, an 81-76 loss in Champaign, Northwestern turned over the ball just eight times.

Head coach Chris Collins said after the game he was both pleased and rather surprised with the low count.

Illinois has struggled a bit lately to force opponents to turn the ball over at the same rate as earlier this year.

Against Penn State on Sunday, Illinois forced 15 turnovers but coughed the ball up 18 times themselves, which gave the Nittany Lions room to dominate Illinois in transition.

Underwood doesn’t think that line is a mark against the team but rather a factor of personnel.

“We’ve turned it over a little bit more,” Underwood said. “We had a great run where we were turning it over eight, nine, ten times a game. (Sunday) was really uncharacteristic with 18, but I think that has to do with matchups as much as anything.”

Northwestern, for its part, will rely on its veteran core to once again avoid letting turnovers become a factor.

“When you start looking at the numbers, they really haven’t turned the ball over for a team that’s not playing with a true point (guard),” Underwood said. “Chris (Collins) has done an unbelievable job of managing that situation.”

The Illini are determined to keep the Wildcats from getting open shots, especially beyond the three-point line, where they hit seven three’s against Illinois on March 3.

But if Northwestern connects on a line similar to the 7-of-28 mark from that previous meeting, Illinois is set to benefit.

Northwestern is shooting 31.7 percent from beyond the mark on the year and has struggled to score consistently, coming in ranked last in the Big Ten in scoring offense (65.8 points per game).

Underwood puts it all up to executing in a few key areas.

“I think they’ve got two of the elite players in our conference in Pardon and Law,” Underwood said. “We can’t give them threes, they got some great looks in the second half of that game. And we’ve got to stay aggressive. We’ve been able to get out in transition, get some easy baskets. In postseason play, it’s about rebounding and getting to the foul line.”

It remains to be seen whether senior Vic Law will play on Wednesday, after leaving the Wildcats’ season finale with a leg injury that required stitches.

Nevertheless, Illinois is well aware of the stakes. Wednesday’s loser will end its season on a low mark, with each team well out of postseason consideration.

Dosunmu wants his teammates simply to focus on the present and maintain a firm confidence.

“I try to tell the players in the locker room, you’ve got to take the good with the bad, never get too high or never get too low,” Dosunmu said. “Play it game-by-game. We know what we can do. We lost a lot of close games, but that’s over with.”

Dosunmu thinks this contest will be decided more by non-basketball factors than tactical strategy or personnel adjustments.

“We have to just come out and play,” Dosunmu said. “Games like this, really the scouting report doesn’t matter. Everyone knows what everyone is doing. I can name their plays off the top of my head. That isn’t going to really make a difference, but just playing hard, executing, diving on loose balls. Who’s tougher?”