Team ready to play after cancellations 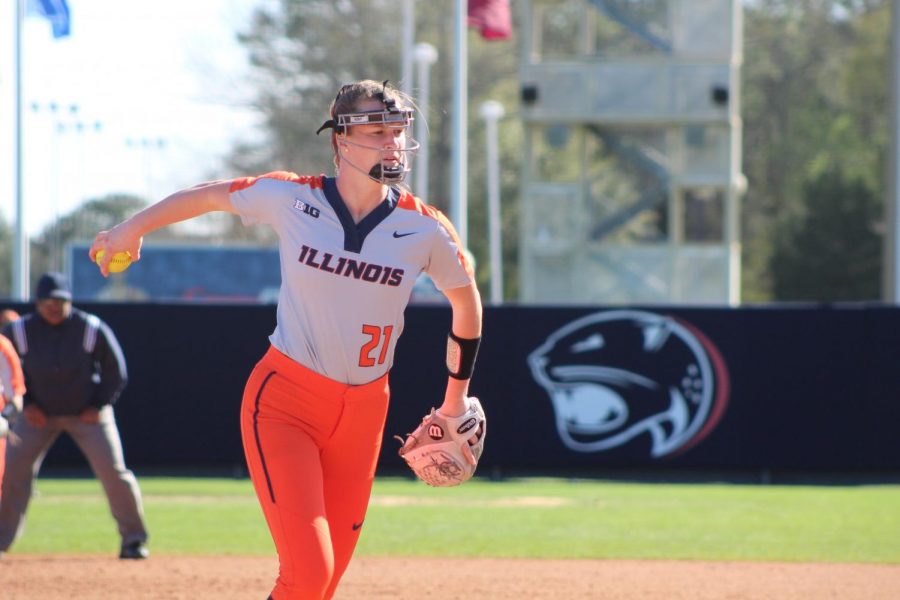 Freshman pitcher Sydney Sickels winds up for a pitch against Nichollas States at the Mardi Gras Classic in Mobile, Alabama. The Illini went on to win the game 5-3 as Sickels continues a strong start to her first-year campaign.

The 12-4 Illinois softball team will travel to Los Angeles this Friday to take on the University of California, Santa  Barbara, California Polytechnic State University, Oklahoma University and Loyola Marymount.

The Illini look forward to playing a full tournament after their last two games against the Syracuse Orange and McNeese Cowboys were canceled due to cold weather.

“It’s pretty tough because we weren’t expecting it. We knew that game against McNeese would be canceled since the weather was very poor, but we were in a position to play the (Syracuse game),” said head coach Tyra Perry. “But those things happen; you just have to kind of move on. That’s why you do have to take advantage of every opportunity that you do have to play. I think this has helped us to be more motivated in practices, and hopefully we’ll see that pay off this weekend.”

What made matters worse for the Illini were their games being canceled off the heels of a 5-2 loss to the Seattle University Red Hawks, forcing the team to end the tournament with the taste of defeat lingering in their mouth.

“We’ve been struggling a little with our defense and maybe consistency in our pitching as well and those things kind of play together,” Perry said. “So if we can start to figure that out, we have the potential to have a great defense. We have the tools we need to have (and)  one of the top pitching staff in the country. We just need to see it come together.”

Fortunately, Perry  is not too concerned about the issues since her trust in the senior leadership on the team is strong. According to Perry, issues can be ironed out quickly.

The last time Illinois won was on March 1 against Tulsa, which ended with a score of 6-4. Freshman pitcher Sydney Sickels was credited with the start and subsequent win after allowing only three earned runs in six innings pitched while also striking out three batters.

Perry has been pleased by Sickels’ growth as a player and her developing leadership style.

“She doesn’t say much but her actions are definitely leadership quality,” Perry said. “As a freshman on the mound, it’s a big job, and I think she handles it with poise and grace. She basically does her job; whatever (assistant) coach Lance (McMahon) calls, she pitches it. She has a little bit of a quiet swag about her which is cool to see.”

Looking at this upcoming weekend, the Illini are not anticipating big challenges at the start of the tournament. Illinois will play UCSB and Cal Poly first. The two teams have a combined record of 10-34 compared with Illinois’ 12-4 record.

However, the weekend gets tough in the middle part of their schedule as the team will take on 20-2 Oklahoma and 13-9 Loyola Marymount. The Sooners are on a 10-game winning streak while the Lions are on a three-game win streak of their own.

It’ll be up to pitchers in the bullpen, like Sickels, to hold down the defense and sluggers like sophomore Bella Loya to make consistent contact with the ball.

Sickels leads the team in ERA, strikeouts and wins as a freshman and is predicted to take the mound against Oklahoma.

Loya has been on a tear this season, and leading the team in batting average, hits, home runs and RBIs without having committed a single error on defense.

With players of all ages being solid contributors to the team, the Illini have formed a special bond with each other, which in turn gives them more confidence come game day.

“It’s actually fun working with them,” Perry said. “With the Midwest softball, we travel so much so it’s a grind. But they make the trips fun.”

The Illini will kick off their first game of the tournament against UCSB at 12:15 p.m. CDT.