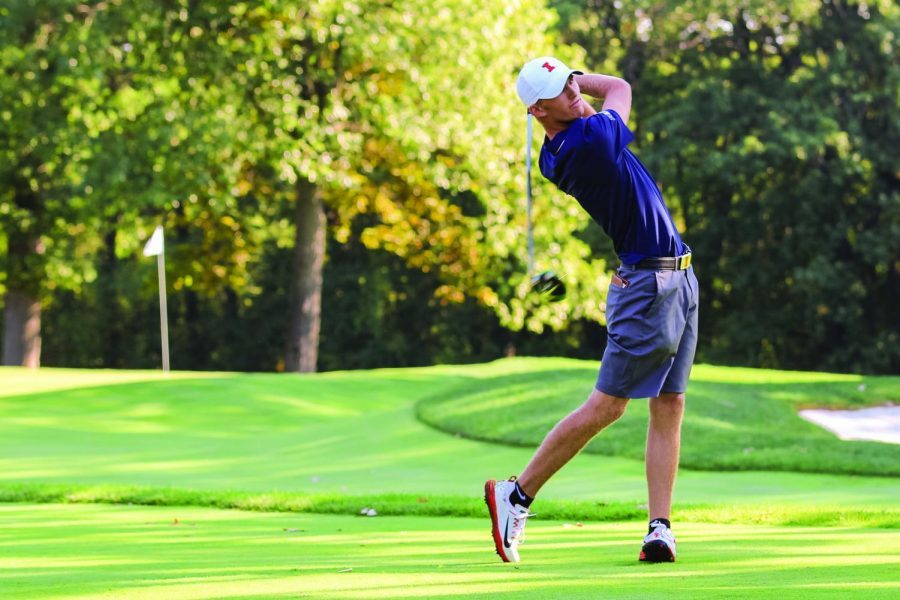 Michael Feagles follows the ball after a drive.

This is an improvement from the team’s last outing, where it placed ninth out of 15 at the Southern Highlands Collegiate in Las Vegas.

Because of strong starts from freshman Adrien Dumont de Chassart and junior Michael Feagles, the Illini shot a team score of two-under-par and started off with a No. 1 ranking after the opening round of play.

In the second round, the Illini maintained their first-place status by shooting par as a team. Dumont de Chassart shot four-under-par, asserting him in first place among the individual golfers.

Illinois lost its  lead in the third round when it ended the round five-over-par, causing it to finish second behind UNC.

Dumont de  Chassart shot a total of 207 after three rounds at nine-under-par, scoring six points better than the second place golfer. This  was the first first-place finish of his college career, but he’s always been a steady contributor to the team.

Looking at Dumont de Chassart, one of his first  noteworthy performances was when he went from seventh to second place in the third round at the MacDonald Cup. This helped the Illini seal their first team victory of the fall season during the weekend of Sept. 29 in New Haven, Connecticut.

Dumont de Chassart’s performance was accompanied by Feagles. They both put up top-10 performances in the tournament, and Feagles tied for sixth.

Feagles scored a 215 after three rounds at one-under-par, granting him a sixth-place finish. Both Dumont de Chassart and Feagles scored their worst rounds in the third, which had an overall effect on the team.

Four Illini golfers competed as individuals in the tournament, and three of them earned top-25 finishes. Junior  Giovanni Tadiotto tied for sixth shooting a 215, junior  Varun Chopra tied for 11th place when he scored an even par with 216  and sophomore Brendan O’Reilly shot four-over-par in three rounds to tie for 23rd.

Following this tournament, Illinois will compete in the 3M Augusta Invitational in Augusta, Georgia on April 6-7. Last year, the team took first place in the tournament and look to do the same this year, while simultaneously scoring their first win of the spring season.