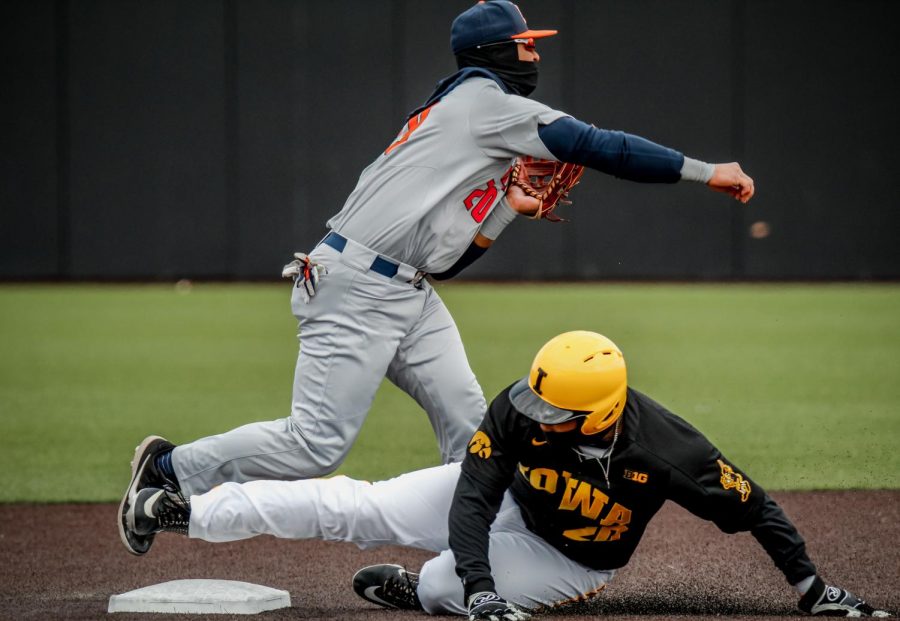 After facing the Iowa Hawkeyes Saturday afternoon in Iowa City, the Illini suffered their second loss of the weekend, making it their third straight loss.

Coming off a loss earlier in the week to Indiana State, Illinois looked to bounce back and start Big Ten conference play strong against Iowa.

The first game on Friday was a back-and-forth affair, one the Illini would eventually lose 8-4. As a team, Illinois didn’t have a bad day based off the box score. The team racked up eleven hits, with doubles from junior Ben Troike, redshirt freshman Kellen Sarver and seniors Jack Yalowitz and Grant Van Scoy.

The group effort is what allowed the Illini to carry a 4-3 lead into the seventh inning after rallying for the lead in the sixth, but it was the eighth inning that spelled the end for Illinois.

Having tied the game in the seventh off an RBI single, the Hawkeyes loaded the bases in the eighth and right-handed relief pitcher, and redshirt senior, Sean Leland couldn’t get out of the jam. He walked in two of Iowa’s four runs in the seventh inning and was responsible for five of Iowa’s eight runs in the game

“You have to tip your cap to Iowa. They did a really good job,”said head coach Dan Hartleb. “We did some things to shoot ourselves in the foot.”

The Illini tried to bounce back Saturday but were once again unsuccessful and lost the contest 2-1.

Right-handed ace Ty Weber started the game for the Illini. The junior came into the game with an ERA of 1.54 on over seven appearances including five starts. However, on Saturday Weber didn’t play to his previous stats, giving up two earned runs over just four innings.

However, the bullpen was able to stop the bleeding and keep the Illini in it. Iowa didn’t score again and didn’t record another hit over the last four frames, thanks to the combined effort of freshman southpaw Nathan Lavender and right-handed redshirt senior Quinten Sefcik.

It was the first Big Ten action for Lavender, who has only given up three runs since March 4. He struck out five of the six Iowa batters faced.

Despite the strong effort from the bullpen to keep the team in the game, the Illini offense couldn’t string together the necessary hits. They had six scattered throughout the day and no one recording a multi-hit day.

Tomorrow the Illini will attempt to salvage one win from the series in the final game of the weekend and break their losing streak. The current three-game losing streak is the longest of the season for Illinois. The single run scored ties its lowest of the season, previously recorded this past Tuesday against Indiana State and again March 4 versus Northeastern.

After Sunday’s contest, the team will return to Champaign and prepare to take on Coastal Carolina for a two-game series starting Tuesday. Coastal Carolina is currently 20-7-1 on the season.