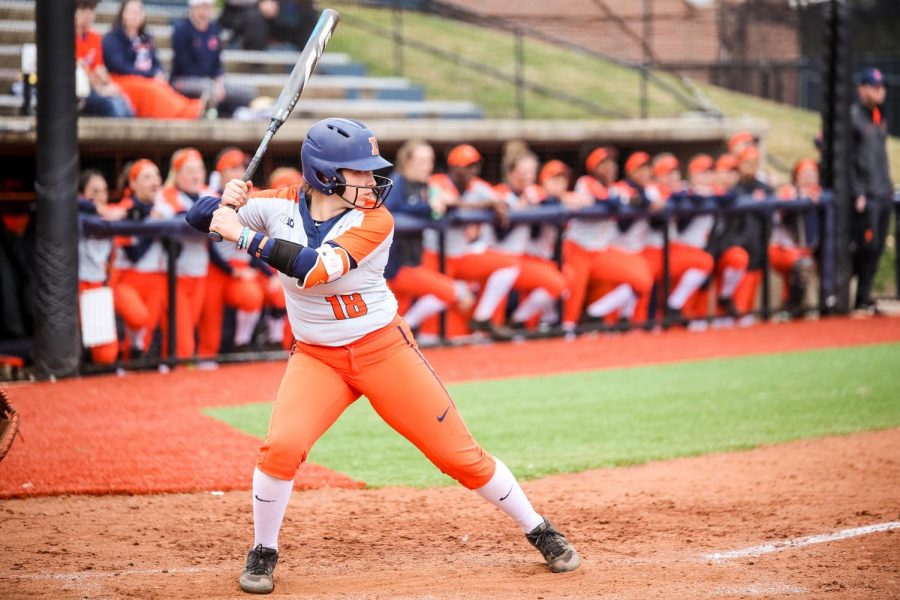 Bella Loya preparing for a pitch at Eichelberger Field on April 3.

Now midway through her sophomore season, Bella Loya has brought the Illini veteran-like success from all over the field. With a goal-oriented mindset, Loya is determined to make the most of her collegiate career.

“Last year, definitely one of the goals I set for myself was I wanted to make the rest of my career really challenging, and I want to up myself every year,” Loya said. “Having that challenge and having that goal from the get-go has really helped me.”

A standout freshman campaign from Loya helped the Illini to a 37-18, 13-8 record. The Mission Viejo native held the third-best batting average with .362 and led Illinois in home runs with 12.

Loya’s first-year performance caught the attention of softball outlets beyond Champaign. Not only was Loya named to the Big Ten All-Freshman team, but the catcher was also selected to the National Fastpitch Coaches Association All-Midwest Region second team.

The recognition from Big Ten or NFCA didn’t come as a surprise for head coach Tyra Perry and the Illini. Perry believes Loya’s freshman year showed a lot about her on and off the field.

“As a freshman, she was always having fun,” Perry said. “I’m a big fan of Bella Loya. She is amazing.”

While Loya’s freshman season could be a peak for some players, the Illini knew her potential was greater. Heading into her sophomore season, Loya’s main goal was just to make this season even better.

The sophomore has not lost sight of that goal. Loya has continued to improve throughout the season, currently leading the Illini with a .410 batting average, 48 hits, 38 RBI’s and 11 home runs.

“This year she’s really comfortable, and she’s growing every day,” Perry said. “She’s confident at the plate, and it’s not often you see a sophomore on a team of seniors in the four spot, so that tells you a lot about her.”

Loya has adjusted well to batting high up in the lineup, but the sophomore has also been adjusting to her defensive role as a starting catcher.

As a freshman, Loya believed she would find her role on the team as a catcher, her natural position. However, when Perry needed her to play first base and third base as well, Loya rose to the challenge and dominated wherever she played.

“Her freshman year she was supposed to catch, and she caught a good bit, but she also played first, third or she was a (designated player),” Perry said.  “A lot of freshmen couldn’t handle something like that, but she flourished and was amazing.”

Loya was happy to get playing time and be a prominent player as a freshman, but she was excited to start being a consistent force behind the plate.

“It definitely feels nice being somewhere where I’m completely comfortable,” Loya said. “Last year I remember just thinking, ‘Let’s just have fun (and not) think too much about it!’”

Loya’s attitude is a reflection of the team as a whole. The focus of the Illini will always be having high energy and the right attitude, and Loya had no problem fitting into that mindset.

Senior catcher Stephanie Abello says Loya’s willingness to learn and ability to be coached will only continue to help her thrive at Illinois.

“She has everything you need in a player,” Abello said. “She has the will, the talent (and) the presence at the plate and behind the plate. She’s got it all herself, and she’s going to go a long way with what she has.”

While Abello believed Loya didn’t need much help from her, Loya said the upperclassmen have been a major key to creating a successful environment.

“I was shown great leadership starting from last year,” Loya said. “Our upperclassmen are awesome. They’re mature. They tell it how it is, not hurting feelings. They’re holding us all accountable, and that’s huge in a team.”