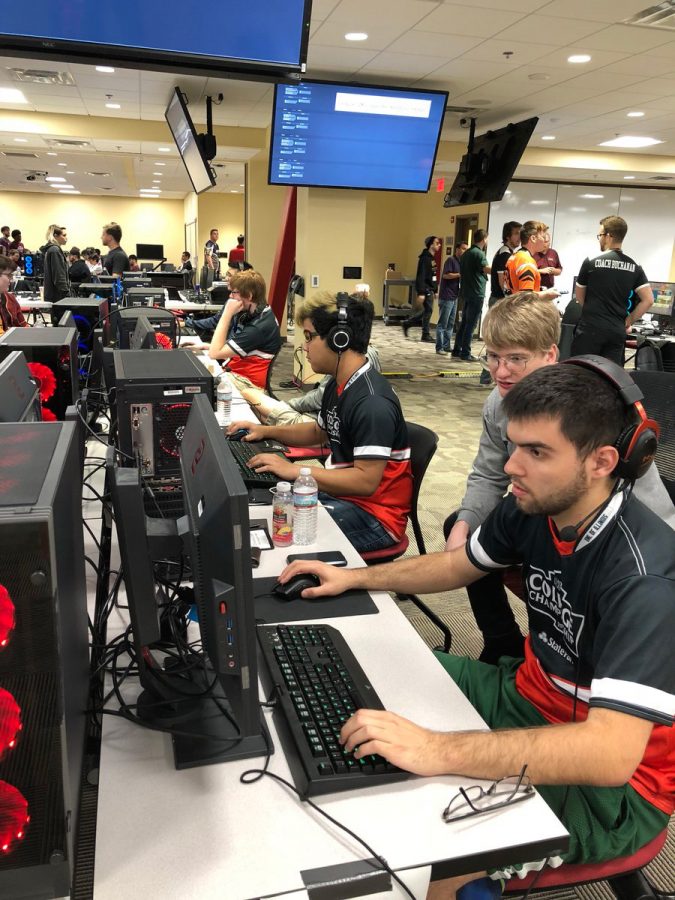 The Illini League of Legends team competes at Huefest at Harrisburg University on Sept. 21. The team won the Big Ten Championships and will compete at the College Championship on June 7.

In a best-of-five series in the Big Ten Tournament Championship, the Illinois League of Legends team was matched up against Michigan State in a 2-2 tie.

Illinois and Michigan State were the only two teams in the nation with a perfect 7-0 regular season on the line. On top of that, the winner would qualify for the College Championship. After a tense win-or-go-home match, Illinois punched their ticket to the College Championship tournament on June 7. In a recent ESPN coaches poll, Illinois was ranked fifth in the nation as a team.

Even after such a monumental series of events, the team hasn’t received much attention.Even though League of Legends has just 120 million users overall according to [lol-smurfs.com]  and has been known as the most popular PC game in the world for quite some time, the team is wondering why they don’t get the same attention as their Illini athletic counterparts

For the rest of the team, it’s more than just a game. Similar to traditional collegiate athletes, the members of the League of Legends team began playing as a way to bond with their friends and get away from the stresses of life but later realized they have a special talent for the game.

The game itself has two teams of five players in which character, known as champions are selected before the game starts.

Once the match begins, players go to their designated lanes on the map. There’s a top lane  located at the top of the map where usually one player from each team takes on, the mid lane located in the middle of the map with one player from each side facing off and a bottom lane where two players from each side battle in the bottom area of the map. The Jungler roams the area between lanes known as the jungle, assisting the different lanes and killing artificial monsters, which grant them skill boosts and gold.

Each lane has three turrets that need to be destroyed to advance into the enemy base. Once there, the team must destroy at least — one of the three inhibitors located behind the third turret from the top — to damage two final turrets protecting the nexus. The object of the game is to destroy the enemy team’s nexus, which is right in front of their spawn point.

Each lane spawns waves of virtual minions worth a small amount of gold when killed. A player can get a much larger quantity of gold by killing an enemy player and even more if the enemy player was on a kill-streak. The gold collected can be used to buy items to enhance each player’s abilities such as health and damage.

However, the game isn’t played as a first-person shooter where a player goes straight after the enemy and respawns immediately after dying. After dying, the player must wait a certain amount of time before they respawn based on the time elapsed in the game and how well that player is doing. Dying several times completely shifts the balance of power in favor of the opposing team, making a comeback significantly more difficult. Because of this, the game must be played in a strategic fashion, where picking the right battle to fight is imperative to success.

The main Illinois League of Legends team is comprised of six players and three members on its staff: a head coach, a strategic coach and a manager.

The head coach, Peter “Gino” Shyu, a recent Illinois mechanical engineering graduate, acts as any traditional head coach would: overseeing the other members of staff, offering advice to players and helping organize administrative issues. The strategic coach, Ian “Ido” McCormick, provides feedback to players and makes note of any adjustments the team can make to improve. The manager, Armando “Chivas” Gomez, is in charge of scheduling events and aiding the head coach.

Due to the high skill level required to be successful, the team holds tryouts for each individual lane and selects the best players out of the bunch. The first team, or the Premier team, is the most formidable group for Illinois, while the second team is called Academy. Once the team is set, the players practice two to three times a week and play during their free time to maintain peak form.

Despite its success, the team faces its fair share of adversity.

Illinois isn’t an official member of the National Association of Collegiate Esports, which is the national governing body of esports in the country. Other teams like Oklahoma and Missouri are a part of it and experience the benefits of being part of a large community of esports clubs.

The players play remotely from their own computers, communicating via Discord voice chat, risking connectivity issues that may arise; yet, they keep winning.

To understand how talented this team is, it’s important to understand the ranking system of League of Legends.

Once a player reaches level 30, they’re eligible to play ranked games. Prior to that, they can play ranked games, but players must play 10 games to be placed in a certain rank and division.

There are nine tiers of ranks: Iron, Bronze, Silver, Gold, Platinum, Diamond, Master, grandmaster and challenger. Each tier from Iron to Diamond have four divisions, four being the worst and one being the best.

Ranked games are far more intense than normal ones because every win and loss counts. If a player wins a game, they gain League Points, better known as LP. If a player loses a game, they lose LP. In order to move up the ranks, a player must reach 100 LP to move onto the next division or tier.

Once they reach 100 LP, the player must play through a series of games called the promotion series. If they win that, they can move onto the next division or tier, but if they lose, LP is deducted.

After losing too many games, a player can find themselves demoted from their rank. Ranks beyond Diamond don’t have divisions and rely solely on LP.

Most players never make it past the Gold ranking and getting past Diamond puts a player in elite territory. The lowest rank on the Illinois League of Legends team is a Diamond Division Three. A few players on the team, like Joshua “Xeno” Kim and Charles “Topopotamus” Uram, were at one point ranked in the challenger tier, which is the highest tier in the game, putting them in the .03% of players.

“Everyone on the team has at least reached master. We’re very solid all around,” said Naputtr “InwProjectONE” Chiaravanond, Jungler for the team.

Although interest in esports have been continually rising every year, there’s still a long way to go before becoming household names on college campuses across the country.

“From an outside perspective, it’s just people playing video games for fun, something you do casually and it’s something that a lot of parents and the older generation dislike. So because of all that stigma, it’ll be a lot harder to transition over and make esports more of a cultural norm,” Kim said.

It might take a while before esports gets their long-awaited recognition, but when it does, Illinois will be a premier team to watch.