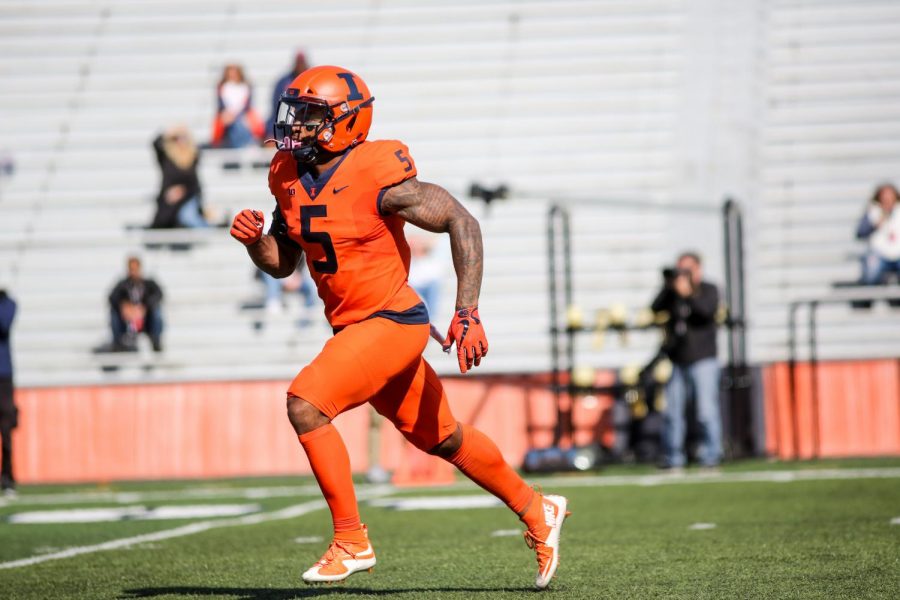 Milo Eifler dashes down the field at Memorial Stadium during the Spring football game on Saturday. The players worked hard to set the scene for the upcoming summer and fall practices.

There may still be about four-and-a-half months before Illinois football’s season opener against Akron, but Illinois put on its first spring game since 2015 on Saturday afternoon at Memorial Stadium.

Though there will likely be many changes to the Illini’s lineup, and since the class of 2023 is still yet to arrive, there were some things those watching the action could take away.

Lovie Smith’s defense generally had its way against Rod Smith’s offense, which struggled to string passes together and give its quarterbacks time in the backfield.

During the second half, which was played with a running clock, Jakari Norwood burst through the line untouched, breaking out to score a 52-yard touchdown that gave Team Butkus a 24-10 lead.

Norwood was one player who admittedly stood out to the staff in Saturday’s action.

The Illini have known of Norwood’s speed long before he got on campus, hearing of it when he signed, but they got to see its dangerous capabilities live.

“(Norwood) has done that throughout the spring also,” Lovie Smith said. “Excellent speed; he’s been able to show that. Of course, he showed that out there today. For the young players, that’s what you’re looking for.”

Another Illini who shined during the scrimmage was re-converted receiver Kendall Smith, who just moved back to the offense after being moved into the secondary as a sophomore.

Kendall dropped a few balls, like each of the Illini’s other receivers, but he emerged quickly as a frequent target for the quarterbacks.

He caught several passes, moving the chains — or getting close to it — with each reception and providing a bit of a consistent option for a group of wideouts that is largely untested and unproved beyond leading receiver Ricky Smalling.

By looking comfortable and being able to get open, the Bolingbrook, Illinois, native has put himself in contention for a significant role.

“You get to the spring game and notice a few guys,” Lovie said. “Kendall was a wideout (and) then we moved him to the defensive side of the ball. Then we asked him for the team to move back over to the offensive side. He hasn’t had those types of plays in the spring so far, but today I noticed him. That’s what you want to do:  Make the coaching staff take notice, and we took notice of what he did today.”

Like with any scrimmage, avoiding injuries is always a concern, and Illinois didn’t come out unscathed.

Sophomore defensive tackle Calvin Avery looked to suffer a potentially serious knee injury, needing to be carted off the field and into the locker room.

“Again, you don’t want any injuries. Calvin Avery went down,” Lovie said. “We don’t know how serious it is. Hopefully (it’s) not that serious, and we’ll get him back out there.”

Though Illinois actually has some depth along the defensive line — maybe the most in the Lovie Smith era — a healthy Avery was sure to factor into the rotation.

Even without Avery, though, the defense caused a lot of disruption.

Illinois has to fill the shoes of departed middle linebacker Del’Shawn Phillips, and both Dele Harding and Milo Eifler had a chance to showcase their abilities under Lovie’s watchful eye.

Harding exploded on the day, breaking through the line early for several would-be sacks in a real game.

The 6-foot-1-inch, 230-pound senior impressed his coach, who lauded his performance in the media scrum after the scrimmage.

“He’s definitely moved into that leadership role; one of the leaders on our team, not just the defense,” Lovie said. “Dele’s a smart guy; we ask our linebackers to do a lot. Once we get Jake Hansen back, we feel good about the depth.”

Perhaps the competition that will draw the most attention won’t really get under way until training camp.

Top returning quarterback M.J. Rivers shared first-team snaps with Matt Robinson on Saturday, and neither gunslinger was really able to establish a rhythm, as each made some mistakes.

Lovie said he was generally pleased with the play of his quarterbacks, though he also acknowledged that incoming recruit Isaiah Williams will be given a shot to compete for the starting job.

Williams was on-hand at Memorial Stadium, along with other Illini recruits Shammond Cooper, Reggie Love and Marquez Beason, among others. Williams is well aware he’ll be entering the picture late, but he feels he brings a lot to the table.

“First thing is my elusiveness, but not only that. I can throw the ball and read defenses,” Williams said. “Mentally, just my love for the game and the willingness to keep getting better (are my strengths).”

This spring, the Trinity Catholic senior is focused on staying in shape and continuing to mold his arm ahead of his arrival in Champaign this summer.

“Right now, I’m just doing a lot of conditioning,” Williams said. “Track practice, I’m running every single day. Besides that, I only lift about two days a week — not too much lifting. Just conditioning, and I throw about three to four days a week.”

Another spectator, Marcellus Rivers Sr., had his eyes locked on M.J. Rivers under center for most of the day. The former NFL pro is pleased with how his son has performed at Illinois since coming into the program last summer.

He knows Williams is a major threat to take his son’s starting job, and he believes he’s helped instill the right mindset in Rivers.

“Something I’ve always told M.J. is that you always prepare like it’s your first season,” Marcellus said. “No matter if you are the starter, no matter if you’re a rookie, you always prepare like you’re going to be the starter and like it’s your first time ever stepping out there. You’ve got to keep that same drive and that same hunger.”

So far, he thinks Rivers is doing what it will take to be Rod Smith’s No. 1 guy under center in the fall.

“That’s kind of what he’s kept to, at the same time having the confidence that he knows everything and trusts the offense and everybody out there,” Marcellus said. “He knows he can get the job done.”

Regardless of who emerges as the Illini’s top quarterback, Williams and the incoming class will bring significant, program-impacting talent to Champaign this summer.

Williams weighed in on the program’s recent recruiting successes, which includes the commitments of his Trinity teammate Reggie Love.

Illinois currently has the No. 39 recruiting class for 2019 and the No. 9 class in the Big Ten.

“I kind of entered the room when it was dark,” Williams said. “But it’s easy to enter the room now, so now we’re going to keep getting more and more guys. Everybody brings their own personal thing, but not only that. They’re going to bring other guys. It’s going to be easier for more guys to come.”