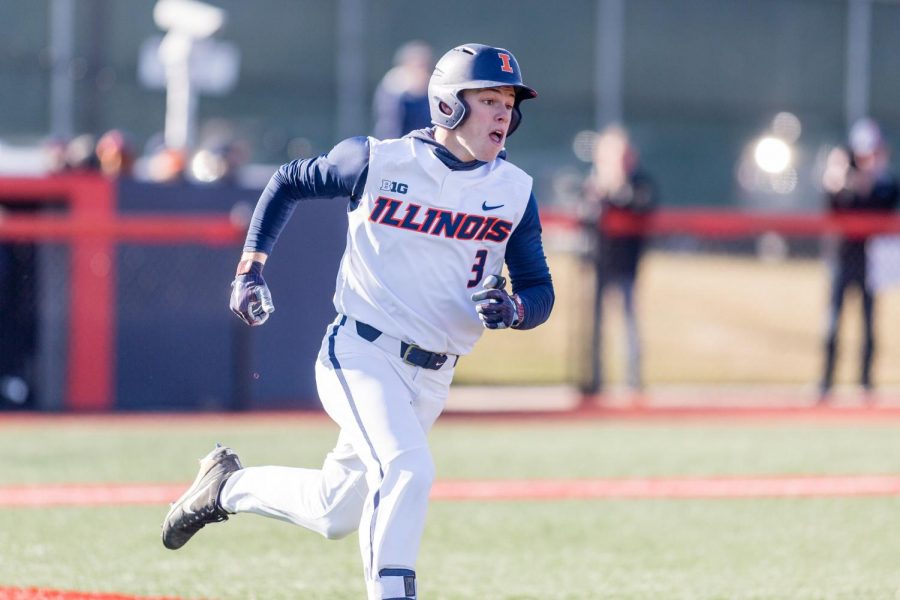 Illinois outfielder Jack Yalowitz runs to first. He played against Milwaukee at the Illinois Field on March 14.

After breaking out in 2017 and batting .335 with 12 home runs and 44 RBI’s on his way to earning All-Big Ten first-team honors, hopes were high for Illinois outfielder Jack Yalowitz heading into his junior season.

However, 2018 proved to be a trying time for the Chicago native. Yalowitz batted just .216, hit four home runs and drove in 30 runs. To make matters worse, he also struck out a career-high 42 times and drew a career-low 19 walks.

“Last season was difficult,” Yalowitz said. “It was very inconsistent; I was not swinging at good pitches, (and) I was putting a lot of pressure on myself. I wasn’t doing what it takes to help the team win games.”

Heading into his final season in Champaign, Yalowitz knew he had to make changes if he was going to redeem himself.

While some players change little parts of their stance when struggling at the plate, the root of Yalowitz’s problems stemmed from chasing too many bad pitches, as evidenced by the career high in punch-outs.

“I tried to simplify my mechanics (and) tried to put myself in a good position to hit every time,” Yalowitz said. “I’ve also worked on a lot of stuff mentally. (I’m) just trying to zone in on pitches that I know I can hit and not try to do too much.”

So far in 2019, the senior’s improved approach is already applying dividends.

Yalowitz is batting .310 and is on pace to draw a career high in walks, a tangible sign he’s seeing the ball better than he did in 2018.

“You learn things when you struggle,” said head coach Dan Hartleb. “He learned, he worked hard, he improved, and he’s having a good year for us.”

This spring has undoubtedly been a bounce-back campaign for Yalowitz, but his struggles last season still had their effects on his mentality.

Yalowitz’s team-first mindset is abundantly clear to anyone who speaks to him, and other Illinois players haven’t only taken notice, but they’ve also tried to replicate some of those same habits.

“I can’t say enough about how (Yalowitz) has been playing,” said freshman catcher Jacob Campbell. “He’s a tremendous leader, and honestly, every time he goes about his business, I look for little things that he does that I could implement into my game.”

Although he’s on the verge of graduating, Yalowitz makes a point of making new players’ transition into the Illinois program as seamless as possible.

Yalowitz feels close to Campbell in general since he hosted the freshman catcher on his official visit, making their relationship especially strong, but he wants every young player on the team to feel comfortable coming to him with anything they want to talk about.

“With the new guys, I always try to help them out when they need it. If they ever have questions, I want to be as friendly and easy to talk to as possible,” Yalowitz said.

Regardless of how things were going at the plate, Yalowitz always had the respect of his teammates, but as of late, the senior’s state line proves his struggles last season are a thing of the past, and he has earned back their trust in his abilities at the plate.