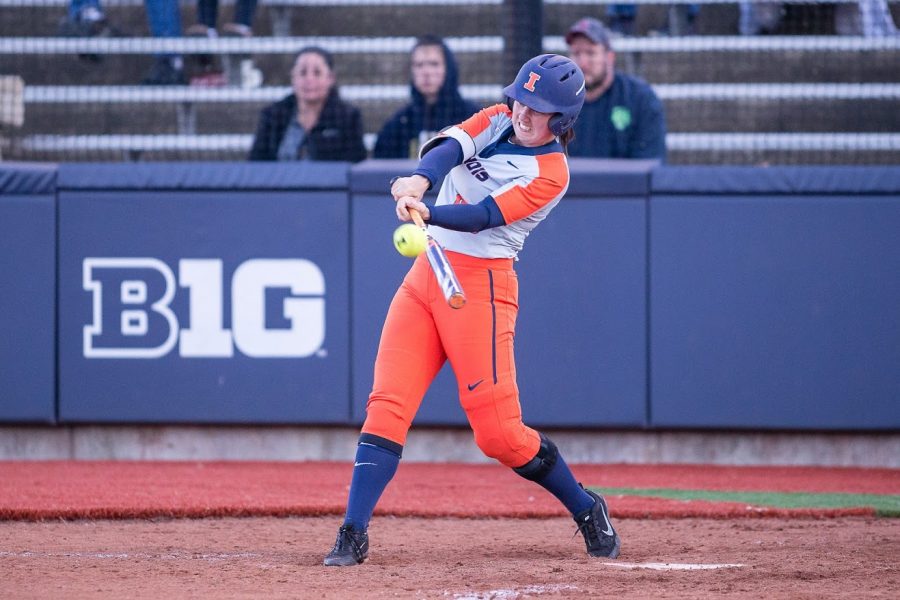 Illinois pinch hitter Veronica Ruelius (00) hits the ball during the game against Eastern Illinois at Eichelberger Field on Tuesday, March 26, 2019. The Illini won 8-7 in 8 innings.

Last weekend Illinois softball took its second Big Ten series at Iowa but fell in the last game of the outing. However, the Illini wasted no time getting back to the win column with a 13-4 run-rule win over SIUE at home on Wednesday.
“I think we’ve had good energy all week, especially coming off the loss to Iowa,” head coach Tyra Perry said. “That was a tough loss because we led most of the game, we had control most of the game. It’s always interesting to see the team come back once we start practicing again and we’ve had good energy.”
Using a windy day to their advantage, the Illini knocked four home runs on 11 hits with six different Illini recording at least one hit. Senior Kiana Sherlund led the way for the Illini going 3-for-4 at the plate with three runs.
Redshirt senior Annie Fleming set the tone from the get-go with a leadoff homerun to give Illinois an early 1-0 advantage in the first inning.
“We didn’t finish our weekend on Saturday like we wanted to so getting back and getting that first big hit let everybody take that deep breath that we needed,” Fleming said. “I think it was so important and set the stage for everyone else in our lineup with big bats as well.”
Fleming set the stage well, as the Illini went on to grab three more runs in the first inning. A double from Sherlund, a walk, and a hit-by-pitch loaded up the bases for senior Veronica Ruelius who drove Sherlund home on a RBI single. Senior Stephanie Abello and sophomore Katie Wingerter had RBI’s of their own to give Illinois a 4-0 lead.
After a quiet first inning, the Cougars used a leadoff home run and an RBI single in the second inning to cut Illinois’ lead to 4-2. However, Illinois quickly regained a comfortable lead, scoring six runs in the second inning.
Back-to-back singles from Fleming and Sherlund set up the first run with a RBI single from Thomas. Sophomore Bella Loya followed up with a sacrifice fly to score Sherlund.
A single from Ruelius and a sac fly from freshman Kailee Powell scored Thomas. After Abello hit a single to give the Illini two base runners, Wingerter hit her fifth homerun of the season to put the Illini up 10-2 after just two innings of play.
The Illini scored the last three runs of the day in the fourth inning off a leadoff solo homer from Abello and a two-run homer from Sherlund.
While the Cougars hit a pair solo home runs in the third and fourth inning, senior Taylor Edwards and the Illini defense did not allow the comeback to occur.
Edwards earned her third win of the season, pitching just over three innings and allowing just one unearned run on seven hits. Senior Emily Oestreich pitched over an inning in relief giving up just one hit.
The Illini defense committed just one error through five innings; and Fleming attributes the Illini’s solid defense to a focus on mentality.
“We’ve worked really, really hard in practice,” Fleming said. “Our coaches have been pushing us, we’ve watched a lot of film, we’ve just been putting in a lot of work not only physically but mentally.”
“Your confidence can get kind of down when you’re not playing the best defense, but we just come out every day and say we’re the best defense in the country.”
Illinois will continue their home stretch with a Big Ten weekend series against No. 18 Michigan starting Friday evening. Eichelberger Field will also host many alumni this weekend to celebrate the 20th season of Illinois softball.
“We’re really excited, it’s a big weekend for us,” Fleming said. “Not only do we play Michigan, but we have a lot of alumni coming back for our 20th-year celebration, so we’re really excited. It’s kind of time to show everybody else who Illinois is.”
@gabby_h11
[email protected]
Leave a Comment
MOST READ
1