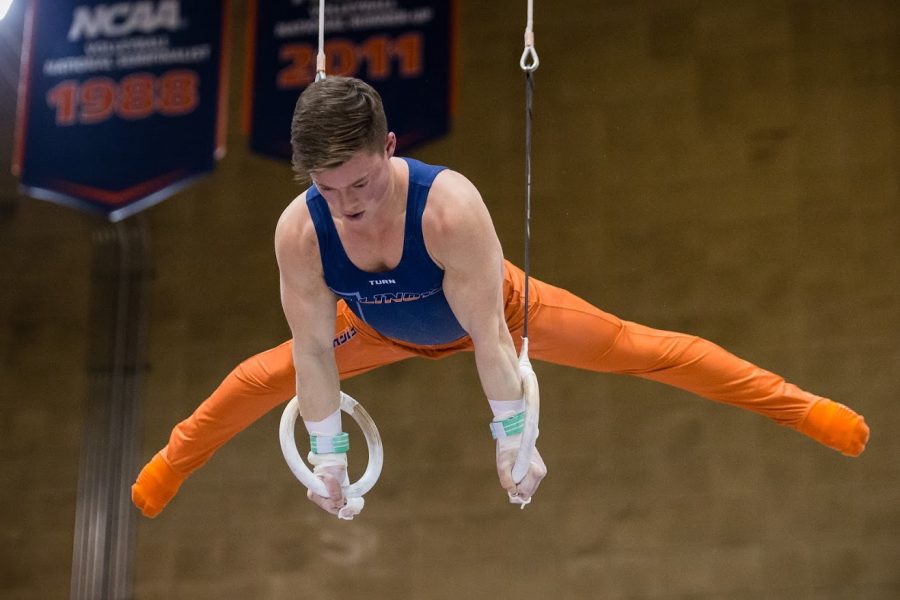 Senior Alex Diab performs on the still rings during the meet against Iowa was at Huff Hall on Jan. 26. He collected his second straight national title in the event on Saturday.

The Illinois men’s gymnastics team placed fifth at the NCAA championship over the weekend.

The Stanford Cardinals pulled off the big upset by defeating the four-time-champion Oklahoma Sooners by less than a point and the Illini by nearly ten points. Illinois put up a total score of just 405.358, compared to last year’s third-place finish of 411.689.

“Sometimes the event is a little more nerve-wracking because you put your heart and soul and everything you could into a year of your life,” Spring said.

Saturday night’s final started the same way for the Illini. The team once again started slowly on the parallel bars with 63.564 points as junior Sebastian Quiana and senior Johnny Jacobson struggled. Unlike Friday night, Illinois did not weather the storm well. The team struggled with its high-bar routine as its score was 64.099, and Quiana continued to slump, falling twice on his routine.

After a very rough start, the Illini responded with one of their best floor routines. Illinois scored a 71.199 with Jacobson and senior Alex Diab scoring a 14.433, and Quiana scoring a 14.633.

Unfortunately for the Illini, the struggles continued after the floor routine, and they were never able to get back on track. The struggles were evident for junior Michael Paradise. The junior led the team in the past with his consistent approach on the pommel horse, but when it looked like he would win the events national title, Paradise put up his season low of 13.9 and came in fifth place.

The lone bright spot of the event was Diab’s performance on the still rings. Diab has already claimed four Big Ten titles on the still rings and a national championship on rings last year. He still maintains national-champion status after his impressive 14.733.

“I set high goals for myself; I just grinded through every day keeping those goals in mind, and it paid off,” Diab said.

Diab’s event title wasn’t the only accolade the Illini came home with. Five Illini were named All-Americans, Diab on floor and still rings, Jacobson and Quiana on floor, Carter on high bar, and Paradise on pommel horse.

This meet marks the end of the season for Illinois, and although the team had some struggles in its final meet, it had the opportunity to compete in the NCAA finals at home in the State Farm Center.