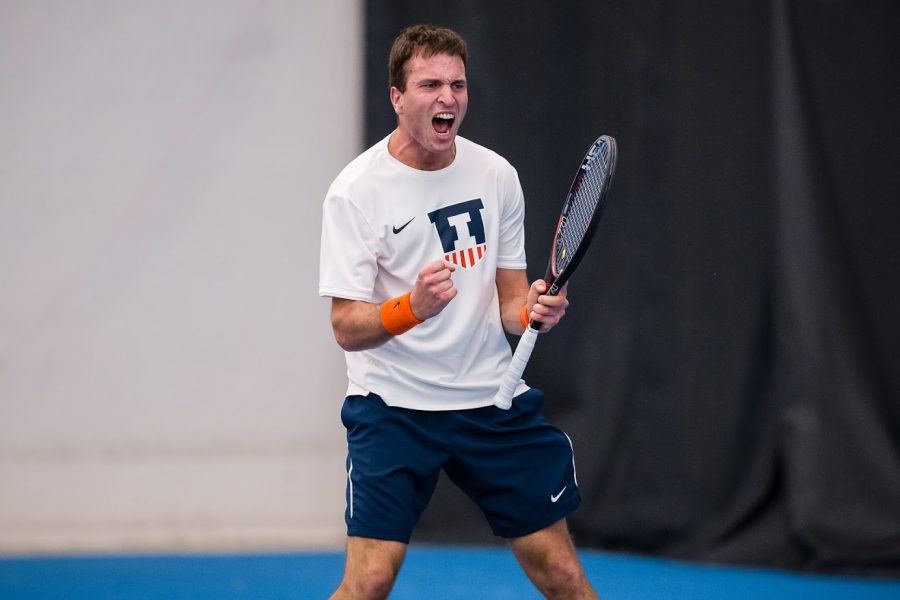 The No. 15 Illinois men’s tennis team won its first two matches of the Big Ten tournament to advance to the finals.

The Illini started the tournament off against the Boilermakers, the tournament’s No. 10 seed. After an easy 4-0 win in the regular season, Illinois struggled against Purdue on Friday.

“We played with a lack of discipline and focus,” said head coach Brad Dancer. “We really put ourselves in a tough spot.”

In doubles play, the Boilermakers had their way with the Illini. Redshirt sophomore Gui Gomes and junior Vuk Budic lost to Maksymilian Raupuk and Mateo Julio, and the duo of freshman Keenan Mayo and sophomore Fletcher Scott lost to Santiago Galan and Franz Luna, granting Purdue an early point.

The Illini turned it around in singles play, winning four of their five matches to claim the victory over the Boilermakers. Junior Zeke Clark and sophomore Alex Brown helped guide the Illini in their victory.

On Saturday, Illinois faced Penn State for a chance in the Big Ten final. Earlier in the year, the Nittany Lions gave the Illini a scare when Illinois barely came out with a 4-3 win.

In the Big Ten tournament, the Illini won in a more comfortable fashion. The struggles in doubles play continued for the Illini as they lost two of their three matches. The only pair that won was two of the Illini’s best players, Kovacevic and Brown.

In singles, the Illini won four of their five matches all in straight sets. Kovacevic, Clark and freshman Siphosothando Montsi all won in straight sets, while Brown dealt with more back-and-forth competition. Brown’s first set ended in an easy victory, 6-2, but his second set was close as he went into a tiebreaker. Brown ended up pulling it off, and the Illini won the match without too much stress.

“The guys came out focused and really clear on what they were doing,”  Dancer said.

The Illini’s next match will come in the finals against the No. 1-seeded Ohio State Buckeyes. Earlier this year, the Illini lost to the Buckeyes in what turned out to be their lone loss in Big Ten play.

The Buckeyes won doubles play to garner a point, and in singles play they took three of the five matches and claimed the win. The Illini’s top singles player, Kovacevic lost one of his two regular season singles matches against Ohio State when he faced J.J. Wolf, the number one singles player in the country at the time.  Even though he lost in straight set, Kovacevic made it to a tiebreaker in both sets and was close throughout the match.

For the Illini to win, Dancer believes they must stay engaged.

Illinois will face Ohio State in the Big Ten tournament finals and look to claim its first Big Ten conference title since 2015.