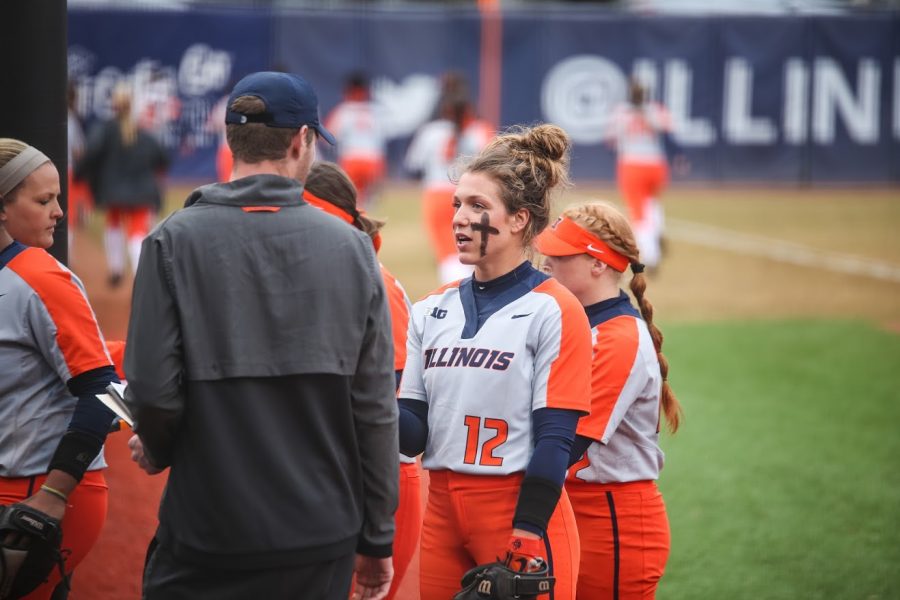 Taylor Edwards speaks to one of the Softball coaches at Eichelberger Field on April 3. Illinois defeated Illinois State 2-1. This game marked the end of a seven-game losing streak for the Illini.

The Illinois softball team claimed a win on its home turf on Tuesday, beating DePaul 7-0. This week’s matchup marked the team’s first return home to Urbana after being swept by Michigan during a home series in April.

The Illini’s win this weekend breaks a seven-game losing streak, as the team has struggled through conference play in April. All seven of the matchups that made up Illinois’ losing streak were against conference teams: Michigan,Northwestern and Ohio State. In the three-game series against Ohio State last weekend, Illinois only scored six runs the entire series, a scoring record the team surpassed against DePaul on Tuesday with    seven runs in one game.

Redshirt senior third baseman Annie Fleming led Illinois in runs, scoring twice against DePaul. Redshirt senior infielder Carly Thomas kept pace with Fleming at the plate, matching her classmate’s two hits while also picking up two RBIs. Sophomore and Illinois native Shelby Stauffenberg led the Illini in RBIs, however, earning three while serving as pinch hitter. Fleming, Thomas and Stauffenberg all punched their tickets for a round-tripper, with all three hitting home runs during the game.

Sophomore catcher Bella Loya was also among those who scored for the Illini, but the leading slugger didn’t manage a single hit in the game. In total, Illinois scored seven runs on nine hits, earning three runs off DePaul’s Natalie Halvorson.

On the mound, the day belonged to senior pitcher Taylor Edwards. Edwards has seen action throughout the season, relieving fellow pitchers like freshman Sydney Sickels and senior Emily Oestreich, but Tuesday’s effort and win were solely attributable to Edwards, who pitched all five innings before inclement weather brought the game to an end.

In her five innings on the mound, Edwards allowed only two hits, struck out five and walked two. The performance is notably different from Edwards’ start on Saturday on the road against Ohio State, where she allowed 10 hits and gave up seven earned runs, also in five innings.

Illinois will remain home at Eichelberger Field for its final conference series before the Big Ten Tournament in Bloomington, Indiana. Illinois will host Purdue from Friday to Sunday to close out the regular season. The upcoming series will give the Illini a chance to even out their lopsided conference record, which currently stands at 6-14, before tournament competition begins. It will prove to be a test for the Illini, who have not managed to maintain a winning streak longer than three games since February’s non-conference tournaments.