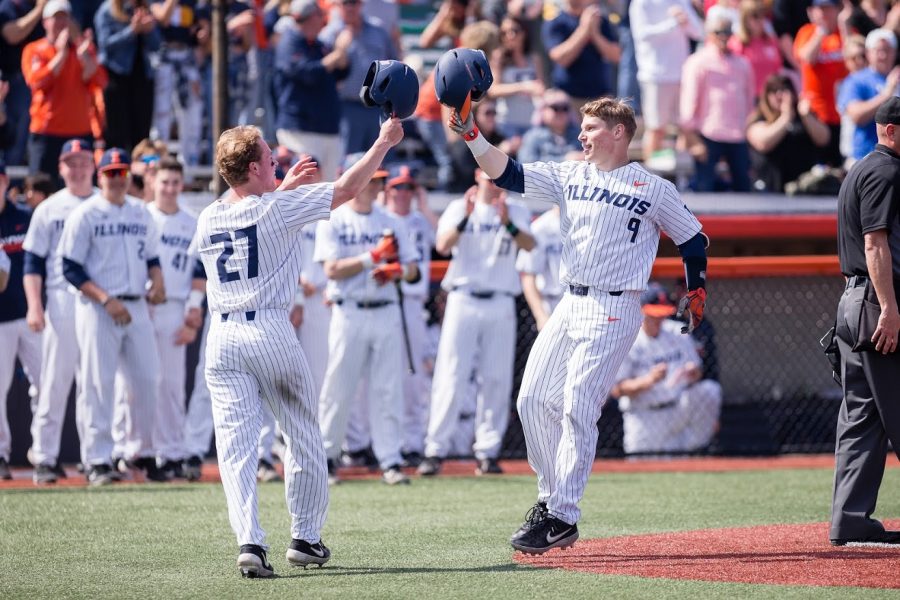 Catcher Jacob Campbell (right) celebrates with third baseman Grant Van Scoy (left) after hitting a homerun during game one of the doubleheader against Maryland at Illinois Field on April 6. The Illini won 5-1.

The Illinois baseball team collected its third straight conference series win as it took two of three games from Nebraska in Lincoln over the weekend.

The Illini got things going early on Friday and led 6-0 by the end of the third inning. The run support was plenty for redshirt senior starting pitcher Andy Fisher, who gave up just three hits and one run over seven innings of work, striking out eight on the way to an 8-1 Illinois victory.

“When (Fisher) was in the zone, he was basically unhittable,” said head coach Dan Hartleb per fightingillini.com. “He has done such a great job for us all year and continued that.”

Saturday’s contest started similarly to Friday’s, as Illinois jumped out to an early lead again. Already ahead 2-1 in the third, the Illini received a big boost from redshirt senior Zac Taylor, who homered to center, marking his seventh on the season.

With the game knotted at three in the ninth, Nebraska’s Joe Acker singled off of Illinois redshirt senior reliever Quinten Sefcik to bring home the walk off run for a 4-3 Husker victory.

“We beat ourselves,” Hartleb said in a statement on fightingillini.com. “Three of their runs came off two walks and a hit by pitch. Nebraska has been struggling at the plate lately and the only way they scored was by us giving it to them, then they took advantage of it. You have to give them credit for that.”

Senior Jack Yalowitz picked up a base hit in the loss after having two in Friday’s game, but some may not have realized it. Forced to wear the 22 jersey of Cyrillo Watson due to lost luggage, the senior was without any of his own equipment but did not let it affect his performance.

Back in his usual number three jersey for Sunday, Yalowtiz smacked a lined-shot that got out in a hurry for a two-run homer in his first at-bat.

The Huskers would fight back, however, and the game would be tied 4-4 heading into the ninth.

Fortunately for the Illini, redshirt freshman first baseman Kellen Sarver picked up his lone hit of the day, a two-run double, to give Illinois the 6-4 lead.

“That was a great at-bat,” Hartleb said.“ (Sarver) had a really, really good approach. He caught a mistake and drilled it. (It was an) unbelievable at-bat and a huge hit for him. Really proud of his composure.”

The bottom half of the inning was a nervy one for the Illini as the usually reliable junior closer Garrett Acton surrendered a run and dealt with runners on second and third with two outs before getting a groundout to finish off his 14th save.

After dropping 2 of 3 to Maryland at home three weeks ago, Illinois bounced back and is 8-4 since.

“It’s consistency,” Yalowitz said. “Consistency on the mound, throwing a lot strikes (and) getting guys out. Then in the box, putting good swings on balls, not letting pitchers on opposing teams get us out. We’ve done a pretty good job the last couple of weeks staying composed and having simple approaches on the mound and at the plate.”