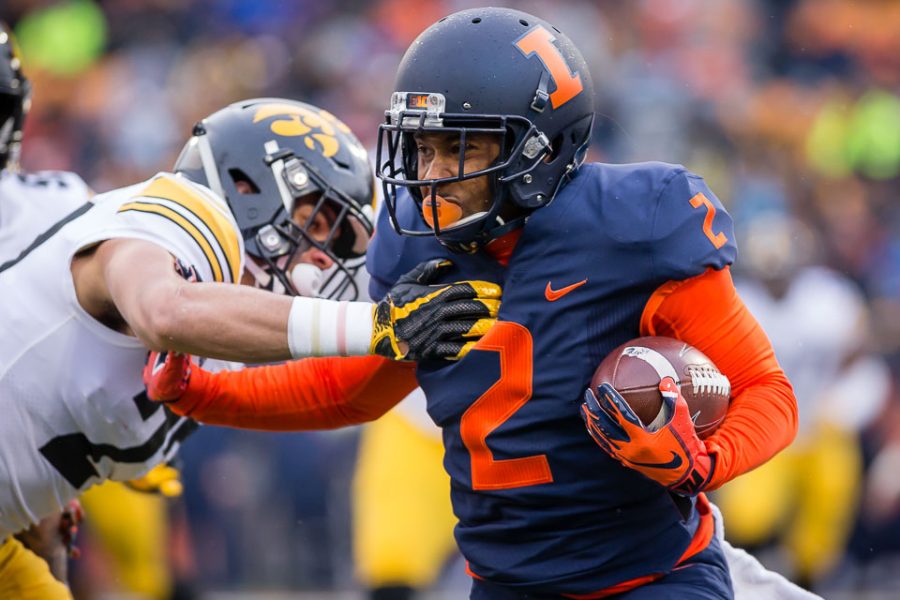 Illinois running back Reggie Corbin (2) stiff arms a defender during the game against Iowa at Memorial Stadium on Saturday, Nov. 17, 2018.

Although Illinois’ offense heads into the 2019 season without any past production from its quarterbacks, senior running back Reggie Corbin is coming off a breakthrough season and is expected to continue to build on his success from 2018.

Early on in camp, the tailback has not taken as many reps as the other backs in an effort to preserve his health for the season but still has goals he wants to achieve before the season.

“Getting everything better, running this offense even more,” Corbin said. “Getting a better volume with my quarterbacks and my lineman, just trying to make sure the rest of the team is doing well. Not focusing on myself at all, whatever the team needs from me.”

This offseason, Lovie Smith as placed a premium on giving offensive coordinator Rod Smith everything he needs to run the offense exactly the way he wants.

As a result, Corbin and the rest of the offensive unit are looking to Rod more than ever.

“Just gel, listen to coach Rod Smith, that’s all we really can do,” Corbin said. “Do whatever he tells us to do. Go as hard as we can, and let the chips fall where they may.”

It does not take many 1-on-1 reps to see the Illini offensive line is the strength of this year’s team. Not only does the unit make a habit of pancaking their defensive counterparts trying to get through, but they aren’t afraid to let the defense know about it either.

Corbin averaged 8.5 yards per carry and crossed the 1,000-yard plateau behind the Illinois line last season, and he is thankful to have a deep, talented unit.

“It’s beautiful, man. You got five guys like that, and then you got some guys that can sub in, and there’s no drop off,” Corbin said. “I’m blessed to have an offensive line like that willing to block for me (and) put their hand down in the dirt every single day and go hard.”

While there is no question Corbin will be entrenched in the Illini backfield, the quarterback who will play alongside him is still unknown.

Michigan graduate-transfer Brandon Peters and true freshman four-star recruit Isaiah Williams are in competition for the job. While Williams brings speed and dynamic play capability, Peters offers arm-strength and stability, and Corbin has noticed early on.

“(Peters is) mature. He’s a smart guy. I really like him as a person,” Corbin said. “He’s a little bit more quiet, but you can tell he’s coming out (of) his shell. You can see he only makes smart decisions. I’m happy to have him.”

Regardless of who wins the position, Illinois is still one of the youngest teams in college football. The Illini played more true freshman than any team in the country last season, and the roster is still unproven overall. As one of the team’s known commodities, Corbin wants to set an example for the rest of his teammates to follow.

“I look at myself as probably the leader of the team, at least one of the leaders,” Corbin said. “If somebody’s doing something wrong, it’s my fault.”

As camp rolls on, Illinois has many questions still left to answer, but Corbin’s value to the team is certainly not one.