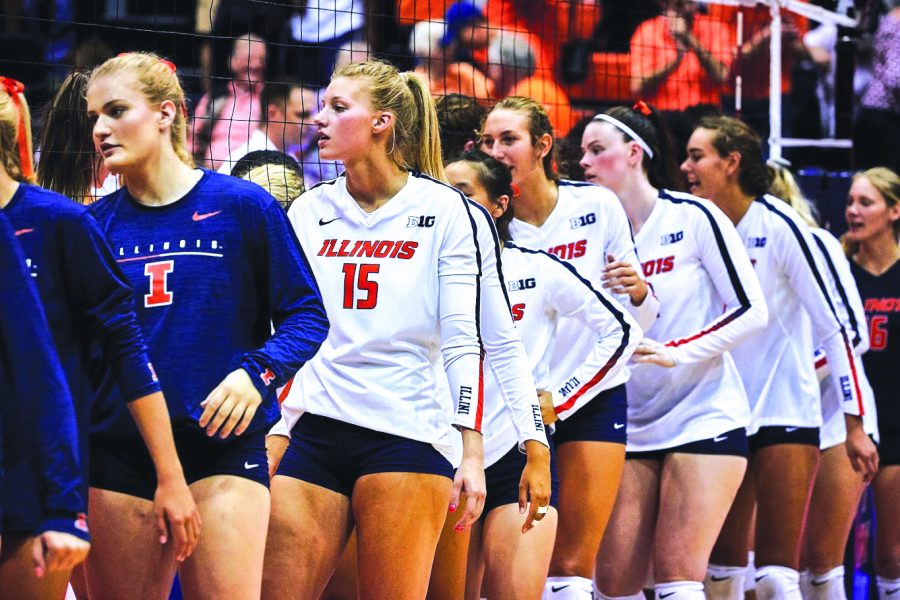 The Illini shake hands with Tennessee after their victory at Huff Hall on Sunday. The Illini won 3-2.

The Illinois volleyball team has been off to an exciting start coming off its final four appearances last season. This past weekend they won both of their matches against Tennessee in the fifth round, going from being down 2-0 and winning three straight in their first match, to being up 2-0 and losing the lead just to win it in the fifth in their second match.

Some familiar names showed up big in the first two matches for the Illini. Seniors Jacqueline Quade and Ashlyn Fleming had large contributions to the offense and defense, but new faces also contributed to the successful weekend. One new face specifically, freshman middle blocker Kennedy Collins, made a big impact in her first two matches for the Illini.

“(Her performance was) great, lots of improvement from the opening match until this one,” said head coach Chris Tamas. “Part of it was that we wanted to use her more. I didn’t think we hit her in the greatest of positions on Friday… She got a big swing at the end and a huge stuff against (Tennessee’s) best outside hitter. It’s all you can ask for in those big moments.”

Tamas was referencing Collins’ clutch play on Sunday against Tennessee, where she got a block late in the fifth and scored the match-winning kill to seal the Illini victory.

The multiple injuries that the Illini are facing have forced the players to step up, and this isn’t different for the freshmen.

While Collins may not have expected to be such an impact player right away, she was ready for the opportunity. The Zion, Illinois native was a four-year starter at her high school, Zion-Benton. In those four years, Collins was the four-time team MVP and was a three-time North Suburban Conference honoree.

“Being in the gym every day and going through those situations in practice,” said Collins on what makes her prepared for the big moment. “The competition level in practice is very high, so I kind of know what the situation feels like to be in that moment.”

Collins talked about how the team stays focused and keeps its composure. They have a team “scale” that goes from one to ten, and they always try to stay at a five. Not too high, and not too low.

Collins might have been prepared for her big moment, but it doesn’t mean there were no nerves that came with such a big role so early. Collins’ confidence coming into the season was low, but Collins knows the team always has her back. That helps her keep her confidence high.

Teammates and friends like Kyla Swanson have helped her confidence and performance on the court.

“Coming in not knowing a lot of girls, Kyla, and Ellie (Holzman) being my roommate, we created a great bond,” Collins said.”Coming into the first practice knowing someone, having a pepper partner, it helped me a lot.

“It was great (to start the game with Swanson), we were in our room last night practicing our celebrations together, and we got a block, so it was fun playing with her. I love her.”

Collins is continuing to shake off the nerves that come with many freshmen athletes but will continue to also grow from the support that her team offers.

It only gets harder for Collins and the Illini as they will be traveling a lot this next month. Their next match at home in front of a Huff Hall crowd won’t be until September 27. That match will start their conference play and it will be against Nebraska, the team who ended their championship hopes last season.

“(The team is) always supportive,” Collins said. “They always have something to tell me to fix, or if I am doing great, they’ll let me know. So just knowing that they’ll be there will help.”