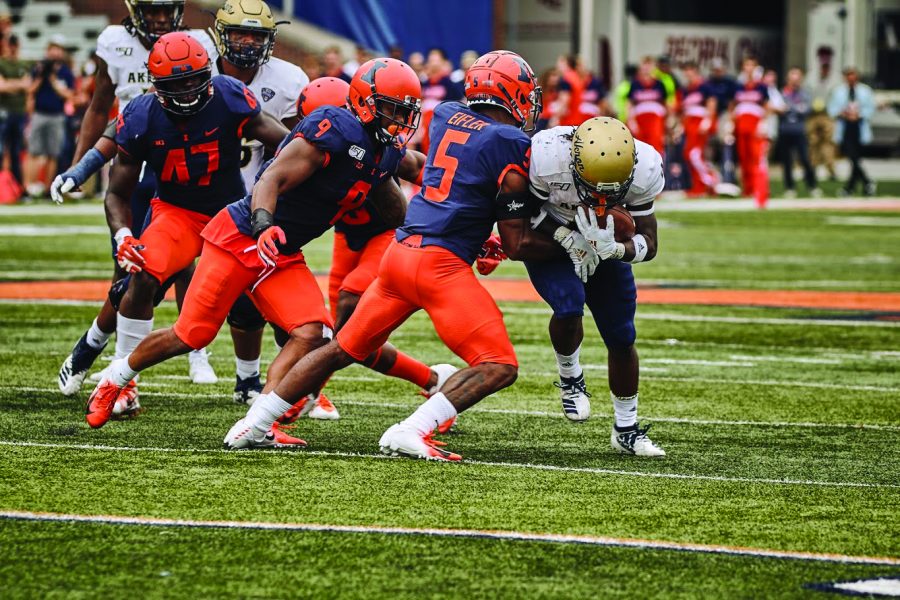 Though some may not be aware, Illinois linebacker Milo Eifler is one of the most successful players in the country that hasn’t played for Alabama, Clemson or Oklahoma.

At Washington, Eifler’s previous school, the Bay Area native was redshirted but was in and around the 2016 Husky team that started 12-1 and made an appearance in the College Football Playoff semifinal, losing 24-7 to Alabama in the Chick-Fil-A Peach Bowl. He was then a rotation player and appeared in every game during the Huskies’ 2017 season, in which they finished 10-3 and made an appearance in the PlayStation Fiesta Bowl, losing to Saquon Barkley and Penn State.

Eifler’s defenses at Washington were among the highest-rated in the country, which starkly contrasts to an Illinois unit that ranked among the worst in America in 2018 while he was sitting out. Now in the fold and available to play, the Illini’s new starting outside linebacker feels the only way the unit can improve is to put last season into the past.

“We don’t want to do anything we did last year, kinda don’t even think about last year,” Eifler said.

Sitting on the sidelines allowed Eifler to visually familiarize himself with the Big Ten, a conference with a different offensive profile than the Pac 12.

For a big, versatile linebacker who doesn’t shy away from hard hits, it’s evident  Eifler’s style of play fits the league.

“The biggest difference for me about the Big Ten is just the style of offenses we play,” Eifler said. “You know (in the) Pac 12 mostly everybody was (a) spread offense, trying to get guys (in) one-on-one situations (and) create space. We got a couple of those teams in the Big Ten but it’s mostly downhill, Wisconsin type (and) Iowa type offenses, that’s the biggest difference for me.”

Strong linebacker play was a critical piece of Lovie Smith’s vision to turn around the defense when he took over as the play caller this off-season.

The highlight of Eifler’s Saturday came in the third quarter with the Illini already up big. A second-down pass from Akron’s Kato Nelson sailed incomplete, but two flags came in on the play, one on Illini safety Kerby Joseph for targeting that was upheld, the other on Eifler, a personal foul for physically retaliating at an Akron player.

The Zips went from having a third down on their own 25-yard line to a first down on the Illini 38 after all the penalty yardage. However, they would come away with zero points and Eifler’s effort on the next play was the main reason why.

“I was really mad that I got a penalty called because the (referee) didn’t see (what) the offensive line did to me, it’s not cool, you can’t tackle somebody after the play like that,” Eifler said. “Coach Smith pulled me aside and (said) ‘you can’t do that’ you gotta keep (your) composure. Next play just saw the screen, jumped the route and then made the play, it was a pretty big moment.”

Indeed Eifler made a big-time legal hit on Akron receiver Michael Mathison, raising his shoulder and making contact after cheating in to blow up a screen pass and force an incompletion, pummeling Mathison to the ground in the process.

The hit sent Mathison to the locker room, but on his own power, and caused quite a stir on social media, including many of Eifler’s friends and family.

“My phone was blowing up crazy,” Eifler said. “Went back to the locker room, took a shower and opened (it) up and (there) was over a hundred messages on Twitter and Instagram. It was pretty cool to see everyone from back home watching the game just recording me and posting it.”

Eifler also added two tackles and a tackle for loss as the Illini defense held the Zips to just 192 total yards.

Though Eifler’s big hit was his most talked-about contribution Saturday, Smith values the linebacker for his versatility and is excited to see him showcase the rest of his skill set as the season progresses.

When asked if his hit Saturday was the best of his career, Eifler offered a cheeky response that may will the excitement of Illini fans about what’s to come for him.