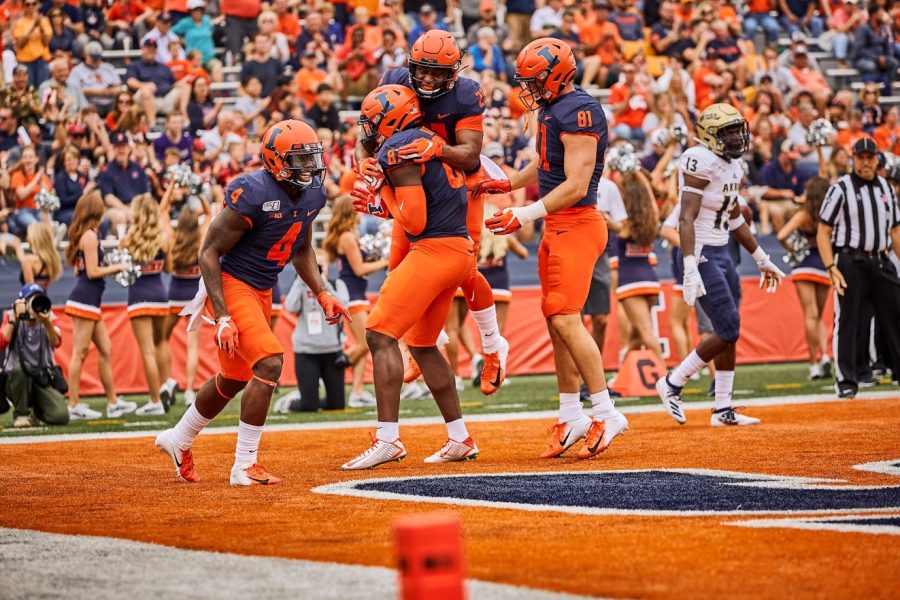 Illinois tight end Daniel Barker (87) celebrates with teammates after scoring a touchdown against Akron on Aug. 31. The Illini faced Connecticut on Saturday. The Illini won 31-23.

Despite a slow start, Illinois rebounded Saturday and held on for a 31-23 victory at Connecticut for the program’s first non-conference road win since 2007.

The Illini’s opening offensive possession resulted in a pick-6, as the Huskies’ Tyler Coyle jumped a telegraphed quick slant pass from Brandon Peters and ran it back 52 yards to give the Huskies a 10-0 lead.

Connecticut would chip in two more field goals, and held a 13-0 lead after the first 16 minutes. However, the Husky lead was short-lived, as Illinois got on the board with a 28-yard touchdown catch from Ra’Von Bonner, then forced a three-and-out before putting another touchdown pass, this time to Josh Imatorbhebhe from 9 yards out, as Illinois went on top, 14-13.

The Illini got the ball back after forcing another three and out and proceeded to march down the field and score again, with Peters finding tight end Daniel Barker for an 18-yard score.

Lovie Smith and company would have certainly taken 21-13 at the half given how poor the Illini were early, but things only got better, as walk-on safety Michael Marchese grabbed an interception with the Huskies driving in Illini territory to set up a field goal to end the half.

Connecticut would get back into the game in the third quarter via a 2-yard touchdown run from Kevin Mensah, but Illinois responded with another touchdown pass from Peters to Imatorbhebhe, with the USC transfer flexing his superior strength and hands over the Connecticut defensive back for a 9-yard score to give Illinois a 31-20 advantage.

The fourth quarter saw the Illini play it safe to maintain the lead, and a late interception from Dele Harding snuffed out the Husky comeback effort.

The Illini moved to 2-0 and will host Eastern Michigan back in Champaign next Saturday.