Illini soccer set to play on new fields this month 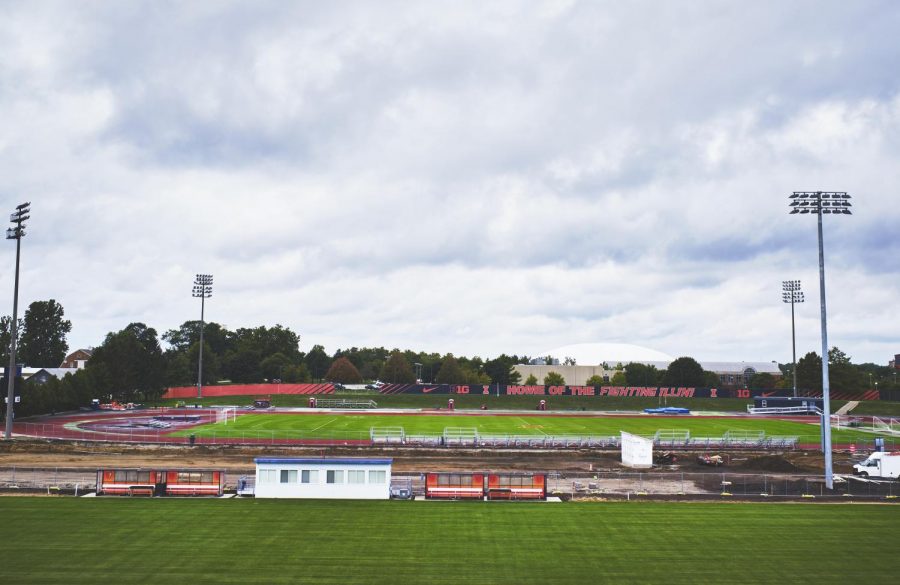 The Illinois soccer team has played at the Soccer and Track Stadium since 1999 but is expected to move to a new home prior to the 2020 season.

In 2017, Illinois Athletics announced the construction of Demirjian Park on the south side of campus, immediately to the east of the Soccer and Track Stadium.

Both the men and women’s track and field teams will not host any home meets this season, and the soccer team is playing in their final season at its current venue.

Illini soccer currently practices at the Soccer and Track Stadium, but once the team moves to Demirjian Park, they will practice on a different field than the one they compete on.

Although construction is slated to be completed in time for the Fall 2020 season, the project’s price recently increased to almost $21 million. The Illinois track and field programs are also planning to host the 2021 Big Ten Championships for their first season in their new home.

The soccer team should be moving into their new field soon despite the complete Demirjian Park project scheduled to be completed in 2020. However, this season the soccer team is planning to play Colorado College on the new fields.

Demirjian Park’s construction was announced in 2017 when junior midfielder Hope Breslin was a freshman. Breslin is looking forward to finishing her college career on the new grounds.

“It’ll be really exciting, just because we’ll know that we have our own stadium to call home,” Breslin said. “We’ll have our own locker room in there, it’ll just be like our own home that we have. Instead of having a separate field and our locker room, it’ll all be together, and I think it’ll just really help us as a team and as a program to just have it all there.”

Breslin said it hasn’t quite sunk in that the team is moving facilities.

Head coach Janet Rayfield said the team is anticipating playing Colorado College Sept. 15 on the new field despite much of the facility, including locker rooms and the practice field, still under construction and scheduled to open in 2020.

“I think as we practice and we see the construction, and you see the green grass, and you see the water sprinklers, there’s certainly anticipation of moving to the new field this season,” Rayfield said.

Rayfield said the team plans to practice on both the new field and the current field this season while construction finishes on the new practice field. She also said the new facilities will benefit not only the soccer program but fans as well.

“I think the biggest thing is what the experience is gonna be for our fans, and for our athletes,” Rayfield said. “Ultimately, to be close to the action, to be able to see replays on the scoreboard, I think our fan experience is gonna completely change, and I think we’re really excited about what that will mean for us.”

Illini Athletics scheduled a “Construction Zone Day” promotion for the Sept. 15 match to celebrate Demirjian Park’s construction. And although the facility will be under construction for the new field’s debut, Breslin said she is excited to play on the new grounds.