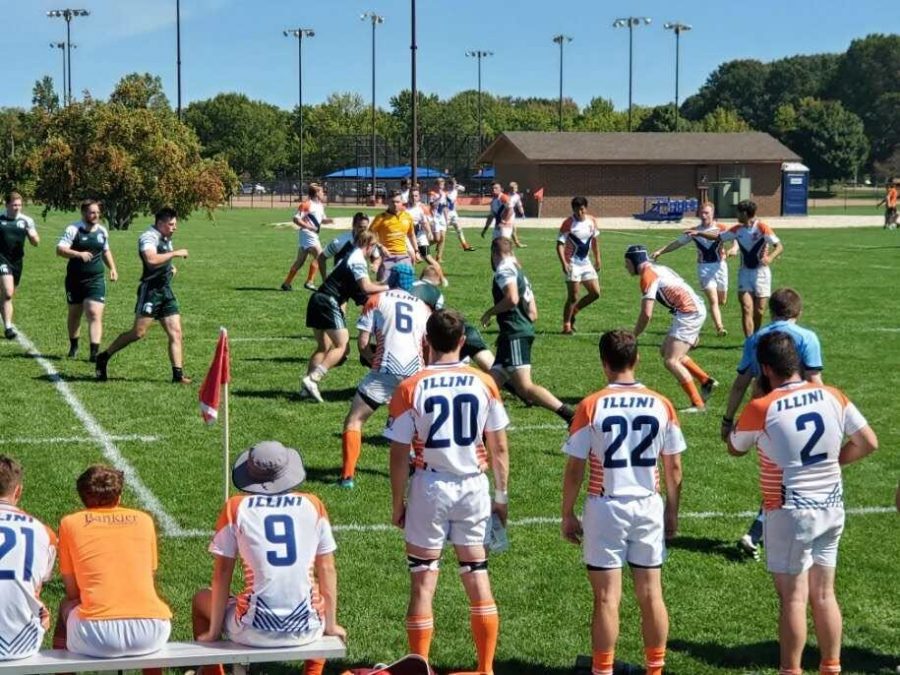 The Illinois Rugby team faces off against Michigan State on Saturday.

The Illinois men’s club rugby experienced a few setbacks at the start of head coach Joe Rasmus’ first year at the helm of the program. The Illini started the fall season in Belleville, Illinois, facing off against the Lindenwood Lynx. A David versus Goliath situation, Illinois held its own against Lindenwood, but lost 28-12 on Sept. 7. This weekend, results were closer with the Illini losing 25-24 to Spartans at home on Saturday.

As any first-year head coach, Rasmus is looking past the outcomes of the matches and focusing on aspects of his team’s performance that have potential — these past two weekends, in particular, he has seen potential in the program’s defense.

“Kudos to our boys; they went out there, they had an absolutely fantastic defensive performance, which I think was really the hallmark of the last two weeks,” Rasmus said. “Our defense has been absolutely incredible. The guys are making big hits every single time.”

Even as Rasmus sets out to build a program, the men’s rugby team has encountered its fair share of difficulties. From struggling to secure a practice field to working with a club team budget while trying to develop a reputation in the Big Ten, the club rugby program has dealt with adversity on and off the field.

In spite of these setbacks, Rasmus views the attitude of his team as one of the advantages of the program despite its growing pains.

“Every time there’s adversity, the boys are reacting in a positive way, picking each other up,” Rasmus said. “It’s absolutely incredible to see.”

As the fall rugby season moves forward, the Illini will continue to compete against fellow Big Ten teams. The Hoosiers, Badgers and Boilermakers are only a few Big Ten teams on the schedule for the Illini this fall.

Crucial to their performance later in the season will be the presence of seniors such as Chris Royer, Luka Pavlakis and Lonnie Buchanan. Their experience and knowledge will aid the team as they look to brush up on some of the weak spots identified by Rasmus — including playing within their defensive quarter of the field and avoiding penalties, which the Illini struggled within their first two matches.

“Our seniors are also really stepping up into leadership roles and driving intensity at practice, so it’s not just me, which makes it easier,” Rasmus said. “Everyone wants to be there and everyone wants to improve.”

Next up, the Illinois men’s rugby team will be on the road at Indiana University to take on a ranked Indiana program on Saturday. It will remain on the road until Oct. 12, facing Purdue at home at the Florida Lincoln Complex in Urbana.