Up to par: Illini place fifth in first tournament 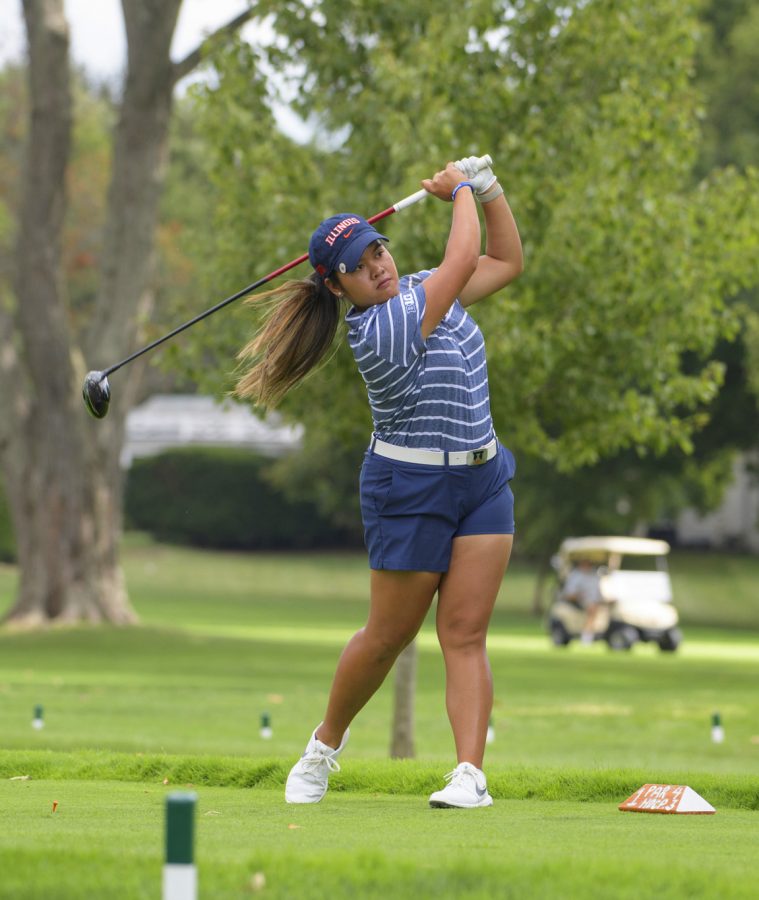 Junior Ali Morallos drives during the Illini’s practice at the Lauritsen/Wohlers Outdoor Golf Practice Facility. The women’s golf team finished fifth as a team at the Glass City Invitational on Tuesday.

The No. 16-ranked Illinois women’s golf wrapped up its first tournament of the fall semester last Tuesday at the Glass City Invitational, finishing fifth as a team. The invite was hosted by Inverness Club in Toledo, Ohio, with three rounds being played on the course over two days.

Aiding the Illini to their top-five finish were sophomores Kornkamol Sukaree and Crystal Wang, who tied for ninth place as individuals; the pair finished 4-over-par for the tournament, with Sukaree walking away with the team’s only under-par round of the tournament on Monday when she shot a 70 in the first round.

Because the majority of the program is comprised of underclassmen — senior Tristyn Nowlin and junior Ali Morallos are the only upperclassmen on the roster — the tone set by Sukaree and Wang at the invite hint at what to expect from such a young program.

Program veterans Morallos and Nowlin also teed up in Toledo this week. Morallos sat three strokes behind Wang and Sukaree, finishing 7-over-par for the tournament. Over three rounds, Morallos picked up 11 birdies — the same amount as the tournament’s individual champion, Natalie Srinivasan.

Nowlin was only a few strokes behind Morallos, tying with freshman Siyan Chen with a score of 9-over-par. The most senior veteran, Nowlin returned to action with the Illini after competing in Stage I of the LPGA Qualifying Tournament in Palm Springs, California, this summer. Her experience showed most prominently in the final round, as she led the Illini with four birdies on Tuesday.

While there were some missed opportunities on the course for the Illini, their strongest consistency came on the par 3. The team was the only one out of 13 teams to be under par for those holes Tuesday. Overall, the team was 10-under on par 3 holes, with all five Illini competing individually under par.

The Illini have three tournaments left on their fall schedule, including their very own Illini Women’s Invitational hosted by the famous Medinah Country Club. Before their own invitational, which will take place Oct. 7-8, the Illini will be on the road at the Schooner Fall Classic in Norman, Oklahoma, Sept. 27-29. The fall season will conclude with the Landfall Tradition tournament in Wilmington, North Carolina, on October 25-27.