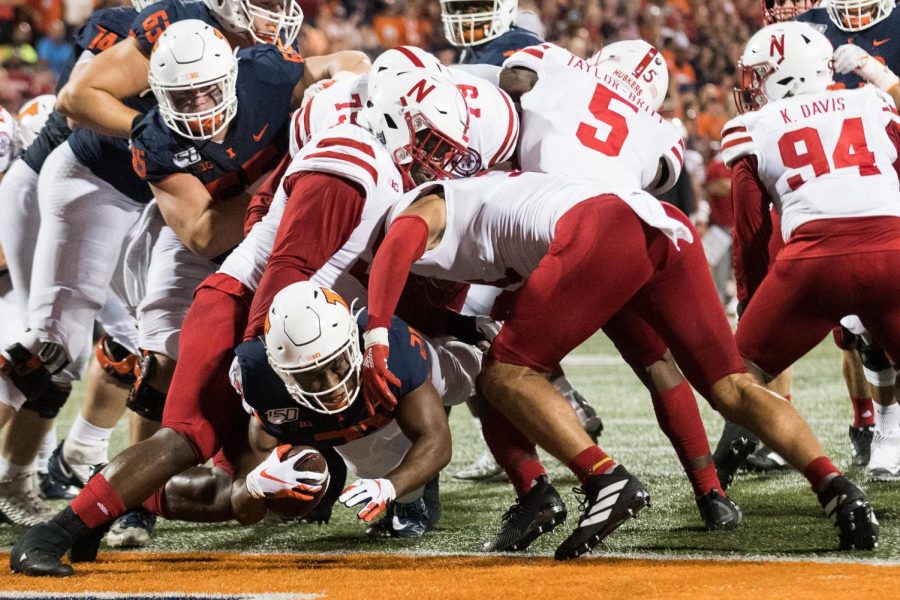 In a battle of two offensive juggernauts, Nebraska topped Illinois 42-38, on Saturday night.

Illinois began the game in ideal fashion, as Reggie Corbin took the second offensive snap of the game for a 66-yard touchdown.

After Jake Hansen recovered a fumble on Nebraska’s second possession, the Illini moved quickly, as Brandon Peters capped a 5-play drive with a 26-yard touchdown to Josh Imatorbhebhe to make the score 14-0.

Nebraska immediately responded with a 10-play scoring drive, as Adrian Martinez connected with tight end Jack Stoll for a 6-yard touchdown to cut the lead in half.

In the second quarter, the teams traded punts, before another Husker fumble set up Illinois on the goal line, and it took just one play for Ray’von Bonner to run for a 2-yard touchdown to put Illinois up, 21-7.

A Brandon Peters interception killed Illinois’ chances to open up a 3-score lead, and Nebraska took advantage, marching down the field and finding the endzone, this time on a 27-yard reception by Wan’Dale Robinson.

Illinois went into halftime leading 21-14, and extended the lead on its first drive of the third, as Dre Brown sprinted to paydirt from 36 yards away.

The Huskers, however, refused to go away, as Martinez led them down the field and found Robinson once again for a 3-yard score, cutting the deficit to seven.

Illinois continued to put up points, as Peters showed off some nifty moves and on a 10-yard touchdown run to give Illinois a 35-21 lead.

Again the Huskers found the end zone when it seemed they were fading, as Dedrick Mills capped a nine-play drive with a 14-yard touchdown to make the score 35-27 after a missed PAT.

After forcing Illinois to go three-and-out Nebraska drove down the field and Mills again scored from 2 yards out, and Martinez ran the two-point conversion in to tie the game at 35.

The Illini were able to grab a late lead through a James McCourt 43-yard field goal, but the defense could not hold the advantage, as the Huskers pounded the ball down the field and took their first lead of the night on another Mills score from the goal line to make the score 42-38.

Despite the Illini defense forcing a missed field goal to set up a potential game-winning drive, the offense could not muster up any positive yardage, going three and out on a drive that ended in controversial no-call on receiver Trevon Sidney.

The loss dropped Illinois to 2-2 heading into a bye week.