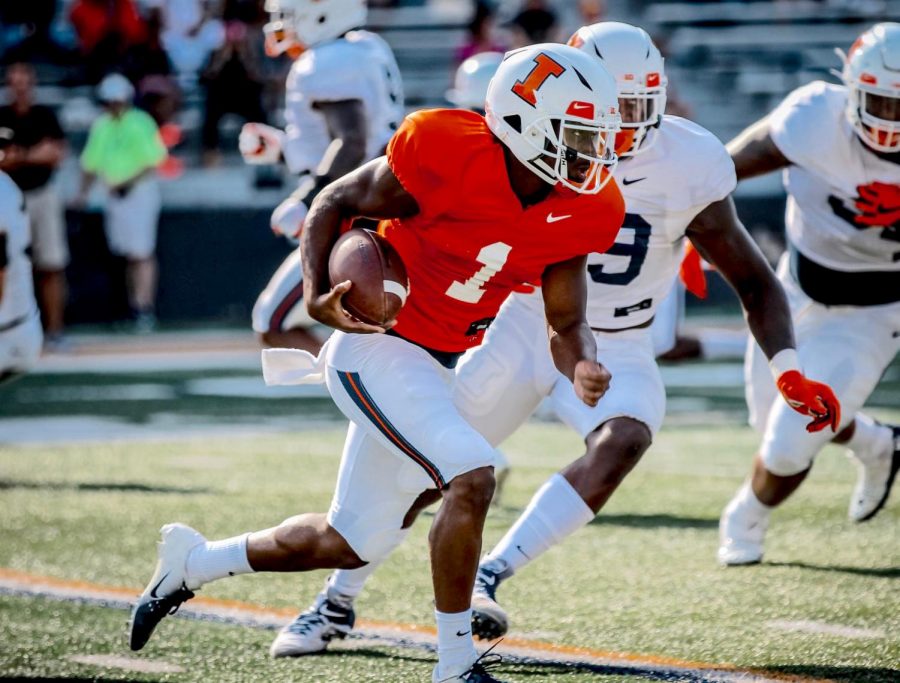 Even a crystal ball couldn’t have helped predict which Illini quarterback was going to use nifty moves to find the end zone on a 10-yard rushing touchdown in the Illini’s Big Ten opener. The first player whose name would have come to mind wouldn’t have been Saturday night’s culprit, Brandon Peters. It would have been Isaiah Williams, who received the first snaps of his collegiate career in the 42-38 loss.

The true-freshman carried the ball twice, getting stopped behind the line of scrimmage for a loss on both occasions.

After Williams totaled minus-three rushing yards on the night, it’s safe to say Lovie Smith didn’t get the most out of his precocious newcomer.

“Didn’t get a lot of production from the plays we put him in,” Smith said. “Eventually, we will. He’s ready to go and eventually he’s gonna really be good, but the situation hasn’t allowed him to play much more.”

The coaching staff has options with Williams, given he can maintain an extra year of eligibility if he appears in four games or less.

Thus far, the coaching staff has turned to redshirt freshman Matt Robinson as the second quarterback behind graduate-transfer Peters. The California native took snaps in games where the Illini had big leads, while also coming in to fire one incomplete pass on the final drive of the game after Peters lost his helmet.

Although Smith has maintained deep confidence in Peters since he was named the starter before the season, the Michigan transfer had an off-night Saturday, throwing for just 78 total yards one touchdown and an interception while going 9-22.

“Passing game-wise, we have to have more production,” Smith said. “I think we had 78 yards or something like that. (On) a night like that, gotta be able to do some things.”

Though the passing game is in need of revamping after a sub-par performance against Nebraska, that is not necessarily an area where Williams could offer a greater option than Peters, as the freshman is more renowned for his speed and rushing ability.

Given how aggressively Nebraska stacked the line of scrimmage and stopped Williams for losses on Saturday, it’s likely Big Ten opponents will be out to stop him in the run game if he’s offered another opportunity on the field, even if it means leaving Illini receivers in single-coverage.

Despite arriving to fall camp as a highly-touted four-star recruit, Williams stressed at media day that he doesn’t want to simply be anointed playing time. The freshman wants to fully grasp offensive coordinator Rod Smith’s system and earn his way onto the field above all else.

Although preserving a year of eligibility is an important goal, the prospect of Williams running a zone-read with Reggie Corbin in the backfield, Daniel Barker running up the seam and Josh Imatorbhebhe getting down the field is a thought which would not only have Illini fans salivating but opposing defenses sweating.