Illinois prepare for No. 3 Nebraska 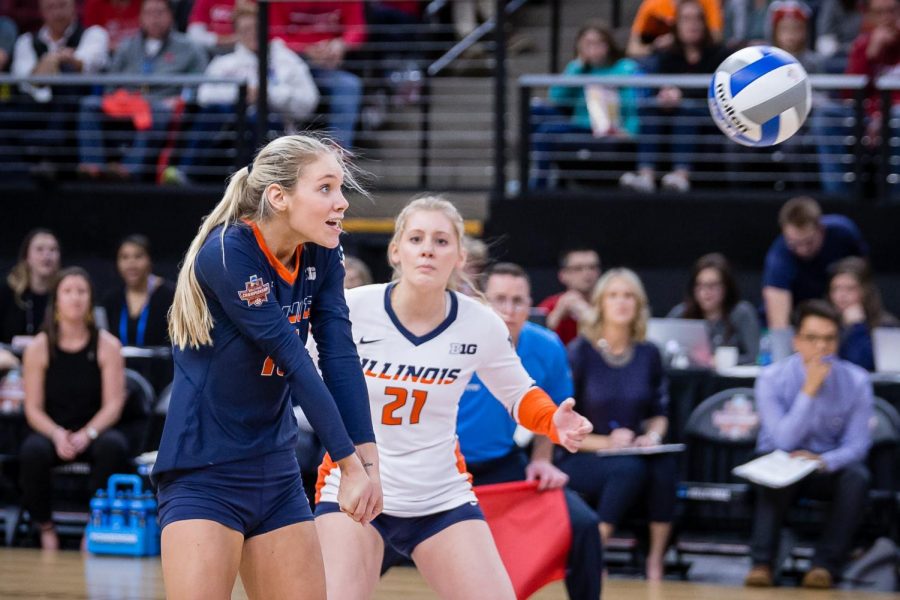 Illinois defensive specialist Megan O’Brien (16) gets ready to pass the ball during the match against Nebraska in the Final Four of the NCAA tournament at the Target Center on Thursday, Dec. 13, 2018. Nebraska defeated Illinois 3-2.

The Illinois volleyball team is preparing to face No. 3 Nebraska after finishing its nonconference schedule this weekend 5-4 after winning it’s last two matches against Pacific and Loyola Marymount. The Illini started the season as the No. 6 ranked team, according to the American Volleyball Coaches Association coaches poll, but have since fallen to No. 20.

After a Final Four appearance last season, a No. 20 ranking right before the start of conference play might not have been what the Illini would have liked to see. But Illini star Jacqueline Quade doesn’t look at other people’s rankings while judging her team.

“I don’t think our team is too concerned with those sorts of things (such as rankings),” Quade said, the team’s returning All-American. “After the course of the season, things will kind of fall into place the way that they should and how they will. I don’t think we really feel like we have anything to prove in that regard.”

In the off-season, the team had to fill a few holes. The Illini graduated two All-American seniors in Jordyn Poulter and Ali Bastianelli, making way for young players to receive time at those positions.

The youth of the team, coupled with injuries before the season to players including Mica Allison, Bruna Vrankovic and Ellie Holzman, and a nonconference schedule, which only included one team that didn’t play in the NCAA tournament last year, contributed to early losses.

However, the Illini have not made excuses for themselves, and the expectations of the team have not changed since the first day of the season.

“The goal is to improve from one day to the next,” said head coach Chris Tamas. “Every year is going to provide a different team for you. Even if you return a bulk of your lineup, you’re still going to have new people you have to get into your systems of play. I just look at it as we have to keep improving from where we started on day one. Now that we’re more healthy, we’re seeing a lot of improvement throughout the whole group.”

There have been bright spots in the team throughout the first part of the season. The younger players have played a part of that as well.

In an upset win over No. 7 Marquette, redshirt freshman Vrankovic earned 10 kills. Freshman Rylee Hinton put up eight blocks over four sets against the Illinois State Redbirds in her Illini debut; redshirt freshman Diana Brown has been a consistent starter at the setter position for the Illini all season, totaling 65 assists in her debut against Tennessee. The team sees the effect going through the non-conference stretch with young players has on the team.

“We all knew that we were young and replacing some important people,” Brown said. “But we are starting to figure out how to play with each other and what balls each person is going to get. (We’re) just trying to mesh with each other. I think we learned a lot about how we focus as a team and honestly just how we work with each other.”

The two wins against Pacific and Loyola Marymount helped expose progress the team has made and the chemistry they have on the court. Tamas praised the team’s ability to adjust in both matches.

Tamas expects more of this in the Big Ten stretch. He knows his team will have to make adjustments in the regular-season schedule, one of the best conferences for college volleyball.

Illinois’ first Big Ten test will be at home against Nebraska, who beat the Illini in the NCAA Final Four last season. Nebraska is currently ranked No. 3 in the nation with a record of 8-1, dropping one match against No. 1 Stanford.

“We don’t expect anything,” Brown said. “We need to earn everything. I think the thing that we expect is that each and every game is going to be a battle. The Big Ten is the best conference in the nation and every single night either team can win.”