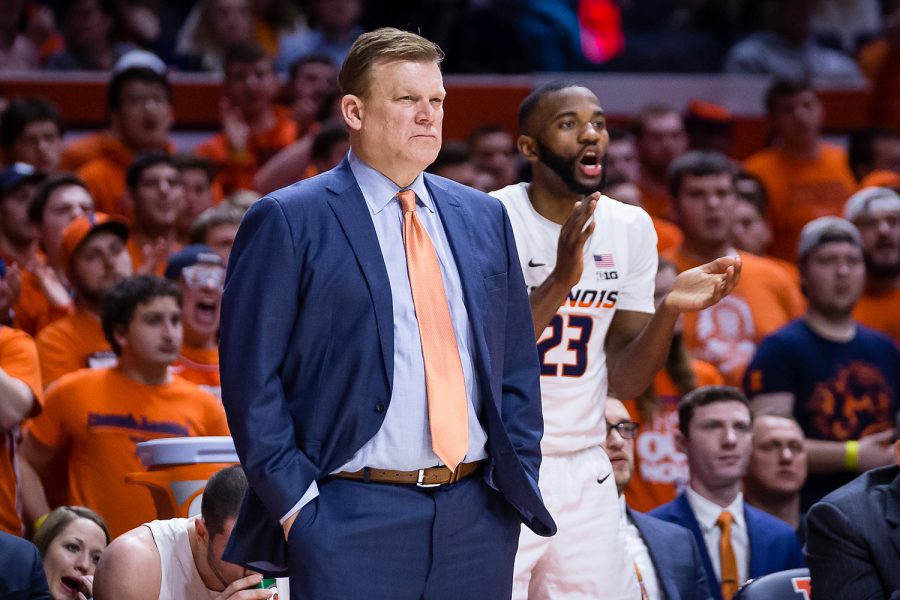 Illinois head coach Brad Underwood watches his team from the sideline during the game against Indiana at the State Farm Center on Thursday. The Illini lost 92-74 in their final home game of the season.

The annual Big Ten Basketball Media Day was headlined by a barrage of questions regarding the new Fair Pay to Play Act, which was signed into law by California Governor Gavin Newsom, which enables college players in California to make money off their likeness and image.

Kicking off the media day was Big Ten Commissioner Jim Delany, as he fielded the most regarding the new law. Delaney made clear he’s not a fan of the proposal, referring back to what he believes the NCAA stands for: education.

“My point would be that the student who plays athletics in the Big Ten is in school for education first. There is an amazing opportunity to get a world-class education here … and if they so choose to prepare themselves to be professional someday, whether it’s in Europe, Asia or in the U.S. But (The NCAA) is unique. It’s not the NBA, it’s not the WNBA, it is an educational arrangement. Full-time students playing basketball or football,” Delany said.

“A lot of progress has been made on behalf of students. I’ve been an advocate for students, but to me, the outer limit is the cost of college,” Delany said. “Once we’re beyond the cost of college, in pay for play, I think that puts us in a totally different game. It probably does affect one or two percent of players, but I would rather see a resolution to have those one or two percent of players to have the opportunity to go directly into professional sports, whether it’s baseball, basketball or football and really not to ask the whole system to turn.”

While Delany’s stance on this hot topic is clear; coaches from several teams have contrasting views on the matter. Coaches such as Illinois’ Brad Underwood, Minnesota’s Rich Pitino and Nebraska’s Fred Hoiberg believe the new law is a sign of progress.

“I’m in favor of players likeness and being able to be compensated for that. I like the model that we have,” Underwood said. “Cost of attendance has been something that’s been an extremely positive thing for our student-athletes. It gives them money in their pockets so they’re not going without it.”

Underwood mentioned how refreshing it was to have returning players and the elevated confidence the team is enjoying at the moment.

“I think we have a different swagger. There’s a different feel about us just from the experience standpoint. I don’t think there is that giddiness of the unexpected. I think we know now we have the ability to have guys that can lead the young guys, that can lead the guys that maybe didn’t play as much last year. I think all those things are positive. I think there’s a confidence that comes with that.” Underwood said. “We see that in our offseason workouts, we’ve seen that this summer in Italy and continue to see that as we head through the fall here.”

“I think he is one of the most conditioned athletes that I’ve been around, he’s a tremendous worker,” Underwood said. “Even though we’re an extremely young basketball team, when you look at our roster we do have some experience and some games under our belt. We’re excited about this group as we continue to build what we think can be a very solid nucleus with our team this year.”

Frazier, one of many Illini who decided to return this season, understands the vital role he has as a leader.

Following a dynamic freshman season, leading all Big Ten freshmen in scoring (14.1 PPG), assists (3.7 APG) steals (1.5 SPG) and three-pointers on the season, Frazier’s numbers dipped his sophomore year as he had to share more touches with Dosunmu’s own playing making ability. Nevertheless, all Frazier cares about is winning.

“I think it’s going to get to a point where it’s not going to be a surprise anymore because we’re going to be so successful this year,” Frazier said.

For Dosunmu, this past offseason was all about taking his game to the next level. After playing his freshman at about 184 pounds, Dosunmu said he’s added muscle over the summer and is now at about 194 pounds.

“We don’t really care what the media has to say, good or bad. Nothing personal, but it’s just that we’re one family.”

Although Dosunmu took a few games to gain his footing, once he did there was no looking back. He was the first true freshman in school history to lead the Illini in scoring for the season, averaging 13.8 points-per-game. Dosunmu also led the team in assists with averaging 3.3 per game. On the defensive end, Dosunmu was third in rebounding and second in steals averaging four and 1.3 per-game, respectively.

Bezhanishvili, like his other teammates, is hungry for the season to start up again. Being the first member of his family to be in this position, Bezhanishvili has yet to have his new life sync in.

“I’m the first athlete out of my family to come so far. I have six (reporters) talking to me, it’s crazy. It’s unbelievable,” Bezhanishvili said. “Nobody has this. This is such a blessing, I’m just happy going forward and hopefully, it’ll continue.”

As Underwood mentioned before, Bezhanishvili’s conditioning and availability came in handy for the Illini last season, especially on the defensive end. Being the only player to start all 33 games, Bezhanishvili led the team in rebounding (5.2 rebounds-per-game) and blocks (26).

Bezhanishvili can also be lethal on the offensive side of the ball. He set an all-time Illini freshman single-game scoring record with 35 points in a win against Rutgers, showing his dominant low post-game.

With Frazier, Dosunmu, and Bezhanishvili leading the charge into the season, the anticipation continues to mount for the season opener against Nicholls State on November 5.