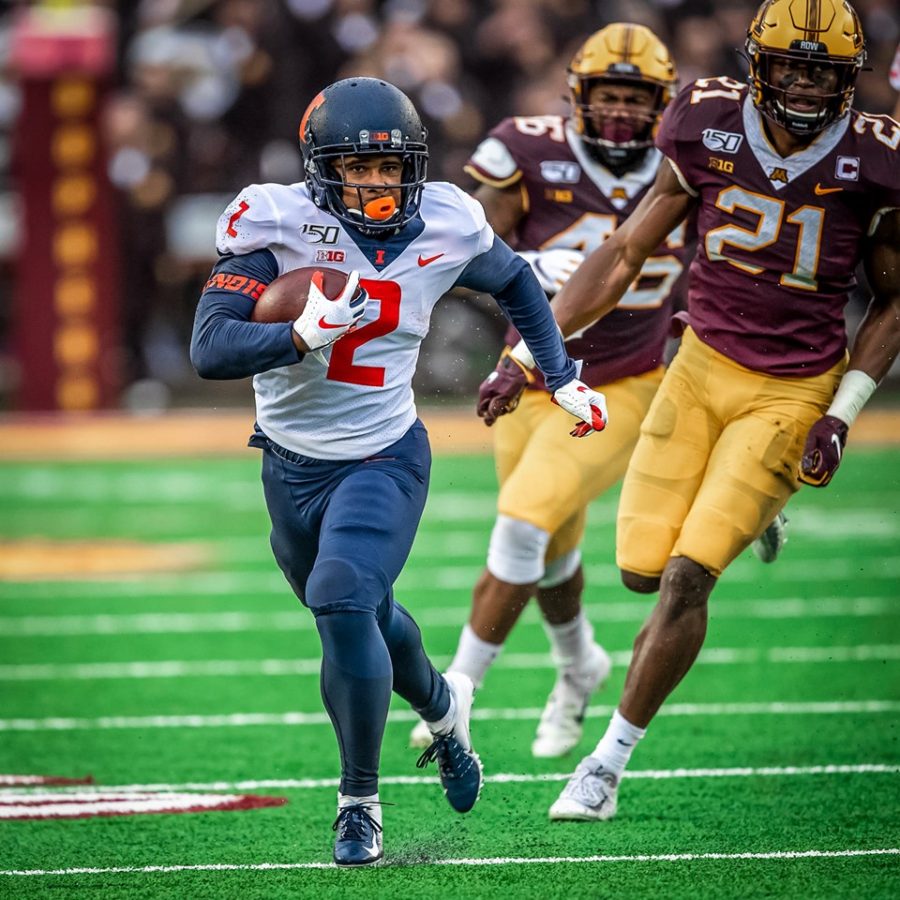 Running back Reggie Corbin sprints away from two Minnesota defenders on Saturday. The Illini lost 17-40.

There was plenty of time to prepare for Minnesota following Illinois’ bye week. Illini fans may have expected the program to dish out a few tricks against the Golden Gophers, but it looked as if the Illini thought it was still on a bye week since nothing seemed to go right in a 40-17 loss on Saturday.

Despite 17 points finding its way onto the scoreboard, Illinois offense was only actually responsible for three, and those points came controversially as well.

With around 10 minutes remaining in the second quarter, Illini quarterback Brandon Peters, who had already thrown one interception deep in Illinois territory, took a shot and was forced to exit the game. With highly rated freshman Isaiah Williams sidelined in practices leading up to Saturday’s contest due to injury as well as having a looming redshirt decision, head coach Lovie Smith turned to redshirt freshman Matt Robinson. The California native is an undersized signal-caller with good mobility yet issue throwing downfield, and that is exactly what he displayed Saturday. Robinson went 15-29 for 125 yards and no touchdowns, often rolling out and throwing the ball out of bounds before receivers could break open.

The lone points put up by the offense came in the final minute of the first half, when James McCourt netted a 46-yard field goal, only after Minnesota head coach P.J. Fleck had mysteriously called timeout a second before the ball was snapped on a missed first attempt.

With the passing game failing to scare the Gophers, tailback Reggie Corbin faced stacked boxes all game long, gaining just 68 yards on 14 carries, a far cry from the 217 yards he went for on one less carry against the Gophers last season.

Receiver Trevon Sidney did have a respectable bounce-back game after remaining quiet in the Illini’s previous two games, catching five passes for 50 yards and frequently bailing out wayward throws from Robinson.

Sophomore walk-on Donny Navarro also caught three passes for 33 yards, a player who has clearly earned snaps at receiver after Smith’s constant praise of his decision making on punt returns.

It was a terrible day, there’s no other way to put it; 248 yards and 3 points are not good enough to get it done against an FBS team, much-less an undefeated, and likely to be ranked, Minnesota squad. The offense was supposed to be the safety net for this team to rely on, but the unit completely sputtered in Peters’ absence and was not effective when he was out there either.

Normally, two takeaways and two touchdowns would be a point of celebration for a defense, but in the case of Saturday’s performance, they served merely as a means to take something positive from an otherwise lackluster outing.

Minnesota quarterback Tanner Morgan was coming off of arguably the most impressive statistical game from a quarterback in the FBS this season last week at Purdue, and it was believed that he would need to replicate something similar for Minnesota to win.

However, the Gopher quarterback had quite a pedestrian game, throwing for just 155 yards, missing open receivers and turning the ball over twice for points, as Dele Harding took a first-quarter interception to the endzone and Milo Eifler recovered a fumble and walked in for six in the third quarter.

Fortunately for Morgan, the Illini defense could not contain his running backs, as Rodney Smith rushed for 211 yards and a touchdown while Shannon Brooks added another 111 yards and a score.

The issues the Illini defense has failed to address for the better part of the last two seasons have been open-field tackling and coverage down the field, both of which remained a problem on Saturday.

Although the Gophers were not great offensively, they still found ways to get their speedy backs in open space and their tall receivers isolated against Illini defensive backs, two areas that have constantly given Illinois problems.

The toughest aspect that this defense will have to live with when it watches the tape back is that Minnesota was inefficient and sloppy offensively, yet still hung 40 on the board.

Anytime a group of three defensive players are responsible for 14 points, some recognition is in order.

Harding got Illinois on the board in the first quarter with a 40-yard pick six, his second interception of the season.

Furthermore, at the end of the third quarter, Hansen got home on a blitz and rocked Morgan as he was winding up to throw, and fellow linebacker Eifler picked up the rolling fumble and returned it 7 yards for another Illini touchdown.

Normally, a higher grade would be in order for such a performance, but the trio again struggled to wrap up tackles on the first contact with Minnesota’s running backs, as the Gophers ran for 332 yards as a team.

There’s very little that can positively be taken away from Saturday’s game. The Illini, now 2-3, had two weeks to address the issues that many both inside and outside the program knew they had, and they simply failed to improve in any of those areas.