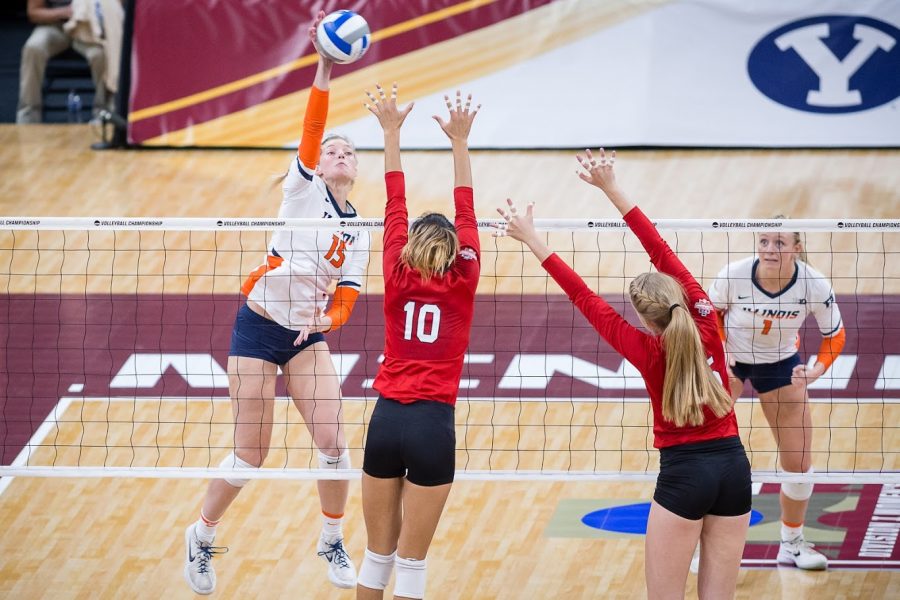 Illinois outside hitter Megan Cooney (15) spikes the ball during the match against Nebraska in the Final Four of the NCAA tournament at the Target Center on Thursday, Dec. 13, 2018. Nebraska defeated Illinois 3-2.

On Sunday, the No. 18-ranked Illinois volleyball team (8-5, 3-1) finished its weekend road trip against No. 17 Purdue (9-4,1-3), winning the match three sets to one behind a career-high for kills from junior Megan Cooney.

After winning both road matches, the team is now on a three-match win streak, and the Purdue contest marked the second time this season Illinois has beaten a team ranked above them.

The match started slow for the Illini, as the Boilermakers’ defense held them to a .118 hitting percentage to go along with 12 attack errors resulting in a 30-28 loss. However, the Illini finished the set on a 7-1 run and fought off five set points to build momentum off of their first set loss.

“I think it was obviously really important to continue on through (the first set),” said head coach Chris Tamas. “It was great that we were able to stick with it, and almost win the first set. Then I think that momentum just continued on into the rest of the match.”

In the second set, the Illinois defense stepped up and held Purdue to only nine kills on a .069 hitting percentage and forced them into seven attack errors. The Illini won the second set 25-17, evening up the match score to one set each. Illinois continued its defense in the third set, winning 25-14.

The Illini finished off the match in the fourth set 25-21, getting 16 kills with a .238 hitting percentage.

“I think when we’re playing great defense it makes everything better,” said senior Ashlyn Fleming. “That’s what (Tamas) said right from the beginning was that our blocking (defense) was great in this game, and I completely agree. It just kind of started with our serving, when we serve super tough it allows our blockers to get good touches … It just makes everything a lot easier.”

“It’s going well, for sure,” Cooney said. “I think just working on it every day in practice and getting my connections down with (Diana Brown) has been really key. Just practicing every different scenario I could get in a match, replicating it over and over again in practice, has really helped me.”

Illinois will have another opportunity to beat a team ranked above them as No. 6 Minnesota comes to Huff Hall Wednesday for its first match against Illinois this season. Minnesota won their matchup last season in a sweep.

“We know their style of play,” Tamas said. “I think it’s just about matchups and being able to recover for the game … We’ll show the team their film. It’s apart of Big Ten, every Big Ten team is good … We’ll be ready for them in Huff on Wednesday.”