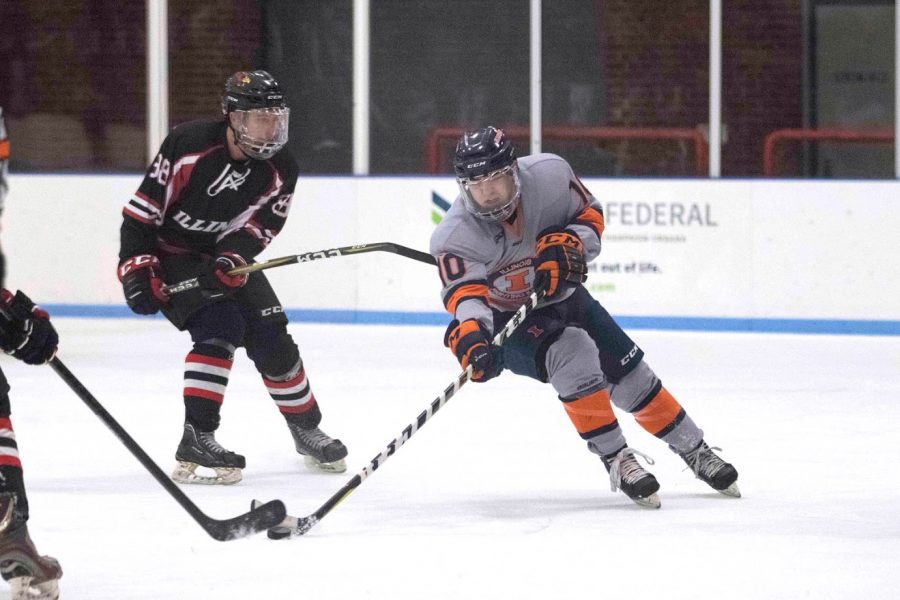 Illinois traveled to Edmond to take on Central Oklahoma for a two-game series, its first road trip of the season. After two hard-fought battles, the Illini split the series, falling victim to the Bronchos in game one before exacting revenge in game two. Both games featured an offensive shootout with the Illini starting out strong and the Bronchos having to play catch-up.

On the first Friday night, Illinois and Central Oklahoma both came out strong, each scoring a goal in the first ten minutes of play before settling down defensively.

But after 18 minutes of a deadlocked game, Illinois broke through Central Oklahoma’s defense, scoring on two quick goals from two of their senior forwards, Neil Novosel and Jon Moskaluk, in the final two minutes of the period. After 20 minutes of play, Illinois looked like they were in control with the 3-1 lead.

“We did a great job of attacking with speed on the rush,” said head coach Nick Fabbrini. “It is the hallmark of our game.”

But the Illini were unable to cash in on the late first-period success and ride the momentum to an easy first road victory, and the Bronchos made sure of that.

After just 31 seconds after the second-period puck drop, the Bronchos quickly took control of the puck, going down the ice and scoring on an Austin Cunnigham to cut the Illini lead 3-2.

The Bronchos weren’t done yet. They scored another goal on a shorthanded Illini lineup after a Braden Stewart penalty, to tie it up at 3-3. The Illini were able to strike back, though, with Stewart shaking off the penalty to score and put his team back up with 2:42 left before the end of the second period. The Illini were able to hang on defensively for the rest of the period, going into intermission with a 4-3 advantage.

Holding on for dear life, the Illini were able to stave off the Bronchos for much for the third period. But after 15 minutes of third-period play, Central Oklahoma was finally able to get the puck past Illinois goalie Jake Barnhart and tie the game up at 4-4. The Illini were unable to respond offensively, resulting in the Illini’s third overtime game of the season.

After three scoreless minutes of overtime play, the Bronchos finally broke the tie with a goal from forward Vitalli Mikhailov, winning the game 5-4 and dropping the Illini to 3-2.

“In overtime, we talk about the same things,” Fabbrini said. “We had chances but they were the ones who were able to capitalize.”

On Saturday night’s game, the Illini once again came out almost unstoppable, jumping out to a 5-0 lead with each goal coming from a different player, very much similar to the last week’s opening period in their 10-1 victory over Michigan State. Central Oklahoma was finally able to crack the scoreboard with 1:12 left in the first period. After one period of play, the Illini lead 5-1, on track to break their two-game losing streak.

The third period did not go completely smooth for the Illini, who were trying to avoid the same result as the previous night: a blown third-period lead followed by a loss. With 7:08 left in the third period, the Bronchos were able to cut the lead to 5-4 on their fourth unanswered goal, and it looked like the Illini were facing the possibility of another overtime.

Luckily for the Illini, they were able to tighten up defensively and held the Bronchos scoreless for the rest of the game before capping it off the victory with a Zach Hayes’ empty netter to extend their lead to two goals, allowing the Illini to escape with a 6-4 road victory.

“I told them we deserved to win the hockey game,” Fabbrini said. “It was nice to see us band together and pull it out.”

The Illini held off a furious Broncho rally to split the weekend road series and improve the season to 4-2. Illinois is coming back home this weekend for another two-game series, this time with Lindenwood.