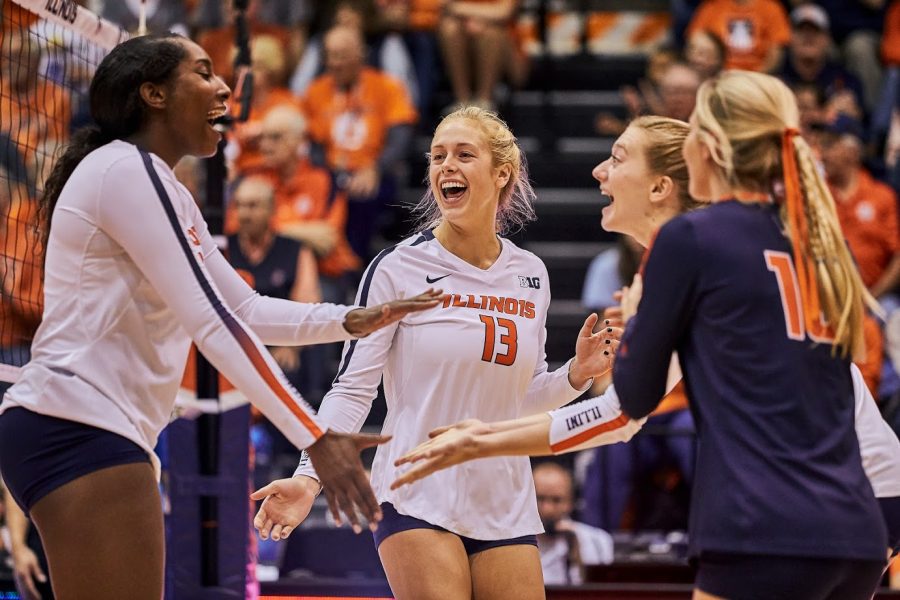 Mica Allison (13) celebrates with her teammates after scoring during Illinois’ game against Indiana on Saturday. The Illini swept

The No. 17 Illinois volleyball team (9-6, 4-2) took down the Indiana Hoosiers (12-7, 1-5) in a clean sweep at Huff Hall on Saturday, marking its 16th consecutive victory and a season sweep against the Hoosiers.

The match was the second time in eight days the two teams played one another,.With the Illini sweeping the Hoosiers in the first match, history repeated itself on Saturday.

“Every team in the conference is good, so we don’t take anything for granted,” said head coach Chris Tamas. “So when you’re able to have a performance like that, it’s nice. You’re always going to take those, but we know it’s not the norm in our conference.”

With Saturday’s victory, Illinois nabs its fourth conference win of the season, along with some momentum. The team’s offensive performance was a marked improvement from their previous game, where the team lost a tough match against Minnesota.

“Looking back at film on Minnesota, we left a few points on the board, but we gave it our all and that’s what we ask them to do every single time we step on the court,” Tamas said. “And we did that again tonight, and we saw a good result because of it.”

In the first set, the Illini got off to a quick start, racking up 11 kills and a .360 hitting percentage compared to the Hoosiers’ three kills and -.143 hitting percentage. Quade, Fleming and sophomore Mica Allison each led the way with three kills each. Illinois made it look easy, as they were up 15-6 at one point, forcing the Hoosiers to call a timeout, and later took the set by a score of 25-10.

The second set began in a back-and-forth fashion, but the Illini quickly gained traction on the offensive side of the ball. They put up another 11 kills, with Quade and Allison tacking on three more kills to their tallies. O’Brien also led the team with five digs after the second set. The Illini limited their mistakes, while also having a hitting percentage of .562.

The Hoosiers struggled with self-inflicted wounds from the first set, which also lingered into the second set. Indiana had two service errors, six attack errors and a measly -.043 hitting percentage in the second set that cut any momentum for a comeback.

Redshirt senior Beth Prince made an appearance in the second set to a standing ovation after missing the past 10 games due to injury and subsequently had the set-winning kill as the Illini took the second leg 25-13.

“I was just excited to be able to put on the jersey tonight,” Prince said. “It’s been a while since I’ve gotten to suit up with the girls, so just that was enough for me. The reaction from Huff was heartwarming and I really love it here. I think that we’ve really come together, and we’ve really focused on making eye contact during plays, trying to be as direct as we can, and that really shows in a lot of actual skill, too, because you just trust your teammate even more to just make that play, and you know the girls around you have your back.”

In the third set, the Hoosiers continued to cause trouble for themselves, and Illinois refused to relent as they fed off Indiana’s mistakes. The Hoosiers had a .000 hitting percentage and a game-high eight attack-errors, allowing Illinois to come away with a 25-14 victory.

When it was all said and done, Indiana committed more attack errors (21) than they had kills (19). On the other hand, the Illini only had seven attack errors and 37 kills.

For the Illini’s next game, the team will travel to Madison to face off against the Wisconsin Badgers on Oct. 18 at 8 p.m.