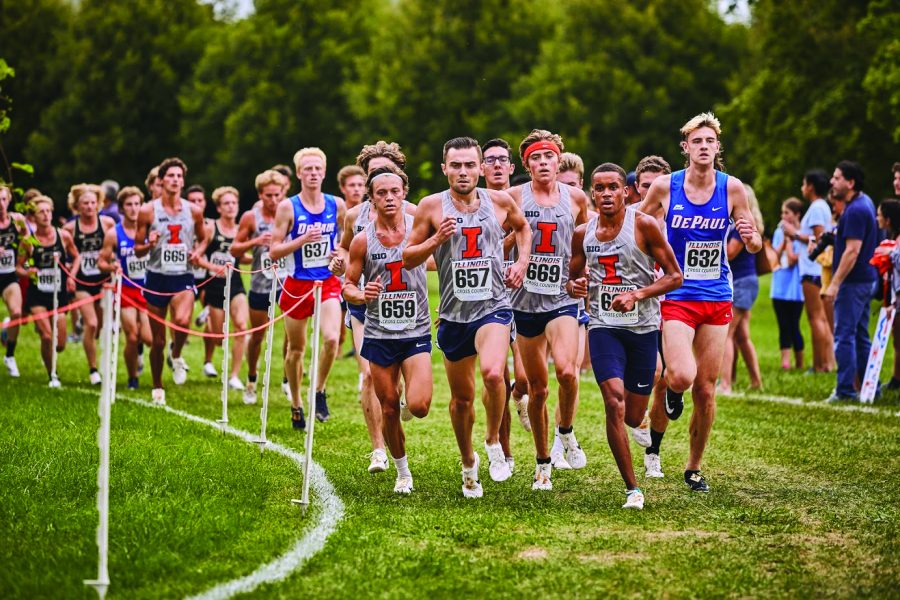 The Illini men’s cross country team leads the pack during the Illini Open at the University Arboretum on Aug. 30. Illinois will head to Peoria, Illinois, to compete in the Bradley Pink Classic on Friday.

The Illinois men’s cross country team will be traveling to Peoria, Illinois, for the Bradley Pink Classic hosted by Bradley on Friday at the Newman Golf Course. With this year’s meet being an open invite to all Division I, II and III teams, Illinois looks to improve its fall season after placing sixth at last Saturday’s Buckeye Preview at Ohio State in Columbus, Ohio.

With Pre-Nationals happening the day after the meet at Indiana State in Terre Haute, Indiana, Illinois is looking to establish a standout performance, especially from redshirt sophomore Irwin Loud, who individually earned a top-10 spot at the Buckeye Preview, clocking a new personal best in the 8k at 24:55 seconds. Other Illini have been making strides on the course, too, such as sophomore Colin Yandel, who finished 33rd overall and redshirt senior, Zach Dale, who finished 35th at the Buckeye preview.

The last time Illinois competed at the Bradley Pink Classic was during the 2018 fall season when the team finished with five Illini in the top-50 individually. Only two of Illinois’ current runners participated in the classic last year, including current sophomore Logan Hall and Dale. Both Hall and Dale were also contributors at the Buckeye Preview as well.

There will be no other Big Ten team besides Illinois competing in this year’s classic. However, schools in Illinois, such as the University of Illinois at Chicago, Illinois State, Northern Illinois, Eastern Illinois and Loyola, will be competing.

This year’s Bradley Pink Classic consists of two races for the men. Some athletes will be competing in the red race, which takes place at 1 p.m., followed by the white race beginning at 2:30 p.m.