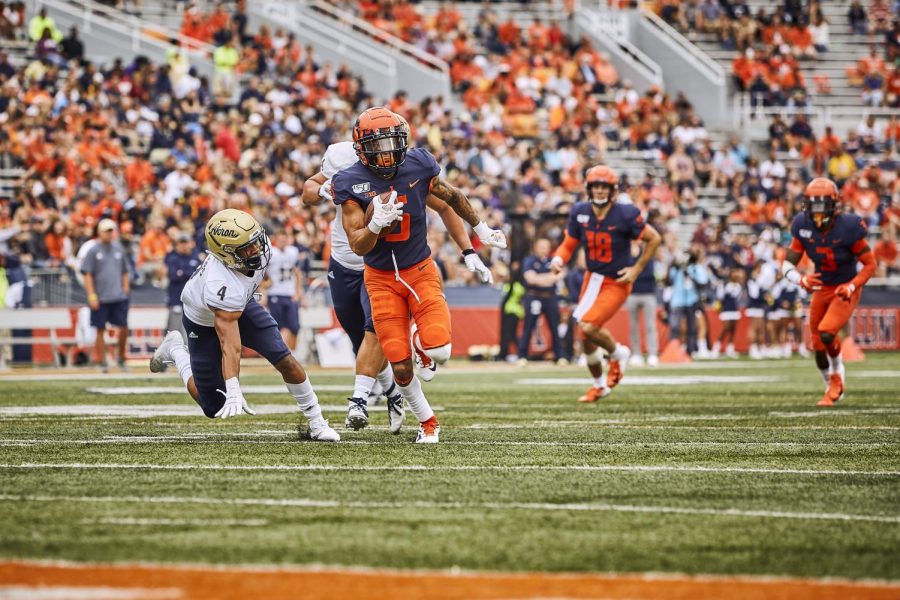 Illinois wide receiver Trevon Sidney runs for a season-opener touchdown against Akron on Aug. 31. Sidney sustained an injury on his left leg on Oct. 5, ending his 2019 season.

Graduate transfer and wide receiver Trevon Sidney will be out for the rest of the season, according to an announcement from Illinois Athletics and head coach Lovie Smith on Tuesday afternoon. Sidney sustained a left leg injury on the road at Minnesota on Oct. 5 and was out for both the home games between Michigan and Wisconsin.

A Southern California transfer, Sidney scored his first touchdown for the Illini during the season-opener against Akron on Aug. 31. Against Minnesota, he picked up a season-high 50 receiving yards before being injured.

Currently, Sidney is third on the team with 16 catches for 123 yards. Injury has been a concern for this Illini squad, as Sidney joins running back Mike Epstein as the second Illini to sustain a season-ending injury on the field. The status for multiple Illini players remain unclear for Saturday following injuries during their Homecoming victory against the Badgers.

Smith’s announcement follows a historic homecoming upset against No. 6 Wisconsin. Illinois is on the road this weekend at Purdue.