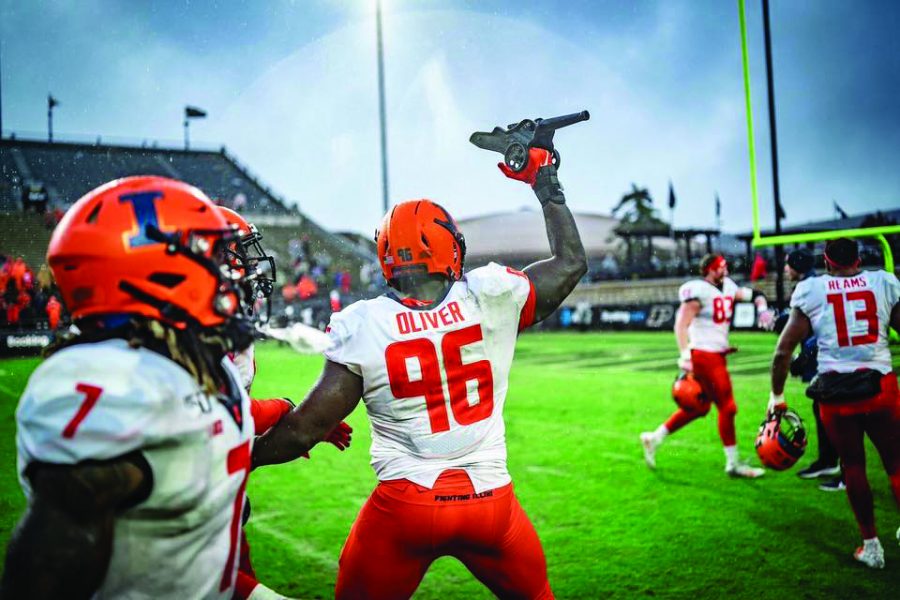 After dealing with several injuries to key players and having never won consecutive conference games under head coach Lovie Smith, hopes weren’t high heading into Saturday’s game at Purdue for Illinois. The Illini appeared to hit a turning point in this season, however. Tenacious defense and successful running led them to a 24-6 victory over the Boilermakers.

The Illini put 3 points on the board to open scoring, but it looked as though points would be hard to come by early on. But, after recording arguably the most important turnover in Illinois football this decade with a late interception to set up the game-winning field goal against Wisconsin last week, safety Tony Adams struck again, jumping in front of an ill-advised, floating pass from Purdue’s Jack Plummer and returning it 13 yards for a touchdown.

From there on out, the Illini ran the ball like their lives depended on it. Dre Brown led the way with 131 yards while Reggie Corbin was his usual self with 47 yards and a touchdown.

The wet and windy conditions prevented the Illini from doing much of anything in the passing game, although it didn’t help that starter Ricky Smalling was out due to injury. Quarterback Brandon Peters only threw for 26 yards on 3-6 passing the entire day.

The aerial attack wasn’t necessary on Saturday though, since two big-chunk runs from Brown put the Illini on the doorstep before Peters found the end zone on the ground from 1 yard out to give Illinois a 17-0 lead.

The Illini carried that lead into the half and added to it late in the third with a 20-yard touchdown run from Corbin after a fumble recovery from Dele Harding.

Smith has constantly preached taking the ball away during his tenure at Illinois, and the Illini continued to show improvements in that area with two on Saturday, both setting up scores.

The Boilermakers would tack on a late touchdown, but the score did nothing more than ruin the Illini shutout, as the team held on for a 24-6 victory.

While last Saturday’s win over Wisconsin was undeniably more important and impressive, the victory in West Lafayette, Indiana may have been Illinois’ most dominant win in the Lovie Smith era respective to the opponent.

Missing quarterback Elijah Sindelar and play-maker Rondale Moore, Purdue just could not move the ball on Illinois’ defense, which, itself, was missing standout defensive end Oluwole Betiku. The Boilermakers thrashed the Illini 46-7 in the 2018 homecoming game, so Saturday provided a sweet taste of revenge for Smith’s team.

Illinois, 4-4, hosts Rutgers next weekend, a matchup that undoubtedly favors Illinois, who now has the program’s first bowl bid since 2014 an arm’s length away.

The win Saturday ensured this season will at least tie for the most successful during Smith’s tenure from a win-loss perspective, regardless of how the season finishes.

The three-game stretch between Eastern Michigan and Minnesota looked as though it would decimate Illinois’ season, but the Illini have rebounded quite nicely and are set to finish strong down the stretch.