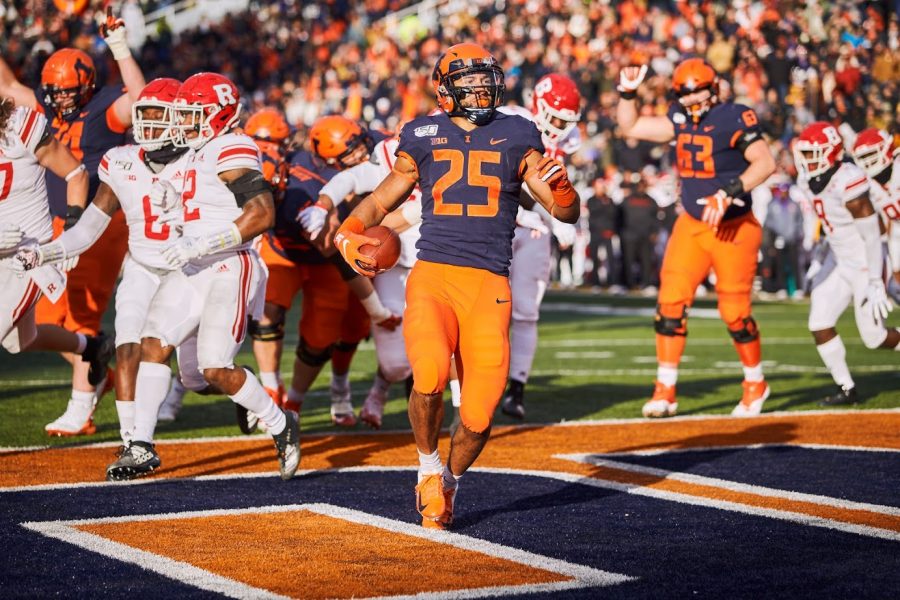 Running back Dre Brown crosses the goal line for a touchdown during the Illini’s game against the Scarlet Knights at Memorial Stadium Saturday. The Illini rushed for 204 total yards and won 38-10.

Illinois cruised to a 38-10 victory over Rutgers Saturday, earning the program’s first three-game win streak since 2011. Although it has been a tough year for the Scarlet Knights, the Illini went to work, improved to 5-4 and are just one win away from their first bowl berth since 2014.

Although the scoreboard read that 38 points were scored, the Illini offense contributed to just 24 of those.

Quarterback Brandon Peters had his usual game, performing situationally well while not putting up a huge stat line.

With the game tied at 10, a scoreline annoyed some Illini fans given the hot streak they’ve been on lately. Peters ran a speed option to the right and faked a pitch to running back Reggie Corbin before motoring past several Rutgers defenders on his way toward the end zone.

Peters looked to be in for a 56-yard touchdown but was caught from behind at the 2-yard line. Offensive coordinator Rod Smith constantly reiterates Peters is faster and more athletic than he’s perceived to be, and the signal-caller proved so on the long run.

“Definitely my longest run since pee wee football,” Peters said. “I was gassed, I’m not even gonna lie. I just wish I woulda had that breakaway speed to get into the end zone.”

Running back Dre Brown punched it in from two yards out on the very next play. The senior totaled 31 yards rushing and two touchdowns on the day.

Brown had a laugh at Peters’ expense regarding the long run as well, joking it was karma for Peters’ rushing touchdown last week at Purdue after Brown was stopped short of the goal line.

Peters ended the day throwing for 120 yards and one touchdown, as the offense had some special moments on the day, but was quiet for long stretches in the first half.

Josh Imatorbhebhe totaled 56 yards receiving and yet another receiving touchdown, his seventh of the season.

The University of Southern California transfer had another score taken off the board controversially on a play where he looked to have secured the catch legally.

Overall, the unit made splash plays but started slow. Luckily for the Illini, the Scarlet Knights failed to capitalize on the early apathy.

After missing standout defensive end Oluwole Betiku, the unit was shorthanded on the edge, forcing Head Coach Lovie Smith to play outside linebacker Ayo Shogbonyo out of position, upfront.

The defense didn’t miss a beat, however, keeping the Rutgers’ offense in check while Peters and Co. started slowly.

In the second half, the unit made three impact plays that ignited a 28-0 run from Illinois to conclude the game.

First, defensive back Nate Hobbs scooped up a fumble caused by defensive lineman Isaiah Gay sack and returned the ball 36 yards for a touchdown.

For Hobbs, it was a special moment, as he earned his way into the “touchdown club,” a special group Lovie has designated for defensive players who take the ball to the house.

“It’s like a board in the defensive room, it’s an exclusive touchdown club and coach (Lovie) Smith (has) been teasing me about (not being in) it,” Hobbs said. “Once I got the ball in my hands, I knew exactly what I had to do.”

The next major play came on the following Rutgers possession, as linebacker Dele Harding forced yet another fumble, which was recovered by defensive back Stanley Green and set up Imatorbhebhe’s 52-yard touchdown.

straight drives ending in turnovers, the Scarlet Knights failed to make the necessary changes, as their following possession again ended in an Illini takeaway, as Harding stepped in front of a hurried throw from Rutgers quarterback Johnny Langan and returned the ball 54 yards for the second defensive touchdown of the game.

The unit was sound on Saturday, but it’s hard to gauge the true impressiveness of the performance given the opponent.

Harding was simply everywhere against Rutgers, racking up 12 total tackles, two tackles for loss, a forced fumble and the big pick six. The senior is having a breakout season, and he showcased his improvement in each area of his game on Saturday.

“What can I say about Dele Harding?” Lovie said. “Senior, captain, makes all of the calls, big hits, interceptions, touchdowns; (he makes) just outstanding plays.”

Harding came into Saturday’s contest leading the conference in total tackles, and he only padded his total against Rutgers.

Despite standing out individually, Harding attributed his success both on Saturday, and overall this season, to sound team play from each level of the defense.

“I just credit those guys up front,” Harding said. “I’m not taking all of (the credit); it’s a defensive unit thing. You can’t single out a guy in football, period, whether it’s pressure upfront or coverage in the back end.”

For Illinois, being a rare favorite didn’t cause a letdown, a problem that has plagued the team against Rutgers in recent seasons. Rather, each unit did its job and let Illinois’ superior talent take care of business.