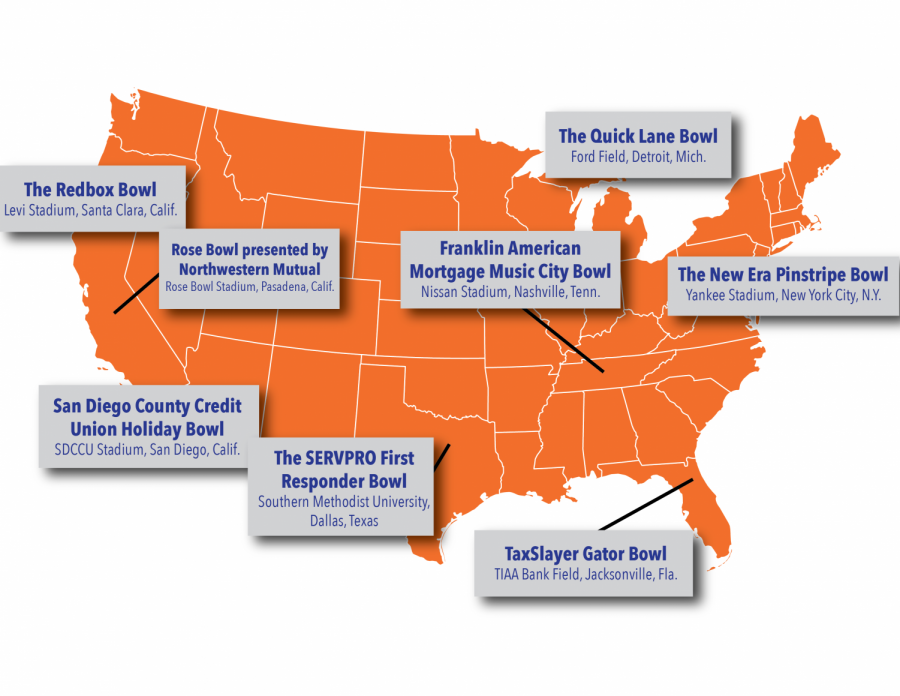 Head coach Lovie Smith made it no secret in his postgame press conference that he talked with his team about the possibility of a bowl game for the first time after Illinois’ 38-10 victory over Rutgers, leaving the program one victory away from a bowl berth with three games to go.

He proclaimed each of the following three games against Michigan State, Iowa and Northwestern, respectively, will be viewed as playoff games by his team — a clear statement of the program’s desire to make a bowl game.

If the Illini can successfully secure a sixth victory, or even win seven or eight games, there are several possible postseason destinations.

Played at Ford Field in Detroit on Dec. 26, the game would likely pit the Illini against a team from the Atlantic Coast Conference. In last year’s Quick Lane Bowl, Minnesota defeated Georgia Tech 34-10, and the Golden Gophers have been on a roll ever since.

Formerly known as the Zaxby’s Heart of Dallas Bowl, this game served as the location of Illinois’ last bowl appearance, a 35-18 loss to Louisiana Tech in 2014. The Illini would face a team from Conference U.S.A. in Dallas on the campus of Southern Methodist University on Dec. 30. If selected for the game, the matchup would be the Illini’s most favorable.

Taking place at Levi’s Stadium in Santa Clara, California, the home of the San Francisco 49’ers, Illinois would face a Pac-12 opponent on Dec. 30 if selected for the Redbox Bowl. In 2011, Illinois played in the previous version of this game, the Kraft Fight Hunger Bowl, defeating University of California, Los Angeles 20-14. Oregon defeated Michigan State 7-6 in the 2018 Redbox Bowl and, like Minnesota, has ridden the momentum of that bowl victory into a successful 2019 season thus far.

Easily the most glamorous of the possible bowl locations, Illinois would play Atlantic Coast Conference opposition in New York City at Yankee Stadium on Dec. 27 if selected. Wisconsin defeated Miami 35-3 in the 2018 Pinstripe Bowl.

The Big Ten and ACC agreed to send a team to these two bowl games three times between 2014 and 2019 to face a Southeastern Conference opponent. However, the situation as to which conference is going where in 2019 is a bit clouded due to the Gator Bowl being played twice in 2016. Following the reshaping of the bowl schedule in 2016, six Music City Bowls and seven Gator Bowls will have been played over the course of the agreement. If Illinois is picked for the Music City Bowl, it will play in Nashville, Tennesse, at the Nissan Stadium on Dec. 30. If the team gets picked for the Gator Bowl, the Illini will play in Jacksonville, Florida, at TIAA Bank Field on Jan. 2.

The possibility of playing in this game is quite small, but theoretically, if Illinois wins out and a few other results go its way, it could wind up as the fourth-best team in the Big Ten and earn a bid to the Holiday Bowl against a Pac-12 team in San Diego, California, at SDCCU Stadium. Northwestern beat Utah 31-20 in the 2018 Holiday Bowl.

There is a scenario out there where Illinois could win the Big Ten West and qualify for the Big Ten Championship Game, where a berth in the Rose Bowl in Pasadena, California, would be on the line. If so, a return to “The Granddaddy of Them All” for the first time since 2008 would signal the rebuild to be complete at Illinois for Smith. This possibility, while highly unlikely, is still mathematically in play, which gives Illini fans something to dream about until it likely fades away in the coming weeks.

Before the Illini can worry about where they’ll be headed, they need to secure a sixth victory. While it won’t come easy, Illinois’ current three-game winning streak is instilling the roster with more confidence game by game, with several players including cornerback Nathan Hobbs and wide receiver Josh Imatorbhebhe expressing an expectation to win all three of the remaining games after Saturday’s win over Rutgers.

Correction: a previous version of this article states Illinois had not been to a bowl game since 2008. The Daily Illini regrets this error.