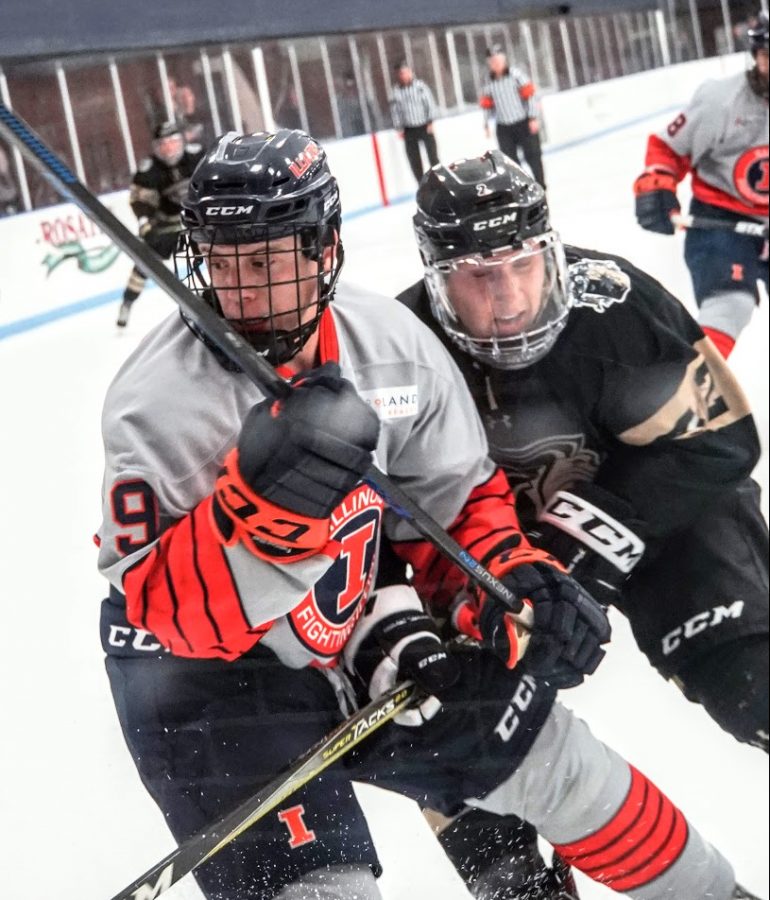 Chance Homerin defends the puck as a Lindenwood defender attempts to gain possession at the Illinois Ice Arena on Oct. 18.

After weeks of hard-fought battles and facing some of the most elite club hockey teams in the nation, Illinois returned home to face Maryville.

With continued defensive improvement and a breakout weekend from freshman forward Zach Hayes, who scored four times, the Illini were able to dominate the Saints, winning 7-2 and 5-2, respectively, improving their record to 7-3-2. But despite sweeping Illinois State during opening weekend, Illinois must still prepare to face Iowa State on the road.

“We want to enjoy them while we get (wins),” said Illinois head coach Nick Fabbrini. “But we know we have a tougher opponent this week with our historical rival.”

Illinois’ upcoming opponent, Iowa State, had an up and down year, going 7-7 so far on the season after a 3-0 start. However, the Cyclones could be a threat when the Illini travel to Ames, Iowa, for the two-game series.

The Cyclones defended home ice well this year, besides a tough sweep at the hands of Lindenwood earlier in the year. One of the reasons why the Cyclones might have an advantage at home this weekend could be due to the rink, literally.

Iowa State competes on a smaller than regulation size rink.

The limited space will force the Illini to be sharper on offensive opportunities. Players like Thomas Kolaz and Jon Moskulak might have to be more patient with their chances and focus more on second chance put-backs. Another aspect of playing in a small, tight arena could present more defensive battles, something which would test the inconsistent, yet improving Illini defense.

The Cyclones are led by strong goalie play, rarely ever giving up more than four goals. However, with recent offensive struggles, scoring only five goals during their 1-3 stretch, the Cyclones will need to play near-perfect defense to keep up with the high-scoring Illini.

It’s unclear whether Jake Barnhart or Elliot Gerth will get the starting spot at goalie. If recent trends hold up, Fabbrini will elect to give each goalie a start. Regardless, both players have improved dramatically, each of them not allowing more than two goals in their recent games.

Illinois has the chance to get on a serious roll if they can manage to even split the series with Iowa State, with Northern Illinois and Robert Morris on deck. But the Illini know they must just focus on the task at hand.

“Guys know that we need to keep an even keel on the season,” Fabbrini said. “It is very, very long.”