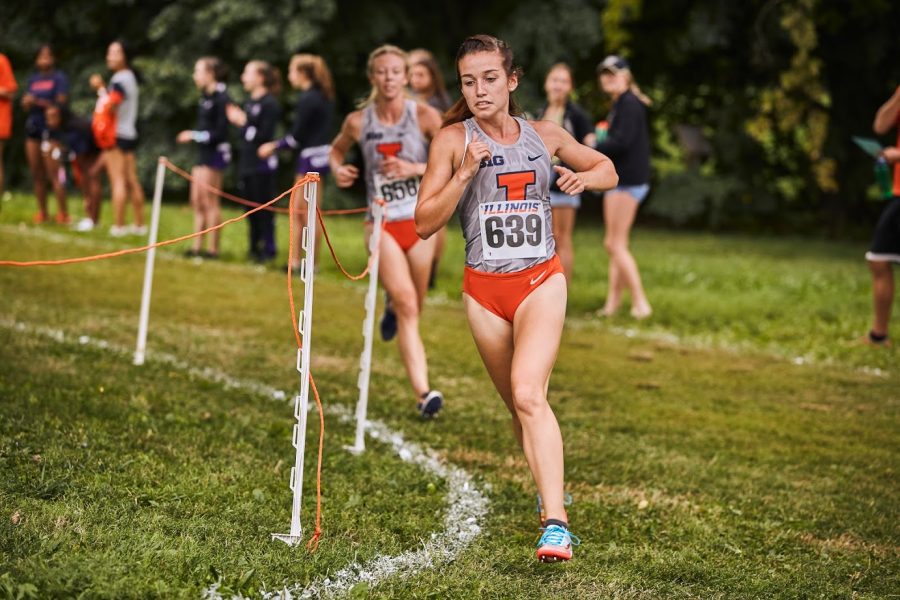 Rebecca Craddock runs at the Illini Open at the UI Arboretum on Aug. 30.

The Illinois men’s and women’s cross country team will look to build off the momentum generated from the Big Ten Championships at the NCAA Regionals this Friday in Stillwater, Oklahoma.

The men’s cross country team is coming off a ninth-place finish as a team with a score of 219 at the Big Ten Championships. Redshirt sophomore Irwin Loud and redshirt senior Zach Dale both finished in the top 25. Loud and Dale finished 21st and 24th, respectively. Loud has also finished first for the Illini in each of the five races this season.

“We know that if we do the best we can do, and have our best day, the rest will take care of itself,” Dale said. “I think we’ve got a much younger team this year, and last year, we were bummed out about our Big Ten finish coming into regionals. I think we’re in a really good spot mentally, especially the young guys have had a great attitude and been working hard.”

After an 11th place finish at regionals last year, the men’s team hopes to make the jump to nationals, despite the odds.

“It’s more of a longshot for us this year to make the national meet, but we’re going to give it everything we have,” Dale said.

The women share a similar sentiment as their male counterparts, as they look to use the Big Ten Championship as a stepping stone to greater things.

The women’s team finished sixth at the Big Ten Championships, led by junior Rebecca Craddock, who came in 18th overall with a time of 20:50.6. After improving off of last year’s 43rd place finish and 12th overall team rank, Craddock is looking to help spearhead the final push to nationals.

“We’ve been thinking about regionals all season, so it’s awesome that it’s finally here. We’re definitely mentally and physically ready for it,” Craddock said. “The momentum has been building this whole season, and in the Big Ten (Championships), we finished a lot better this year than we did last year, and we were pretty excited about that, but we weren’t really satisfied … but this year, we’ve been really good with coming back from a meet and get right into training.”

The women’s team finished in fourth place at the NCAA Regional Championships after compiling a score of 203.

“Our main goal is making it to nationals,” Craddock said. “We came close last year, and I think it was a little bit of a surprise to us last year, not a surprise, but we were definitely the underdog. And we jumped 20 spots from my freshman year to my sophomore year in cross regionals.”