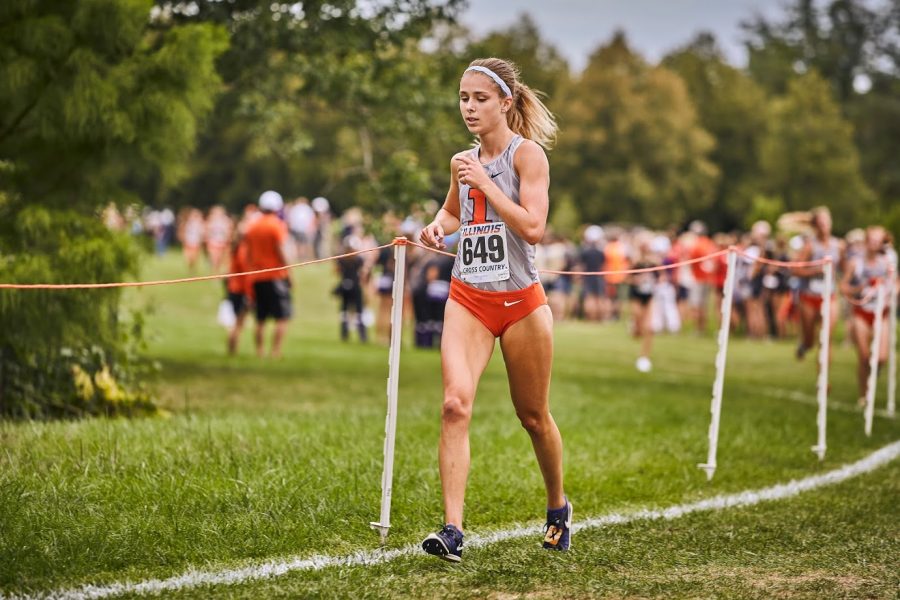 Allison McGrath runs at the Illini Open at the UI Arboretum on Aug. 30.

Continuing to build on a strong season, the Illinois women’s cross country team is going to their first NCAA Championship since 2009 after winning the NCAA Midwest Regional Championship with a score of 108 at Oklahoma State last Friday.

In her second season as head coach, Sarah Haveman is the fastest coach to win an NCAA Midwest Regional in program history, a record previously held by Karen Harvey after she won a regional five seasons into her tenure.

As winners of the regional round, the Illini automatically qualify to compete in Terre Haute, Indiana, home to Indiana State University, where the championships will be held.

“Our women were great,” Haveman said via fightingillini.com. “This was a new position to be in to have to enter a meet as the favorites. We have thrived on being an ‘underdog’ and have been able to gain excitement and momentum by beating people that maybe we shouldn’t. But today we had to prove that we are more than that and that we could come into a meet ranked first and hold our ground. They commanded the field, leading at every split and at the finish. Most importantly, they ran for each other every step of the way.”

Illinois put the rest of the nation on notice, coming into regionals as the No. 1 ranked Midwest team and No. 22 nationally by finishing with four runners with Midwest All-Region honors, according to the USTFCCCA.

Junior Allison McGrath finished first for the Illini, her second time in as many years doing so, and placed 12th overall at 20:58.5 while sophomore Madison Marasco finished 18th overall, clocking in at 21:12.8, as both women notched their second consecutive All-Region honors. Junior Rebecca Craddock came in 14th overall with a time of 21:04.4, while sophomore Emma Milburn finished 25th overall with a time of 21:20.0. Both runners earned the first Midwest All-Region honors of their careers.

The second-place team at regionals, Tulsa, also clinched a spot at nationals and will compete against the other top-two finishers across nine regions, as well as a few at-large teams that undergo a selection process.

“It’s not a sport where you can play defense,” Haveman said. “So we ultimately need to just focus on doing what we do well and making sure that we are running for one another and performing the way we have to.”

The championships will be held at the LaVern Gibson Championship Cross Country Course on Saturday with the women’s 6k scheduled to begin at 10:15 a.m. The race can be streamed with a subscription to FloTrack.org.