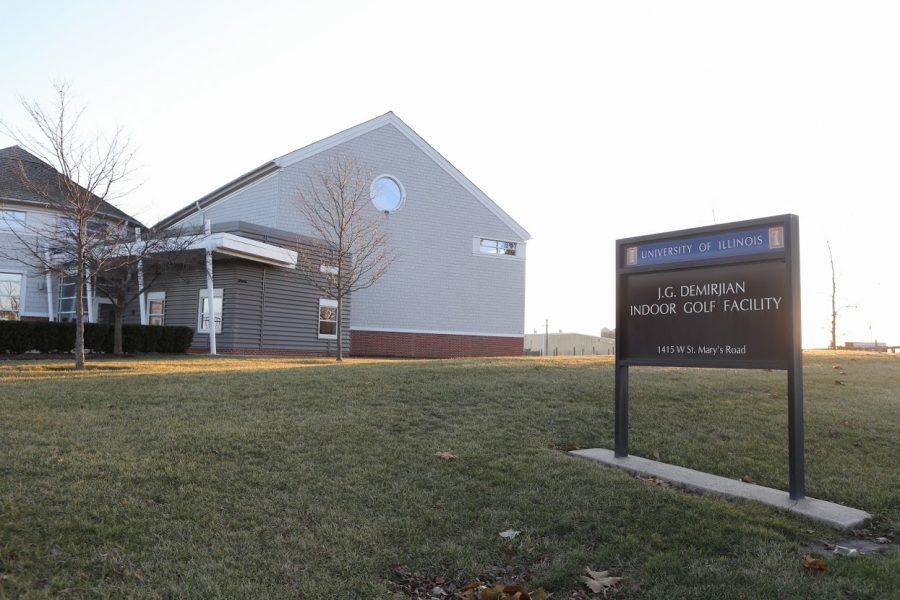 The exterior of the J.G. Demirjian Indoor Golf Facility on St Marys Rd on Dec. 3

Home of the Illinois men’s and women’s golf teams, the Demirjian Golf Practice Facility is a 14,000 square foot golf center that allows unparalleled possibilities for Illini golfers to improve their game year-round.

Located near the southern edge of campus on St. Marys Road and adjacent to Lauritsen/Wohlers Outdoor Golf Practice Facility, Demirjian is equipped with six heated hitting bays to practice long shots during the winter, two of them utilizing high tech video analysis systems. The main feature consists of a 6,300 square foot indoor putting, chipping and pitching area for practicing tricky short game shots from any angle and putting with realistic break and movement. In addition to golf amenities, the facility also features two full locker rooms, a golf club repair room, a team lounge and a study area.

Construction on the $5.2 million facility was privately funded, mostly by the Demirjian family, and finished in time for the 2008 season. Prior to its completion, there was no substitute for the non-existent golf practice facilities.

“We built a small 140-yard practice spot at the Orange and Blue course to hold us over until Demirjian was finished,” said men’s head coach Mike Small, who was a part of Demirjian’s conception since he was made head coach in 2001. “This place serves as a home for our athletes where before we had team meetings in parking lots with people walking by; we had to distribute equipment out of the trunk of my car. We had nothing.”

Practices also used to be held on an old handball court in the basement of Huff Hall next to a boiler room.

Now the Illinois golf teams enjoy one of the finest practice facilities in the country and can offer prospective recruits a world-class golf experience.

“This building shows recruits and the current team the commitment that the University has given to them to help them build their games and maximize their potential in the game of golf,” Small said. “It shows everyone that we, the University, administration and coaches, are doing our best to ensure the student athletes do their best.”

The golfers themselves have been utilizing Demirjian to its full potential as the men’s team has advanced to the NCAA championship every year since its completion, taking home four consecutive championships from 2013-2016.

“You can do anything out here,” said sophomore Tommy Kuhl. “You can hit any shot and work on every part of your game. I don’t think it can get much better than this.”

The women’s team saw an instant boost in success once it had access to Demirjian, winning the team’s first tournament and continuing that momentum to collect 72 top-five tournament finishes and 14 wins in 13 seasons while under the leadership of head coach Renee Slone. Slone, a graduate of Illinois’ class of 2001, enjoyed her own success with the program, winning Big Ten Player of the Year twice and holding Illinois’ stroke average record for nearly 25 years, among a long list of accolades.

“I feel very grateful to the Demirjian family and other donors who invest in the student-athletes at this school,” Slone said. “With the indoor and outdoor facilities complementing each other, the possibilities are endless.”

The Lauritsen/Wohlers Outdoor Facility, which cost around $2 million, was finished in 2015 and modeled after Augusta National which hosts the Masters tournament each April. Designed by golf course architect Jeff Brauer and Small, the outdoor training course consists of 24 acres of fairways, greens, bunkers and chipping areas. With Demirjian and Lauritsen/Wohlers at their fingertips, Illinois golfers can practice just about any shot.

Demirjian hasn’t seen any additions since it opened in 2008 and didn’t cost as much as other Illinois Athletic facilities.

Memorial Stadium cost around $25 million for construction and was given a $121 million renovation in 2008. State Farm Center, opened in 1963, cost around $70 million; the Illinois Field cost around one million and its renovations cost about $800,000. Most recently, the Demirjian family has donated an additional $7 million dollars for the construction of a new soccer and track and field facility carrying their namesake. Named Demirjian Park, the project is slated for a spring 2021 completion and will feature two soccer fields, a renovation of the track and field complex, as well as a new stadium that will house team amenities for Illini soccer and track and field.

Since Small’s arrival, his goal was to set a high standard for the golf program as well as improve the team’s facilities.

“This building commands class and uniqueness but it also serves a point,” Small said. “It’s very functional. (There’s) not a lot of wasted space. It’s not just a bunch of eye candy. It’s very specific to how we want our players to improve their games.”

In a sport traditionally dominated by southern schools with the advantage of warm weather year-round, Demirjian was essential in solidifying Illinois as an elite golf school.

Looking ahead, Small recently released the team’s spring schedule. Illinois’ calendar is littered with cross country tournaments, sending the team to places such as Ohio, Louisiana, Arizona and Hawaii will begin on Feb. 1.

The Big Ten Championship will be held in Sugar Grove, Illinois, on May 1-3, while the NCAA regionals will begin on May 18 at a yet-to-be-determined golf course. In addition to the schedule, the Illini also announced the addition of Wisconsin native Piercen Hunt to the roster.

Hunt, who’s fresh off winning the 2019 Western Junior, is listed at No. 22 in the American Junior Golf Association rankings and was named the Wisconsin Golf Coaches Association High School Player of the Year three times. Hunt will join the Illini in time for their spring debut at the Tinervin Cup Alumni Match in Placida, Florida.