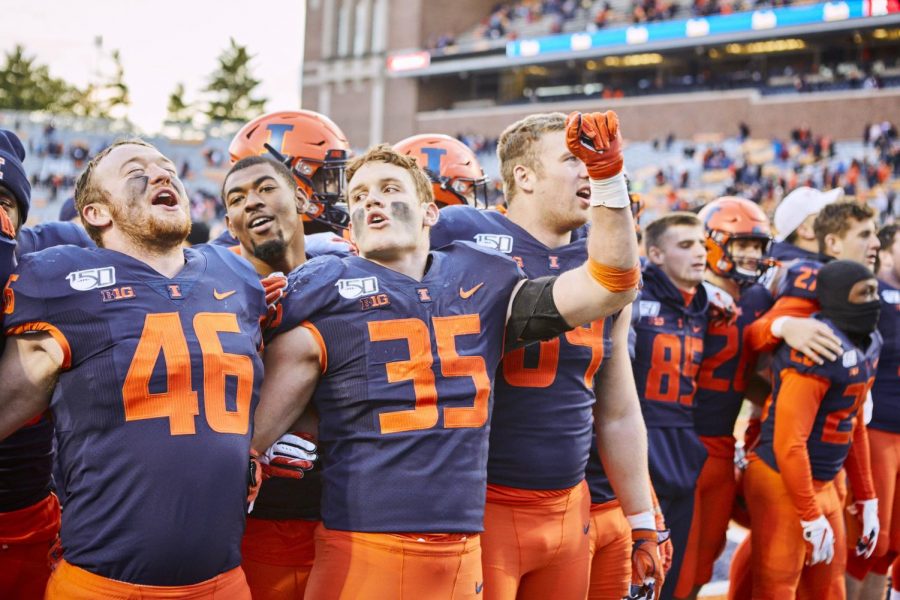 Members of the Illinois football team celebrate after defeating Rutgers 38-10 at home. Captured at Memorial Stadium on 02 Nov. 2019 by Jonathan Bonaguro.

The Illinois football team is headed to the RedBox Bowl in Santa Clara, California, and will face Pac-12 foe California (7-5, 4-5) on Dec. 30 at Levi Stadium at 3 p.m. CT. Illinois earned a bowl bid for the first time under head coach Lovie Smith, marking the program’s first post-season appearance since 2014 and 19th in program history.

“The University of Illinois is thrilled to accept the invitation for our football team to participate in the 2019 Redbox Bowl,” said Illinois Director of Athletics Josh Whitman, per fightingillini.com. “The game features a traditional Pac-12 opponent, one of our country’s great stadiums, an advantageous date, and a premier television partner. We are excited for our players and fans to experience the San Francisco Bay area, which is home to our University’s second-largest largest concentration of alumni. We hope Fighting Illini faithful from across the country will join us in California to celebrate a memorable season and help our team in its push for win number seven.”

The Illini finished the season with a 6-6 overall record and 4-5 record in the Big Ten with notable wins over No. 6 Wisconsin, 24-23, and a 27-point fourth-quarter comeback over Michigan State.